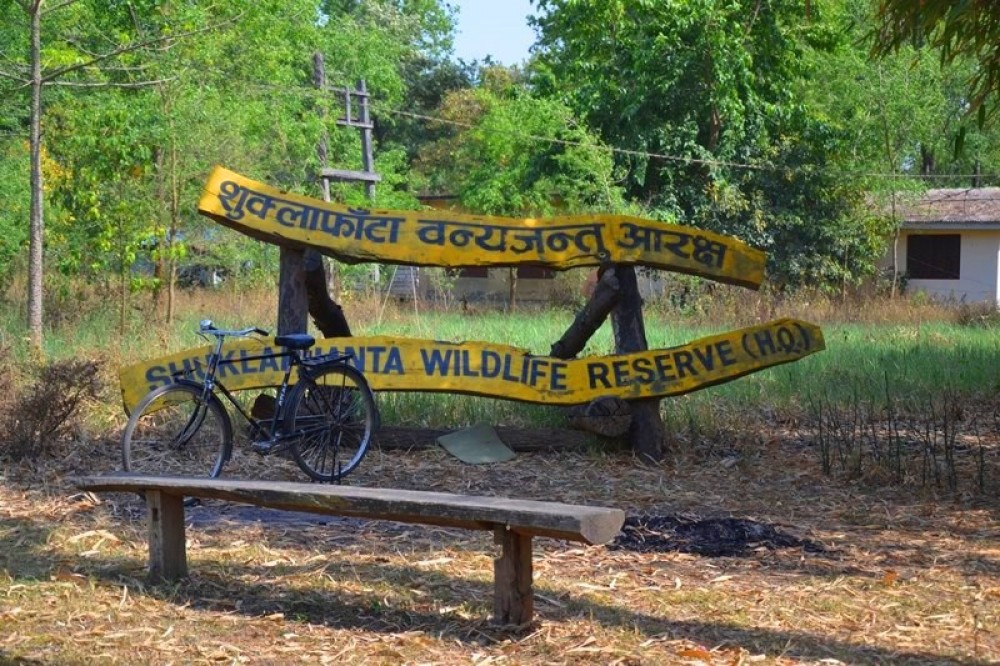 Shuklaphanta National Park is a protected area in the Terai of the Far-Western Region, Nepal, covering 305 km2 (118 sq mi) of open grassland, forests, riverbeds and tropical wetlands at an altitude of 174 to 1,386 m (571 to 4,547 ft).It was gazetted in 1976 as Royal Shuklaphanta Wildlife Reserve. A small part of the reserve extends north of the East-West Highway to create a corridor for seasonal migration of wildlife into the Sivalik Hills. The Syali River forms the eastern boundary southward to the international border with India, which demarcates the reserve’s southern and western boundary.

Some 700 species of flora are estimated in the park including 553 vascular plants, 18 pteridophytes, 410 dicots and 125 monocots. Grassland constitutes almost half the reserve's vegetation. The main grass species are Imperata cylindrica and Heteropogon contortus, khagra reed (Phragmites karka) and Saccharum spontaneum grow in the marshes surrounding the seven small lakes. The dominant forest type is sal. Khair and sissoo grow alongside rivers. Grassland encroachment by tree and shrub saplings is major threats to the long-term existence of the main phantas. Trees outcompete any grasses growing under them, especially those that need plenty of sunlight. Tree seeds are dispersed all over the grasslands and generally germinate near existing trees. Additionally, trees encourage the growth of shade-loving grasses and inhibit growth of sun-loving species. This process of succession usually converts grassland into woodland over time.

The extensive open grasslands and wetlands around the lakes of the park are habitat for a wide range of fauna. In the rivers, lakes and ponds 28 fish species and 12 reptile and amphibian species were recorded. These include mahseer and rohu, mugger crocodile, Indian rock python, monitor lizard, Indian cobra, common krait and Oriental ratsnake.

Current checklists include 46 mammal species, of which 18 are protected under CITES such as the Bengal tiger, Indian leopard, sloth bear, swamp deer, elephant and hispid hare. Great one-horned rhinoceros were translocated from Chitwan National Park to establish a third viable population in the country.

The congregation of swamp deer in the park's grasslands is the largest in the world; the population of hispid hare may be of international significance. As of 2013, there were 2,170 swamp deer in the reserve. In spring 2016, a rusty-spotted cat was photographed by a camera-trap for the first time in the protected area.