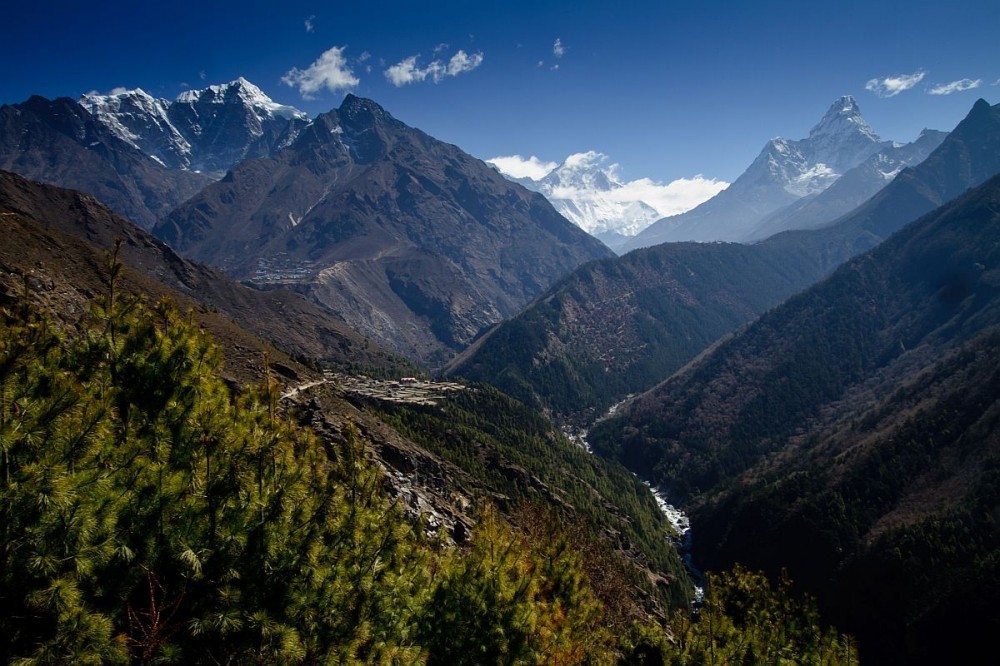 Hub of three top tenners mountain including top of the world

Sagarmatha National Park extends over an area of 1,148 square kilometers of the Himalayan ecological zone in Khumbu region of Nepal. The Park includes the upper catchments areas of the Dudhkoshi and Bhotehoshi Rivers and is largely composed of rugged terrain and gorges of the high Himalayas, ranging from 2,845m at Monjo to the top of the world's highest peak- Sagarmatha at 8,848m above the sea level. Other peaks above 6,000m are Lhotse, Cho Oyu, Thamserku, Nuptse, Amadablam and Pumori. For its superlative natural characteristics, UNESCO has enlisted SNP as a World Heritage Site in 1979.

The Park’s core area covers the upper headwaters of the Bhote Kosi, Dudh Kosi and Imja Khola rivers which fan out under the crest of the Himalaya Mountains on the Tibetan border and meet near the area’s main settlement, Namche Bazar. The buffer area reaches down the Dodh Kosi valley to Lukla 18 km south of Namche. The Park is enclosed by high mountain ranges and lies over extremely rugged terrain, deeply incised valleys and glaciers culminating in Sagarmatha / Mt.Everest, the world’s highest mountain. The catchments are ringed by 25 or more peaks over 6,000m, and seven - Baruntse, Lhotse, Nuptse, Pumo Ri, Guachung Kang, Cho-Oyu, and Nangpai Gosum - over 7,000m high. The rivers are fed by the long glaciers at the head of each valley: Nangpa Glacier on the Bhote Kosi, Ngozumpa Glacier on the Dodh Kosi, Khumbu Glacier on the Lobuje Khola and the Imja Glacier, one of eight which feed the Imja Khola under Sagarmatha.