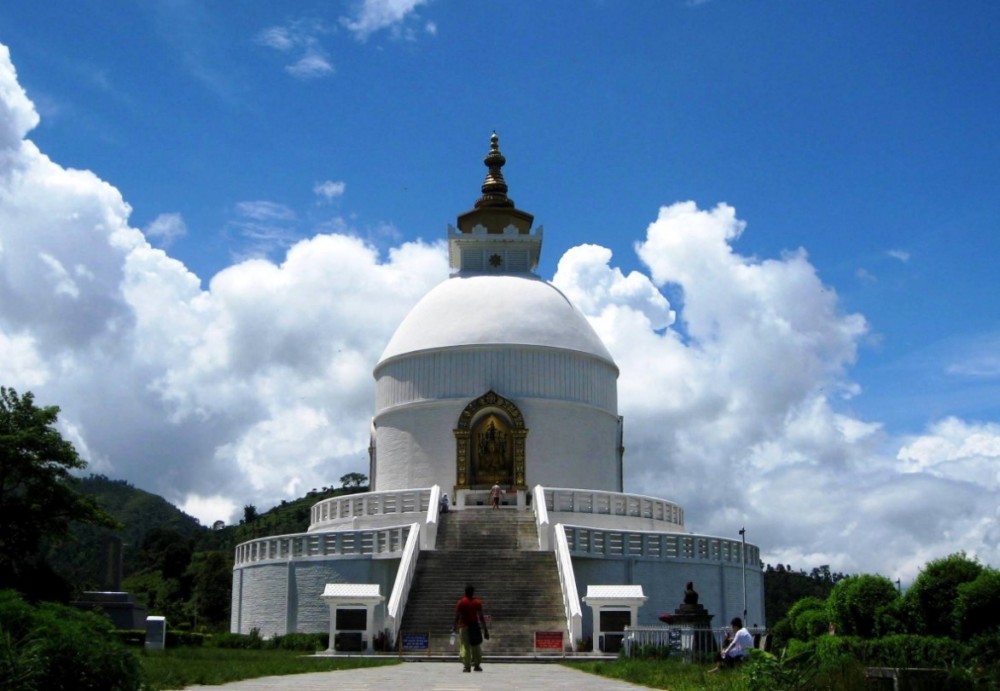 Pujas and rituals take place daily in the Dhamma hall and on auspicious occasions according to the lunar calendar like full moon day, Budhha Janmashtami (birthday of Lord Buddha), huge pujas are conducted.

In 1947, Nichidatshu Fuji, a Buddhist monk from Japan, decided to construct peace pagodas in different locations of the world as a symbol of World Peace. Among 80 monuments around the world, two peace pagodas situate in Nepal – one in Lumbini, the birthplace of Lord Buddha, and the other one in Pokhara. The peace pagoda in Pokhara was the 71st among all the stupas while it was the first one built in Nepal.

'Shanti' is a Sanskrit word translating to 'Peace' whereby it got its name Shanti Stupa (Peace Pagoda). As the name suggests, the place is serene and peaceful, standing 115 feet tall on a 344 feet diameter. Built in traditional pagoda style, the architecture itself is simple yet striking. The white painted monument sits on top of Anandu hill in Pumdi Bhumi, Kaski, Pokhara. At the very top of the pinnacle is the gajur, a pointed golden structure. The architecture makes it visible even from a distance, standing tall with grace and its unique beauty.

CONSTRUCTION OF THE STUPA

Built by Nipponzan Myohoji and the locals of Pokhara built the peace pagoda. Morioka Sonin was the one who took the initiative of the construction. Also, Min Bahadur Gurung, the first elected deputy defense minister, donated the land on which the pagoda is built. Therefore, there is a statue of him adjacent to the peace pagoda for his contribution. With continuous support and the persistence of Nipponzan Myohoji, monks, and the local supporters, despite hurdles that came on the way of the construction, the peace pagoda was finally completed and inaugurated in 1999, making it open to the public.

Climbing the tapering stairway, one can reach on top. The Shanti Stupa has two tiers for tourists and pilgrims to circumambulate. The main feature of the pagoda, the statues of Buddha, are displayed on the second tiers. These were the souvenirs from different countries: 'Dharmachakra Mudra' from Japan, 'Bodh Gaya' from Sri Lanka, 'Kushinagar' from Thailand, and 'Lumbini' from Nepal. These magnificent statues represent the prominent events of Buddha's life and are named according to where they took place. Right below the pinnacle is the Dharmachakra, which symbolizes the wheel of life, dharma, and the teaching of Buddha. The golden gajur on the top houses within, a crystal stone from Sri Lanka, signifying intellect and grace.

There is a prayer hall named Dhamma hall located near the pagoda with a statue of Buddha having 12 guest rooms, which was the first building that stood on the site. Pujas and rituals take place daily in the hall and on auspicious occasions on important dates according to the lunar calendar like full moon day, Budhha Janmashtami (birthday of Lord Buddha), huge pujas are conducted.

The site is an aura of calmness and is a perfect spot to view the sunrise and sunset. Moreover, standing on the hilltop amidst the lush green forest, it also serves as a spectacular vantage point of the panoramic views of the Phewa lake and the Pokhara city. On clear days, one can also get a splendid view of the Annapurna Mountain Range.

There are several ways to reach the Shanti Stupa. One can opt for any alternative according to their choice: the hiking trails, cycling tracks, or the road.

The popular one is the drive of about 30 mins on the paved road from Lakeside, followed by a 10 mins walk up to the Peace Pagoda.

Another option is getting a small boat from the shore of Lakeside across the Fewa Lake. On reaching the bank, the hiking path goes through a thick forest with uphill stairs, which also a reviving nature walk up to the Shanti Stupa.

There is no entrance fee and open to all visitors and pilgrims from around the world. However, one can surely donate some amount for the maintenance and renovation works of the Stupa.

5 Things to do in Bouddha