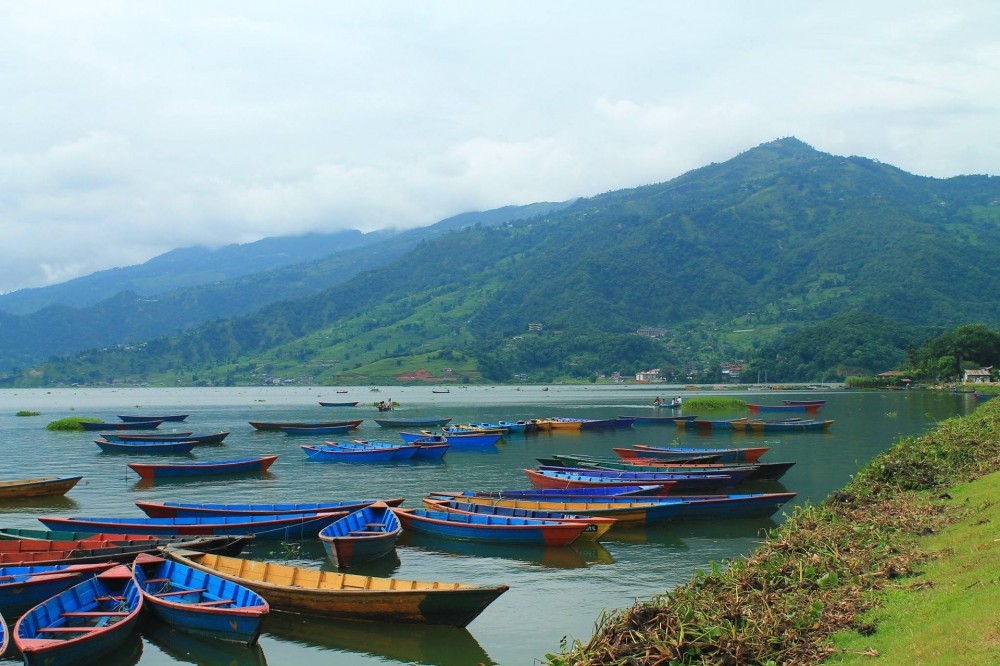 Basically, Pokhara city is sorrounded of many ponds and lakes but Phewa, Begnas and Rupa lake are the biggest and famous one.

Phewa Lake, Phewa Tal or Fewa Lake is a freshwater lake in Nepal formerly called Baidam Tal located in the south of the Pokhara that includes Pokhara city; parts of and Kaskikot The lake is stream-fed but a dam regulates the water reserves, therefore, the lake is classified as semi-natural freshwater lake. It is the second largest lake in Nepal; the largest in Gandaki pardesh after the Rara lake in the comparison to Nepal's water bodies. It is the most popular and most visited lake of Nepal. It is the only lake in Nepal to have a temple Tal Barahi  at the central part of lake. Phewa lake is located at an altitude of 742 m (2,434 ft) and covers an area of about 4.43 km2 (1.7 sq mi). It has an average depth of about 8.6 m (28 ft) and a maximum depth of 24 m (79 ft). Maximum water capacity of the lake is approximately 43,000,000 cubic metres (35,000 acre⋅ft). The Annapurna range on the north is only about 28 km (linear distance) away from the lake. The lake is also famous for the reflection of mount Macchapuchre and other mountain peaks of the Annapurna and Dhaulagiri ranges on its surface.The Tal Barahi Temple is situated on an island in the lake. 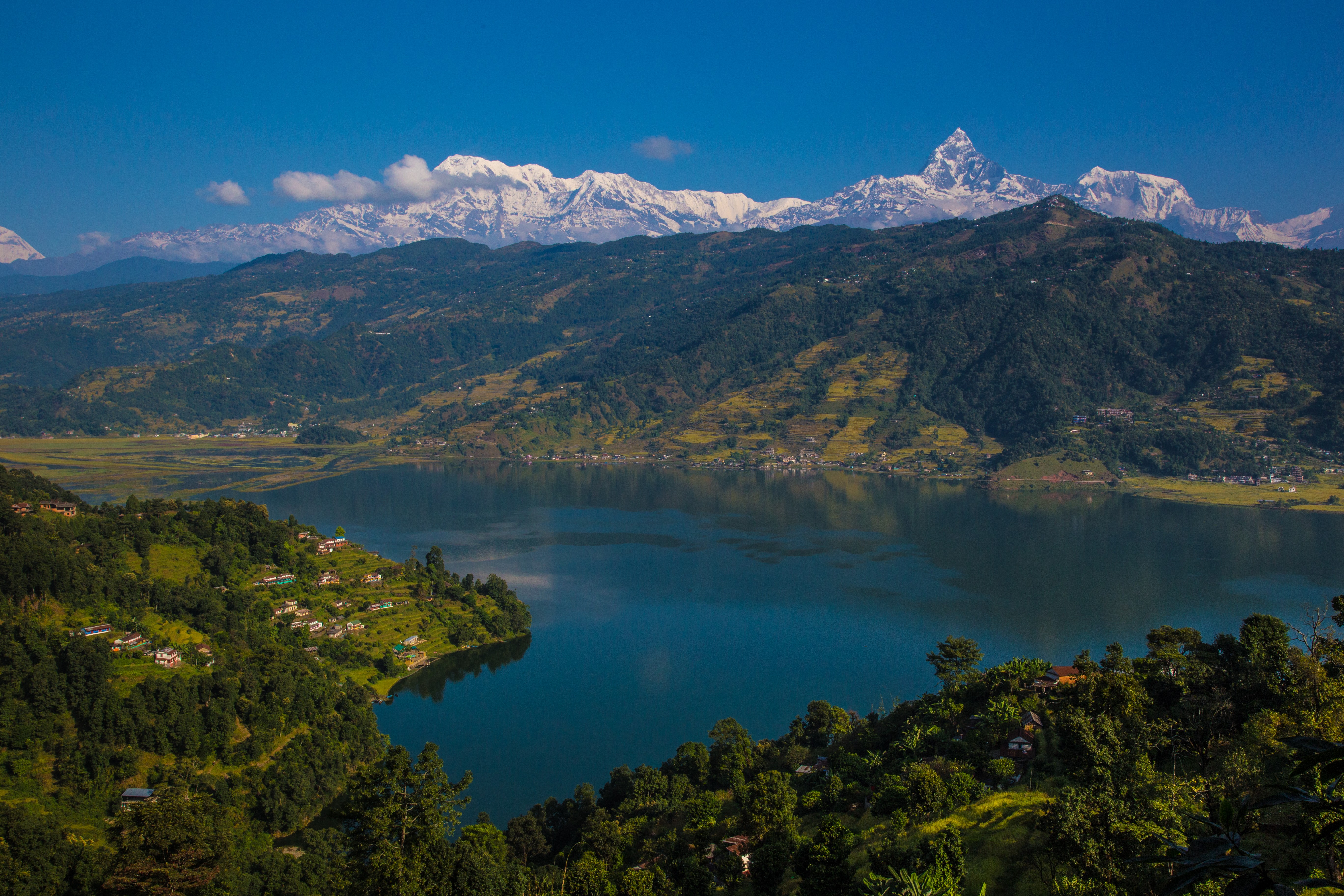 Begnas Lake is a freshwater lake in Lekhnath metropoltian city of Kaski district of Nepal located in the south-east of the Pokhara valley. The lake is the third largest lake of Nepal and second largest, after Phewa lake, among the eight lakes in Pokhara valley. Water level in the lake fluctuates seasonally due to rain, and utilization for irrigation. The water level is regulated through a dam constructed in 1988 on the western outlet stream, Khudi Khola.

Begnas Lake area with a number of resorts is a popular destination for tourists visiting Pokhara. The water from the lake is used for irrigation and some parts of the lake are used as caged fisheries. The Begnas lake area has a number of swampy areas around it, many of which have been converted to paddy fields. 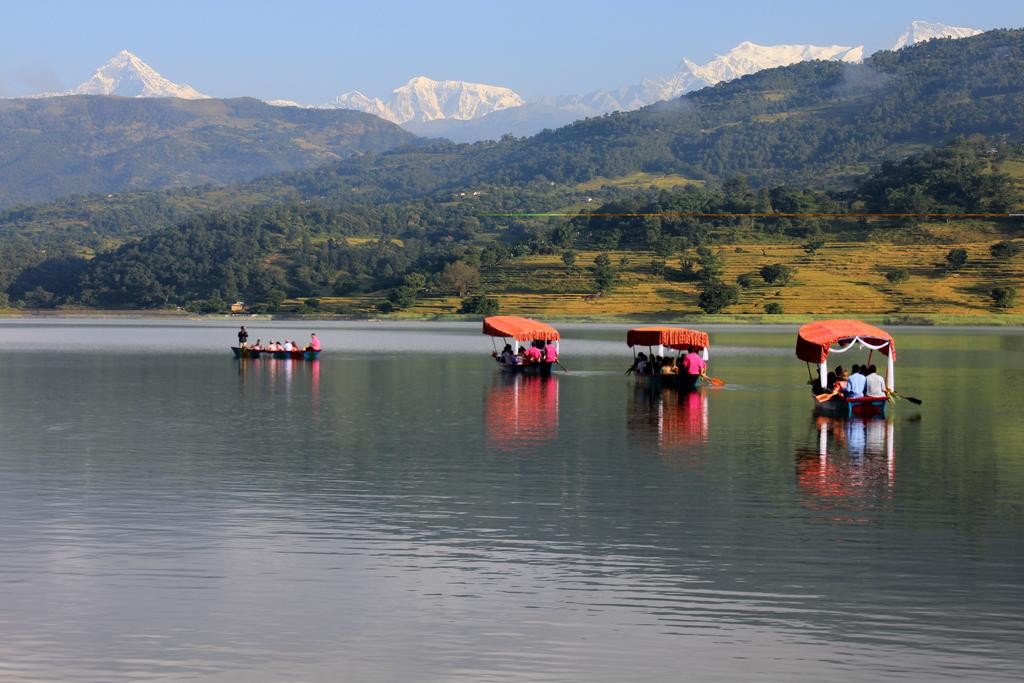 Rupa Lake or Rupa Tal is a freshwater lake in Nepal located in the Pokhara metropolian city. It is the third biggest lake in Pokhara valley of Nepal and at an altitude of 600 m (1,969 ft) covering area about 1.35 km2 (0.5 sq mi) with an average water depth 3 m and maximum depth 6 m. The lake is elongated north to south and is fed by perennial streams. Its watershed area is 30 km², where The main inflow of water is from Talbesi stream, whereas Dhovan khola is the feeder stream with its outlet Tal khola at Sistani ghat. It supports a number of floral and faunal species. A total of 36 species of waterbirds have been recorded in the lake which represents about 19 percent of the total 193 wetland-dependent birds found in Nepal.

Rupa lake is the one of main tourism attraction among Begnas lake of the Pokhara city. It provides enough space for boating experiences for national and international visitors. Cage culture as well as pen culture have been practiced in Rupa lake for fish farming. Farmers in the Kaski district of Nepal have formed the Rupa Lake Rehabilitation and Fisheries Cooperatives Limited to help protect the watershed.