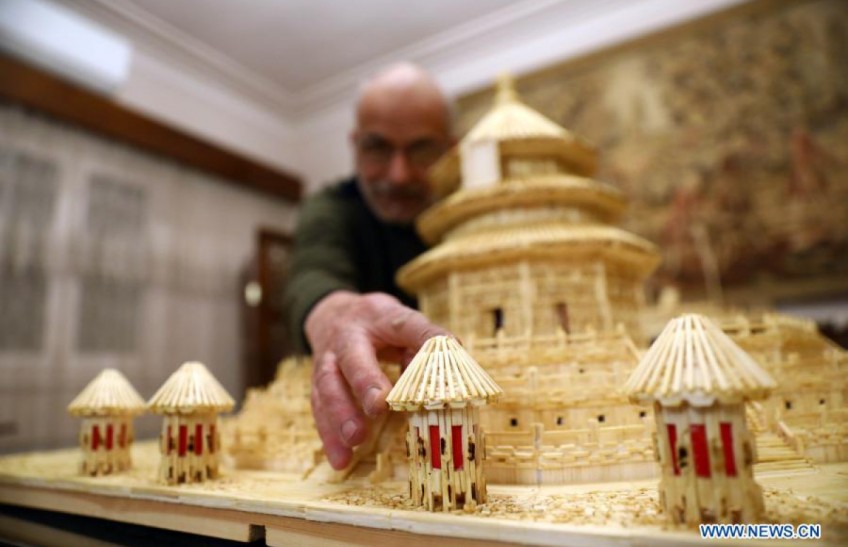 Hassan spent more than two months working on the Temple of Heaven, and finished the whole replica using 22,000 matches.

Egyptian radiologist Ahmed Hassan liked the design and architecture of China's remarkable Temple of Heaven so much that he decided to build a replica of Beijing's historic monument with matchsticks.

In his free time, while exercising his hobby of building models of landmarks with matchsticks, Hassan spent more than two months working on the Temple of Heaven, until he finished the whole replica using about 22,000 matchsticks. The 63-year-old man has recently been putting the final touches on the matchstick-designed Temple of Heaven at his home in the main street leading to the Pyramids of Giza near Egypt's capital Cairo.

"Although I haven't yet been to China, I liked the pictures of the temple so much. I also read about the temple and its historical background, and I found that it is one of the key landmarks and tourist attractions of the Chinese capital Beijing," Hassan told Xinhua at his home. Built-in 1420, the Temple of Heaven was where Ming and Qing Dynasty emperors worshipped heaven for good harvests. It was turned into a public park in 1918.

The 600-year-old monument covers an area of 270 hectares and is considered one of the largest existing architectural complexes in the world. Just as the original circular building is completely wooden with no nails, the Egyptian radiologist used only matchsticks, white glue and a cutter blade to build the replica of the temple.

"Even the unapparent supports and structures are all made of matchsticks," he noted. Hassan, who returned to his old hobby in 2013, produced more than 20 replicas of monuments from Egypt, Britain, France, Denmark and Russia over the past few years. He said that building a matchstick model of the Temple of Heaven wasn't an easy job, for it is his first time to carry out a replica of a landmark from Asia in general and China in particular.

He expressed his admiration of the Chinese culture and hailed the closeness and friendly relations between Egypt and China. "China is a great civilization that is extended throughout history," said the Egyptian artist, expressing his happiness that his work was accomplished amid the celebrations of the Chinese New Year.