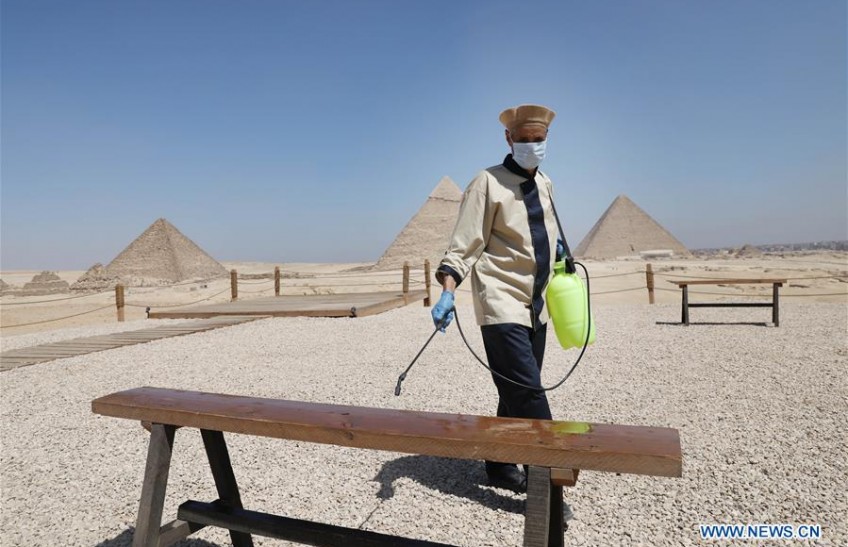 Egypt received 126,000 tourists since it reopened its seaside resorts to international flights and foreign tourists on July 1, after a three-month halt due to the coronavirus pandemic, Egyptian Minister of Tourism and Antiquities, Khaled al-Anany, said.

The Egyptian minister said this "great achievement" demonstrates the success and efficiency of the procedures introduced by his ministry, according to state-run Ahram Online news website. Madbouly said the virus hit the world at a time when Egypt's tourism was breaking its own records in terms of the number of arriving tourists.

"It will take some time to pick up the same pace due to tourists' reluctance to travel at this time," the prime minister said. He stressed that Egypt's policies target maintaining a balance between the requirements of health and the economy.

Egypt, which has so far registered 97,340 COVID-19 infections and 5,262 deaths, resumed international flights in early July, after it lifted a partial curfew it has been imposing since late March, and reopened restaurants, cafes, theaters and cinemas, as well as hotels, museums and archeological sites, all with limited capacity.

About 600 hotels nationwide were allowed to reopen, having met the safety protocols announced by the authorities and at a reduced occupancy of 50 percent.

The North African country, which has been witnessing a sharp decline in daily COVID-19 deaths and infections, also decided to reopen archeological sites, hotels and museums in the monument-rich city of Luxor for tourists from the beginning of September.

All travelers coming to Egypt will have to present a recent PCR test that proves they are free from COVID-19 as of September 1.

Earlier in the day, Egyptian President Abdel-Fattah al-Sisi and Pololikashvili discussed the recent prominent tourism projects in Egypt amid the coronavirus outbreak. During their meeting in Cairo, Sisi highlighted Egypt's strategy to resume tourism under precautionary measures set by the Ministry of Tourism and Antiquities in coordination with all concerned parties, which aims at achieving a balance between the return of tourism in Egypt, and ensuring the safety of tourists and workers in the tourism sector, Egyptian Presidential Spokesman Bassam Rady said in a statement.

For his part, Pololikashvili praised the Egyptian efforts to gradually receive foreign tourists, as well as the unprecedented support provided by the government for the tourism sector, which is one of the pillars of the Egyptian economy.

Tourism is one of the main sources of national income and foreign currency in Egypt. The country's tourism revenues hit a record high of USD 13 billion in 2019.

Experts believe that the visit of the UNWTO chief is of great importance for the Egyptian government which is working hard to resume tourist activities in the country in order to compensate the losses the sector has inflicted since the outbreak of the pandemic in mid-February.

"This visit is highly important... it is the best promotion made recently to visit Egypt," Mohammed Othman, deputy chairman of tourism chamber in Upper Egypt, told Xinhua. He noted that the visit proves that the government's plans and measures have succeeded to keep the tourism sector alive and ready to receive foreign and local tourists once again.

Othman expected that tourism will revive within the next two months, expressing hope that an anticipated boom would help the industry compensate the losses inflicted in the past few months. "I also hope that the Chinese tourists, who used to come in big numbers, would make Egypt one of their favorable destinations again," he said.

Prohibitory Orders In Effect In 47 Districts