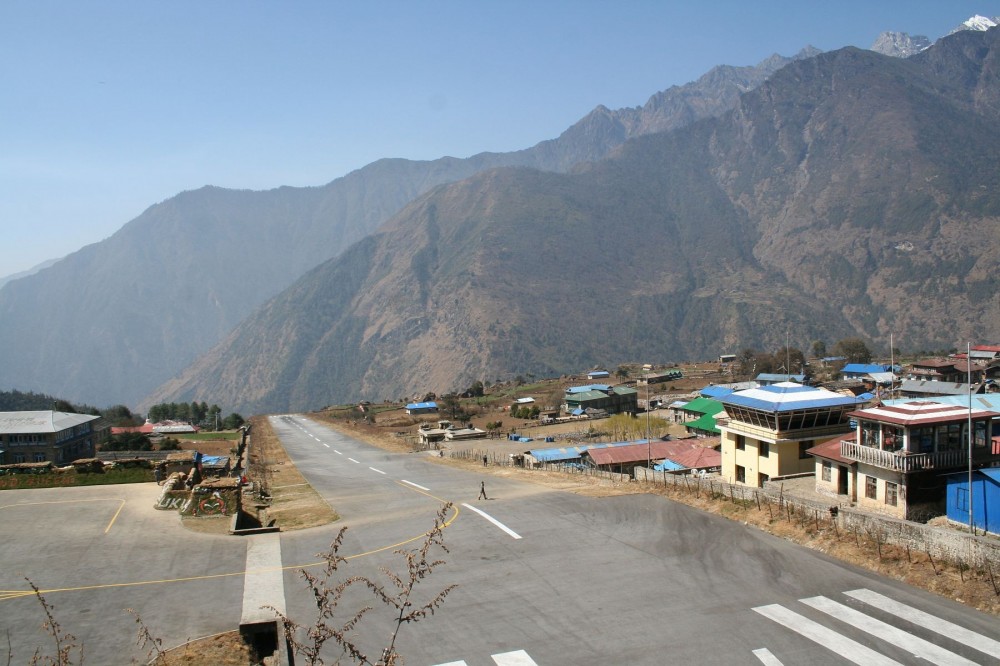 With a small runway of 1729 ft, Lukla is one of the busiest domestic airports in Nepal owing to its popularity as the nearest airport to Mount Everest.

Officially delivering service as Tenzing-Hillary airport, it was constructed under the leadership of Tenzing Norgay and Edmund Hillary in the 60s. It is used extensively because it is the place where most treks to Everest begin.

There are daily regular flights between Lukla and Kathmandu provided the weather is good. However, owing to rains, high winds, cloud cover, and changing visibility in Lukla, many times flights get delayed, and sometimes in serious weather conditions the airport even closes down. A program titled the “Most Extreme Airports”, broadcast on The History Channel in 2010 rated the airport as the most dangerous airport in the world for more than 20 years.

It is said that Hillary was unhappy with the runway's soil resistance and that his solution was to buy local liquor for the Sherpas and ask them to perform a foot-stomping dance to flatten the land that served as the runway. The runway was not paved until 2001.

The airport was renamed in honor of Sherpa Tenzing Norgay and Sir Edmund Hillary, the first men to reach the summit of Mount Everest, and also for their efforts to construct the airport.

The airport's paved asphalt runway is accessible only to helicopters and small, fixed-wing, short-takeoff-and-landing aircraft such as the De Havilland Canada DHC-6 Twin Otter, Dornier Do 228, L-410 Turbolet, and Pilatus PC-6 Turbo Porter. The IATA and ICAO codes are LUA and VNLK respectively.

Situated at an elevation of 9,334 ft, the airport is used for passenger flights and for transporting most of the building materials and cargo to Lukla and other towns and villages to the north of Lukla, as there is no access by road to this region.

Arriving and departing aircraft must use a single runway. There is a low prospect of a successful go-around on a short final approach due to the terrain as there is high terrain immediately beyond the northern end of the runway and a steeply angled drop at the southern end of the runway into the valley below. Due to high elevation and short runways, the airport faces thin air and lesser landing time.

The Civil Aviation Authority of Nepal has set high standards, according to which only experienced pilots, who have completed at least 100 short-takeoff-and-landing (STOL) missions having over one year of STOL experience with 10 successful flights in Nepal are allowed to land at the airport.