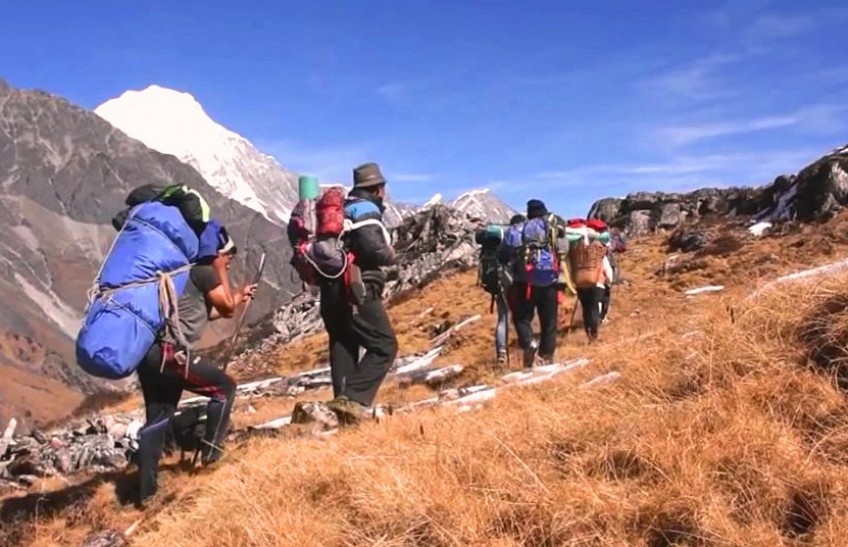 Construction of roads in a haphazard manner, sometimes infringing on the popular tourist trekking routes, is posing a challenge to trekking tourism.

Construction of roads in a haphazard manner, sometimes infringing on the popular tourist trekking routes, is posing a challenge to trekking tourism.
Although Nepal has made an international mark in trekking tourism, this new problem is posing a challenge in recent days.
Hit by various natural disasters and recently dented by the COVID-19 pandemic, the tourism sector which is trying to rise up recently has been facing this new problem, according to the tourism entrepreneurs.
The trekking routes are being destroyed with the construction of motorable roads in a rampant and unplanned manner these days.
"Construction of motorable roads encroaching upon trekking routes has not only shortened the distance of trekking routes, but it has also caused concern as it is disturbing the 'unique experience' of trekking in a noise-free natural setting," Trekking Agencies Association of Nepal (TAAN)'s West Regional Association president  Sushil Raj Poudel said.
More than 70 percent of foreign tourists visiting Nepal come for trekking and mountaineering purposes.
Poudel said the road expansion that is going on in an unplanned manner has added to their concerns that lest it ruins the trekking tourism itself.
Haphazard construction of roads along the trekking routes has, besides increasing the risk of landslides, has posed serious challenges to trekking tourism, Poudel expressed his concern.
The trekking tourism entrepreneurs have said that although they have drawn the attention of the local units not to construct roads in an unplanned manner by infringing on the traditional trekking routes that are popular among the foreign trekkers, their requested have gone unheeded. This has resulted in the trekking routes becoming shortened.
TAAN has been calling for declaring the trekking sector as a protected sector with the objective of preserving the trekking routes and promoting trekking tourism.
Hundreds of families living in settlements as Syong, Jagat, Chyamse, Dharapani, Dhikurpokhari, and Chame, among other places lying close to the Round Annapurna Trekking Route, whose living is dependent on trekking tourism in recent years, are on the verge of becoming displaced from their profession due to the shortening of the trekking routes.
The Round-Annapurna trekking route is among the world's 10 best trekking destinations. Before it used to take 21 days to trek along this route from Beshisahar to Naya Pul, but now it has been cut short to five to seven days with the construction of roads and vehicles reaching various places along this route.
The route that starts from Beshisahar ends at Naya Pul in Pokhara passing through Muktinath, Jomsom, Tatopani Ghorepani, and Birethanti.
The Tatopani-Chitre trekking route which used to take two days on foot can now be traversed in three hours by vehicle these days.
Similarly, the duration of trekking along the Naya Pul-Ghandruk trekking route has been shortened to one hour if one traveled by car up to Kimte.
Similarly, the trekking route towards Annapurna Base Camp, Ghandruk, and Landruk via Dhumpus, as well as the Naya Pool-Ghorepani trekking route have been limited to one or two hours trek. Earlier it took one or two days to reach the destinations via these trekking routes.
Tourism entrepreneurs said that protection of trekking routes around Annapurna Base Camp, as well as publicity of different trekking routes developed in recent period Pokhara Khayerlek, Pokhara Hiddenlek, Terila Pass, Gurung Heritage Trail, was necessary.
Though there are dozens of best trekking routes including Upper Mustang, Annapurna Circuit Trek, Annapurna Security Trek, Ghandruk Ghorepani Circuit Trek, Ghalekharka Circuit Trek, Round Manaslu, Ghandruk, Ghampus, Jomsom, and Narphool, it is seen that the existence of the trekking route would be in crisis in near future if the trend of haphazardly digging the road is not stopped.
Chair Poudel said that the TAAN Western Regional Association has forwarded activities to search alternative trekking routes at a time when the trekking route have been shortened due to haphazard digging of roads.
He added that TAAN is organizing trekking from Pokhara to Kholasothar via Yanjakot, Tangting, Naichu, Karapudanda, and Dharmashala as well as Sicklace from Kholasothar via Teuche Lek, Koridanda, Hugukot, and Kaphuche Lake.
According to TAAN, other trekking routes linking from such places would be developed and expanded along with the promotion of trekking routes.
Chairperson of Madi rural municipality, Bed Bahadur Gurung, said that trekking is going to be organized with the objective of establishing new trekking routes and promoting these areas.
He added, "We have believed that the promotional trekking going to be organized at the collaboration of TAAN will have significant contribution in overall tourism of the area."

Man Sets His Own House On Fire, Killing Two Sons

Smart Traffic Light System To Be Introduced In Kathmandu Valley

Most Flights To Tarai Areas Affected Due To Fog

Impact Of Local Wind: Weather To Be Partly To Generally Cloudy