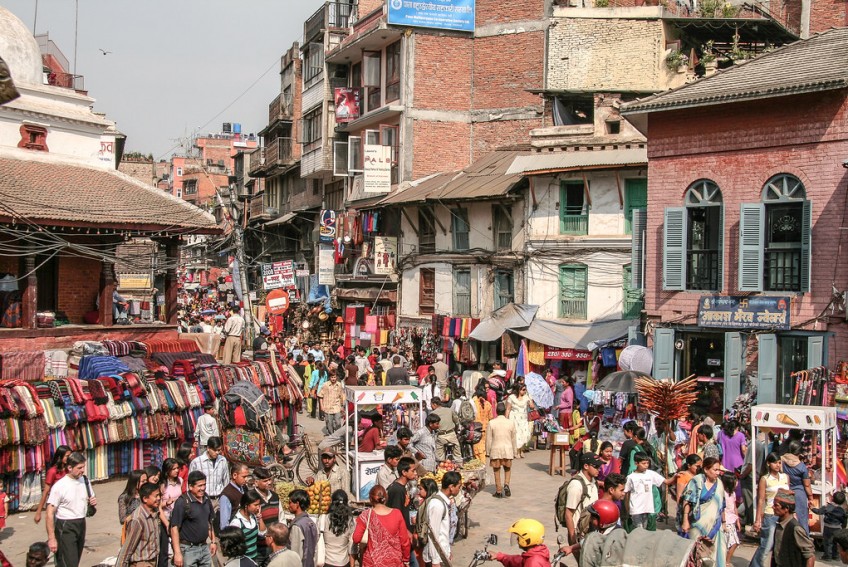 The old India-Tibet trade route is now a great place of ceremonial and market square with busy vibes all around.

The intersection of six streets – Maru, Kathmandu Durbar Square, Makhan, Jana Baha, Asan, and Naxal make the square of Indrachowk, an old India-Tibet trade route. Named after an ancient Vedic deity, Indra (the lord of heaven in Hindu mythology), the place is one of the ceremonials and market squares of the historic location of Kathmandu city.

The crowded alleys with people, vehicles, and rickshaws waiting for customers fill the place with a busy vibe. The chowk has a variety of products sold like pashminas, footwears, puja materials, accessories, blankets, textiles, shawls, scarfs, silver or gold utensils, ornaments, beads, sari materials, and many other items. Many sellers even have them displayed on the walls of the streets or side of the temples. The buyers' and sellers' bargains are somewhat of the originality of the place. Therefore, Indrachowk attracts many shoppers as things are bought there at a low price (if one is good at bargaining, that is). Moreover, the streets are occupied by fruits and vegetable sellers as well. One may find the alleys a bit chaotic at the peak hours of the day.

Indrachowk is not only a market street; it also is a site with historical, cultural, and traditional importance that makes it a ceremonial point as well. The courtyard also attracts pilgrims that come here to worship the historic temples. The major festivals pageants and chariot processions pass through the square. The chariots of Kumari, Ganesh, and Bhairav are pulled here on the auspicious occasion of Indra Jatra. The chariot procession of Jana Baha Dyah Jatra also makes its way through the yard.

One of the main hustles and bustles of the city can be experienced here, which is also something that cannot be missed once you are in Kathmandu city. The maze of the streets offers the local aura that the tourists would love to witness. Besides, the chowk also serves fresh regional products which are not to be missed. While roaming around the alleys, do not miss out to notice the carvings on the windows and doors of the surrounding houses as they keep the historic traditional art alive in the place.

On the West is the Akash Bhairav Temple (the Bhiarab of the Sky), which is locally called Aju Dyah. It is on the first floor of the old building with a line of shops on the ground floor. There is a large mask of God of the Sky – Akash Bhairav ecstatically decorated with silver ornaments. The silver image is displayed in the square during festivals. The temple has four metal lions directly facing the streets while two other lions are placed at the entrance from where only Hindus are allowed to enter.

The eastern side of the square leads to a twisted alley called the Raki Bazar that got its name from the word 'Iqari.' It is believed that merchants from Iraq came to the place in the medieval period and established the Bazar, selling glass beads. One can find the world-famous glass beads there, which are used to make ornaments like "pote" that married Nepali women wear around their neck as an accessory.

In the southwestern corner lies a small Ganesh temple leading its way to Makhan and Durbar Square.

The northern side of the square originally had a pagoda structure that was destroyed in the 1934 great earthquake. It has replaced by a Shiva Temple, a small domed shrine.

To the south is the Shukra Path that goes along to New Road that is lined with identical white-washed stucco houses that were built after the 1934 earthquake. The path gets its name from the martyr Shukra Raj Shastri and is a famous fancy shopping street in the valley.

The most famous attraction of the place for many locals is the famous Lassi. It is a must-try once you reach the square.

All in all, one can take a heritage walk around the courtyard while shopping, eating, and enjoying the busy vibe along the alleys of Indrachowk.