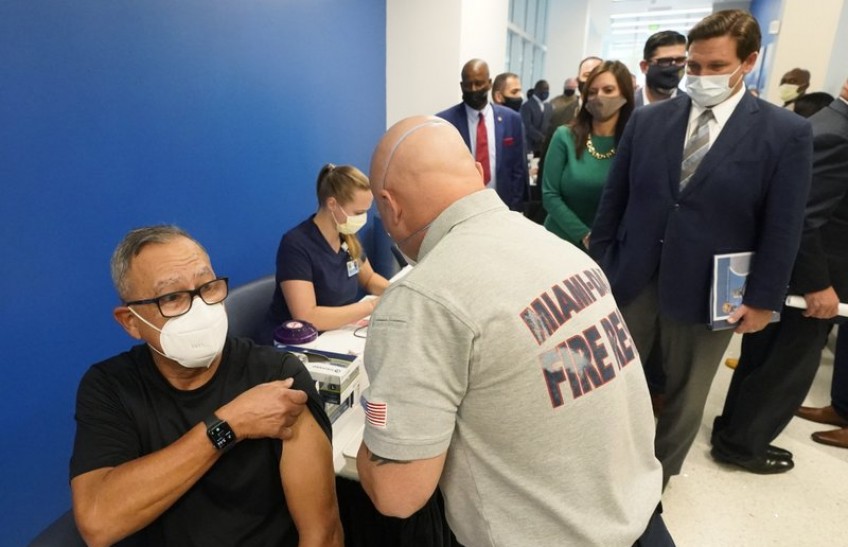 Florida was one of the first states to throw open vaccine eligibility to members of the general public over 65, leading to rumors that tourists and day-trippers are swooping in solely for the jab

Florida was one of the first states to throw open vaccine eligibility to members of the general public over 65, leading to rumors that tourists and day-trippers are swooping in solely for the jab. State officials have moved quickly to disavow such scuttlebutt.
Gov. Ron DeSantis said stories of people flying to Florida, getting vaccinated, and returning home are overblown. While there have been scattered reports of such interlopers, DeSantis said the nonresidents who are getting shots are almost entirely “snowbirds,” residents who live in the state for several months during the winter and who could infect others if they aren’t vaccinated.
“I think it’s totally fine if they wanted to” be vaccinated, the Republican governor said at a recent news conference. “It’s not like they’re just vacationing for two weeks. ... They have relationships with doctors. They get medical care in Florida. ... So that’s a little bit different than somebody that’s just doing tourism.”
But Agriculture Commissioner Nikki Fried, a Democrat who is contemplating a run against DeSantis next year, said her office is getting numerous complaints from Floridians who are angry that nonresidents are getting shots and who allege that some are not 65 or older. That is on top of complaints that vaccination appointments are gobbled up as soon as they are posted while phone and online registration systems keep crashing.
“This is a major issue,” Fried said. “We are seeing lines all across the state of Florida. ... I’ve talked to seniors who’ve waited hours upon hours.”
DeSantis’ executive order governing vaccine distribution currently limits shots to people 65 and older, nursing home patients, and front-line medical workers. The order makes no mention of residency, but health officials say anyone getting vaccinated must attest they will remain in the state for at least three additional weeks to get their second required shot. In addition, the state health department has said any doctor or hospital that inoculates younger patients who aren’t eligible could lose access to the vaccine.
Vaccine eligibility varies widely by state. The federal Centers for Disease Control and Prevention said this week that states should follow Florida’s model and concentrate vaccination efforts on those 65 and older, but governors and health officials have crafted their own rules. As a result, senior citizens, teachers, police, firefighters, grocery store workers, and prison inmates all hold different places inline depending on where they live.
About 4 percent of the 650,000 people who have been inoculated in Florida list an out-of-state residence, health department records released this week show. About 2 percent of both the 1.5 million people who have been diagnosed in Florida with COVID-19 and the nearly 24,000 who have died there of the disease have been nonresidents.
DeSantis said Tuesday that there have been calls to vaccine registration hotlines from foreigners and residents of other states who want to travel to Florida only long enough to get the shots, but they are turned away.
Some short-time visitors do get vaccinated, although it is impossible to say how many. The Washington Post and New York Post reported last week that two wealthy New Jersey developers, brothers David and Bill Mack, used their connections with a nursing home to get themselves and members of their Palm Beach country club vaccinated without having to go through a hotline or website.