US government sends over 15 lakhs Covid-19 vaccines to Nepal 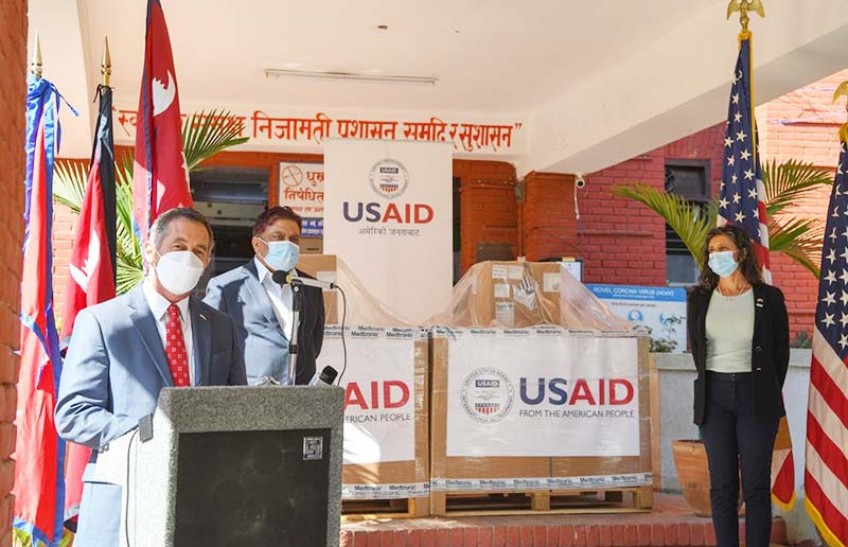 Over 1.5 million single-dose Johnson and Johnson vaccines were airlifted to Kathmandu from the US by a chartered flight today morning through COVAX

The government of USA has handed over 1 million 534 thousand 850 doses of COVID-19 vaccines to Nepal through COVAX. The American ambassador to Nepal, Randy Berry handed over the crucial in-kind support to Prime Minister KP Sharma Oli amid a brief ceremony held at the official residence of Prime Minister at Baluwatar, Kathmandu, today.

The single-dose Johnson and Johnson vaccines were airlifted to Kathmandu by a chartered flight today morning, according to the Ministry of Foreign Affairs. According to a press statement issued by the Ministry here today, Prime Minister Oli extended his sincere gratitude to the government of the USA and its people for their “generous” support.

American envoy Berry said that the vaccine support was “a gift” from the American people to the “friendly” Nepalese. He shared that it had reflected the longstanding friendship between the USA and Nepal.

Meanwhile, the vaccines that arrived in Nepal today were received by the American ambassador and the staffers at the American embassy in Nepal. The vaccines were handed over to the Minister of Health and Population, Krishna Gopal Shrestha at the Tribhuvan International Airport (TIA).

Minister Shrestha said that the vaccine support would be a “boon” to save Nepalese from the COVID-19 virus. The single-dose vaccines would be administered to people between 50 to 54 years on a priority basis, the Minister shared.

He extended his gratitude on the behalf of the government of Nepal and Nepalese citizens for the US government's support in COVID-19 response efforts. “Vaccination against COVID-19 is the best alternative. The government is preparing to ensure vaccine coverage to 72 percent of Nepal’s population.”

During the press meet at the TIA, Ambassador Berry said that the singular goal of the vaccine support was to help Nepal save as many Nepalese lives as it can.

Pledging further cooperation from the American government in Nepal’s fight against COVID-19, he shared that the US government had provided grant assistance worth USD 2 billion to COVAX which will make sure that the low-income countries and medium-income countries will get a supply of vaccines against the COVID-19. He also said that the American government had already provided over USD 70 million to Nepal in its COVID-19 response as of now.