A Gathering of Culinary Enthusiasts 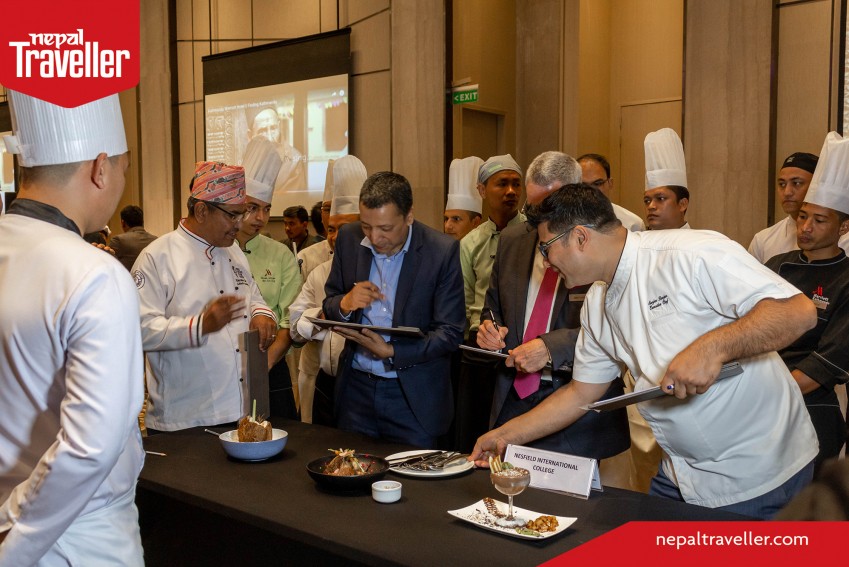 The event kicked off at 11:30 am with representative teams participating from 9 hospitality management and culinary art academies. Surrounded by fierce young chefs, you could sense their determination in winning this whole thing with the way they concentrated on pouring their heart out in making their dishes. Each dish had their own stories like the mixing of modern and local foods to create a new contemporary dish.

Comprising of an appetizer, main dish and a dessert, the competition ended at 2:00 pm. A wide array of dishes were presented with foods satisfying every palate. The judges for the contest were Nepal’s first Executive Chef, Govinda Narsingh K.C, Nepal Tourism Board’s Marketing and Promotion Manager cum Director, Sunil Sharma along with in-house jury, General Manager of Kathmandu Marriott Hotel, Jean-Louis Ripoche, Executive Chef of Kathmandu Marriott Hotel, Sanjeev Ranjan and the M.C, Bhupesh Shrestha. The parameters of the judging were the presentation of the food, the story behind it, the dish selection and the taste. The judgings were done privately and after vigorous rounds of questioning on the judges’ part, three winners were announced. The Academy of Culinary Arts and Hospitality Management bagged the first prize while Global Academy of Tourism and Hospitality and Silver Mountain School of Hotel Management brought home the runner-up and second runner-up positions respectively. The winners were accordingly awarded with Rs.20,000, Rs.10,000 and Rs.6,000. The team which came first was also awarded with a two month vocational training voucher in any culinary section that they’d like in Kathmandu Marriott Hotel.

“The enthusiasm and zeal displayed by the participants were palpable. Although this is a competition, you all were winners in my eyes. As the saying ‘every cloud has a silver lining’, nobody goes out of here empty handed. Everybody gains something. These experiences which are like stepping stones are going to shape you into much better, polished chefs.”, said Sanjeev Ranjan.