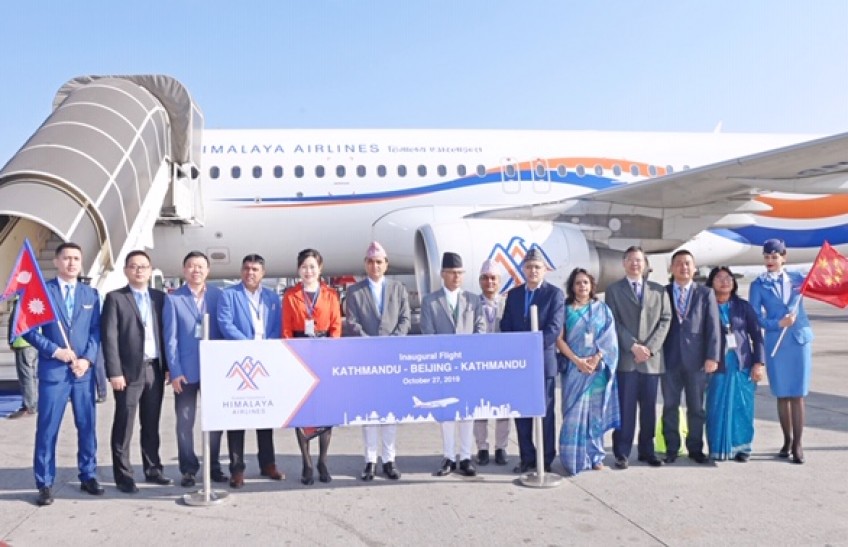 Himalaya Airlines, a Nepal-China joint venture airline operating internationally, gears up to meet the demand for inbound and outbound travellers from China this winter, by introducing their newest flight route which is scheduled for thrice a week from Kathmandu to Beijing, the capital city of People’s Republic of China.

The new flight is the latest move in Himalaya Airlines’ business strategy of network expansion to boost Nepal’s connection to China, which is an important trade partner for Nepal besides being the second largest market for tourist arrivals to Nepal. This route is expected to ship 40,000 Chinese passengers in a year. In recent years, the demand for seats has grown exponentially amongst both business and leisure passengers, not only increasing tourism traffic and revenue but also promoting vital trade agreements between the two countries.

Mr. Yogesh Bhattarai, the Honourable Minister of Culture, Tourism and Civil Aviation, Her Excellency Ms. Hou Yanqi, the Ambassador of People’s Republic of China to Nepal and Mr. Kedar Bahadur Adhikari, Secretary – MOCTCA along with the high ranking officials from CAAN and TIA were present for the pre departure inaugural cake cutting ceremony organized at the Radisson Airport Restaurant.

“I feel overwhelmingly excited and proud that we are embracing Himalaya Airlines.”, said Mr. Zhou Enyong, the President of Himalaya Airlines when welcoming the invitees. Honourable Minister Mr. Yogesh Bhattarai also congratulated Himalaya Airlines for this important connectivity with China which will contribute to the targeted tourist arrivals of 500,000 Chinese travellers for VNY 2020.

The airline operates a fleet of three A320 with its scheduled service to Doha Abu Dhabi, Dammam and Dhaka. In addition, the airline has already announced its plan to increase its fleet with induction of two A319 aircraft by the end of 2019/beginning of 2020. With this service, Himalaya Airlines will be the only Nepali airline to operate direct flights between both the countries.