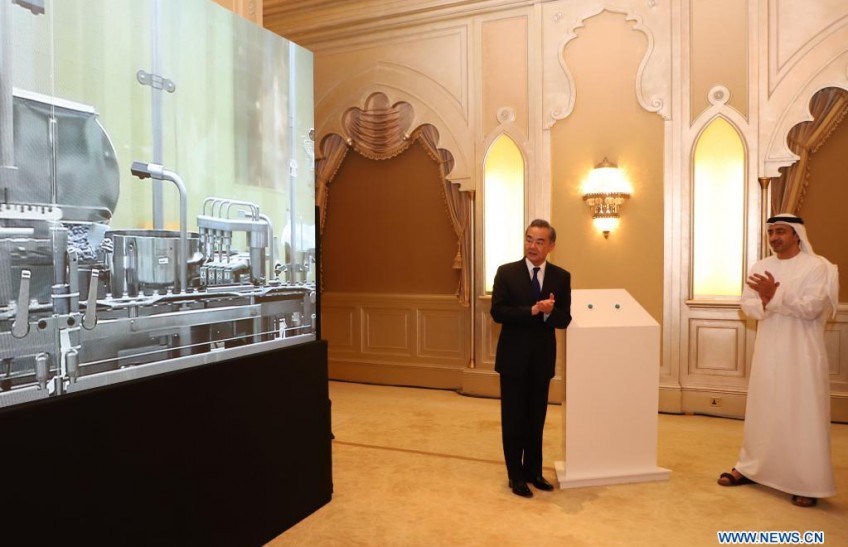 Chinese State Councilor and Foreign Minister Wang Yi met with Foreign Minister of the United Arab Emirates (UAE) Sheikh Abdullah bin Zayed al-Nahyan on Sunday in the UAE capital Abu Dhabi. The two top diplomats attended the virtual ceremony of the launching of a joint project between China and the UAE on Chinese vaccines filling the production line. Wang said that as China and the UAE jointly conducted the world's first international Phase III clinical trial of inactivated vaccines against COVID-19, it sets a record for a multi-national, large-scale clinical trial and promotes international recognition of the Chinese vaccines, which also makes important contributions to the global fight against the epidemic.

The project marks a new stage of cooperation between China and the UAE in fighting the COVID-19 pandemic, he said.

Wang said that he was looking forward to the smooth and effective development of the project, and it was hoped that with the UAE as a platform, the Chinese vaccines could benefit people from more countries and regions, and make new contributions to building a global community of health for all. For his part, Sheikh Abdullah said the international Phase III clinical trial reflects the high mutual trust between the two countries, which was also fully recognized by the international community.

So far, more than 50,000 volunteers of over 120 nationalities have participated in the experiment and the result proved that the Chinese vaccine was safe and effective, and was being approved by the international community, he noted.