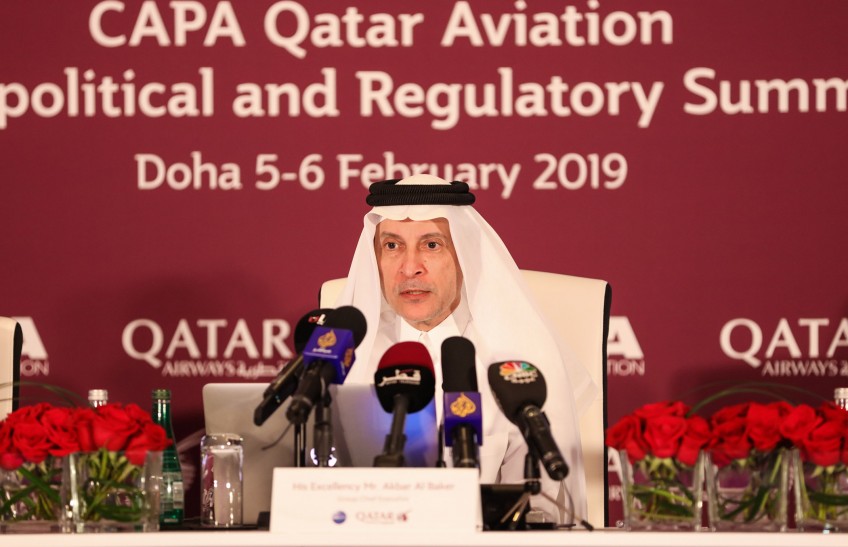 The first day of the CAPA Qatar Aviation, Aeropolitical and Regulatory Summit kicked off on February 5 at the Sheraton Hotel in Doha, Qatar. The summit, held under the patronage of Qatar’s Minister of Transport and Communication, His Excellency, Jassim bin Saif Al Sulaiti, and in the presence of the President of Qatar’s Civil Aviation Authority, His Excellency Abdulla bin Nasser Turki Al-Subaey, was attended by ambassadors, officials, and senior executives from the aviation industry, and is the first aeropolitical event of its kind to be held in the Middle East.

The Group Chief Executive of Qatar Airways, H.E., Akbar Al Baker, delivered an inspiring keynote address on the first day of the conference in front of international delegates and decision-makers from across the aviation industry.

He stated, “Qatar Airways has demonstrated tremendous resilience in the face of the blockade, and our resilience as an airline is reflective of that of the State of Qatar as a whole. Rather than falling to our knees, we have transformed the blockade into an opportunity to innovate and diversify. One of our key objectives is to ensure a regulatory environment that encourages investment and welcomes new entrants into the market. We strongly believe in the vital role that liberalised aviation plays in connecting people and fostering economic prosperity."

“While my country may be small in size, we are big in ambition. This is why we have set ourselves the goal of becoming the first country in the Gulf region to achieve a Comprehensive Air Transport Agreement with the European Union. We expect that this agreement will demonstrate to the world that through positive engagement, we can build trust among nations, overcoming the fear of competition and embracing the benefits of liberalisation.”

“Liberalisation facilitates open and fair competition, enabling our industry to innovate and prosper despite structural and geopolitical challenges. While receding back to old protectionist approaches may be a normal reaction to the fear of competition, it will only result in compounding the challenges our industry faces.”

CAPA – Centre for Aviation Executive Chairman, Peter Harbison, further reported, “This is an extremely important time in the evolution of aviation regulation. As the world seemingly drifts towards greater conflict in trade internationally, and pressures grow on the airline industry to become more restrictive in terms of market access, it is important to establish a reference point to address future directions.”

“The opportunity provided with this high-level group of experts in Doha is extremely timely, and we look forward to many valuable discussions over the next two days. We are grateful to the Qatari government and to Qatar Airways for this opportunity to bring together such a distinguished group of experts.”

The CAPA Qatar Aviation, Aeropolitical and Regulatory Summit, taking place from 5-6 February, features more than 30 expert speakers from across the airline, legal and government sectors discussing the latest developments in international aviation regulation, both within the Gulf region and globally.

CAPA is one of the world’s most trusted sources of market intelligence for the aviation and travel industry, with a global network of researchers and analysts located across Europe, North America, Asia and Australia.

Established in 1990, CAPA hosts a series of global summit events in key markets throughout the year, offering valuable networking opportunities and in-depth insight on the issues and trends that are shaping the global airline industry.