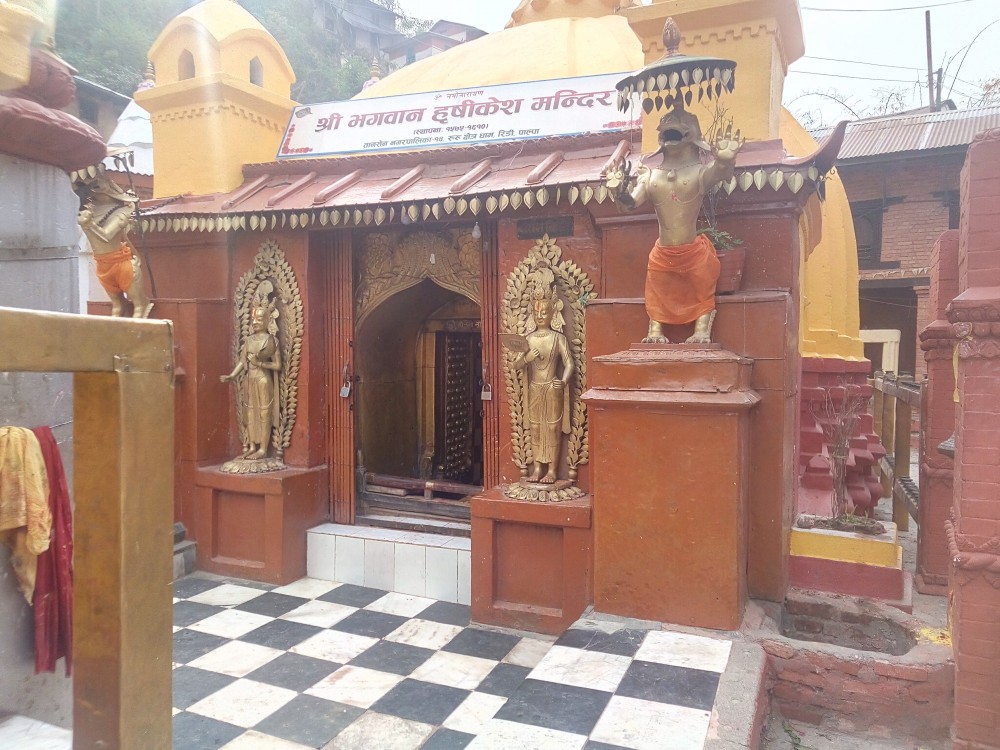 The Rishikesh Complex of Ruru Kshetra is located in the district of Palpa in Nepal. The combination of numerous styles of architecture and religious importance of Hindus makes it an important place to visit.

The actual holy ground is situated at the confluence of the mountain stream called Ridi Khola and the Kali Gandaki River. It is the place where the mighty Kali Gandaki changes its direction to flow eastwards from the earlier north-west. It is called the Banaras of Nepal and also on the tentative list of UNESCO World Heritage Sites.

Rishikesh is the most popular temple among the many temples here. It is believed that the King of Palpa discovered the deity Rishikesh in the Kali Gandaki River during a holy dip.

The complex of the temple resembles medieval period style and architecture. The site is well preserved and is still in use as a sacred Hindu site where important activities like fair, festivals, worship, verdict rituals are performed.

The village and areas around the holy site still retain their medieval character and architecture which supports close linkage to the archeological facts of the complex. The living heritage of Rishikesh, Ruru Kshetra is well preserved maintaining its historical significance over centuries.

The place has a beautiful story about the sanctity of Ridi and the origin of the deity. It is believed that a brahmin named Devdutta meditated in this place to repent for a sinful act. Legend says Pramalocha who the Brahmin married was one of the angels sent by Lord Indra to bewitch the sage and destroy his meditation with her beauty.

They had a daughter who they abandoned and she was brought up by kin of a deer called Ruru. Ruru also meditated for a long time and was blessed by Lord Vishnu. It is believed that Vishnu manifested into a huge shaligram shila and named the place after Ruru as the blessing.Rishikesh means the controller of the senses and is a form of Vishnu.

Bhrigutungeshwar Cave, Saugadha Bihar, Galful Caves are among the major attraction here. Maghe Sankranti and Ridi annual festivals are the major festivals. Thousands of devotees from all around the world gather here on this day.