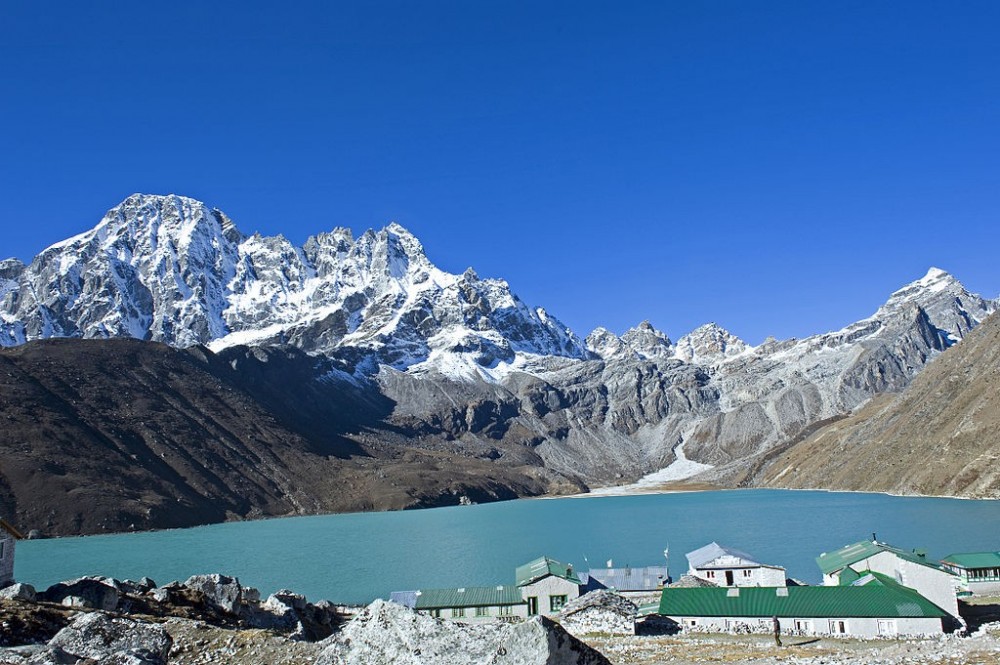 Glacial lakes are defined as the mass of water existing in a sufficient amount and extending around a free surface of a glacier. They basically originate from the glacier activities. Nepal being a mountainous country is home for many glacial lakes. It is believed that there are about 2323 glacial lakes in Nepal, according to the study done by ICIMOD. These lakes originate from 4 main basin i.e. The Koshi River Basin which has 1,062 lakes, the Gandaki River Basin, 338 lakes, the Karnali River Basin 907 lakes, and the Mahakali River Basin contains 16 lakes. The biodiversity tends to be lower in glacial lakes as the temperature is really low and only the cold-adapted species could survive the place. However, the journey to reach these remote lakes of Nepal can be adventures and the beauty of the isolated place is also jaw-dropping. Here are some of the famous glacial lakes of Nepal

Tsho Rolpa (also Cho Rolpa) is one of the biggest glacial lakes in Nepal. The lake, which is located at an altitude of 4,580 meters (15,030 ft) in the Rolwaling valley, Dolakha district, has grown considerably over the last 50 years due to glacial melting in the Himalayas. The aerial distance from Kathmandu is about 110 km. The lake is located at the foot of the Gauri Shankar Range, south of the Tibet (China) border.

The lake is elongated to the east-west and is located at the foot of Trakarding Glacier in the Rolwaling Valley. The highest peak of the valley is Mount Gaurishankar at 7146m. Trakarding Glacier, the main stem of the glacier system in the area has actively started to melt down during past decades and this might have resulted in the formation of Tsho Rolpa Glacial Lake. Tsho Rolpa Glacial Lake gradually developed by damming the unconsolidated moraine and with some dead ice left by the glacier while it retreated. The end moraine is about 150m from the dam crest to the toe at the Rolwaling Khola. The base width at the dam is estimated to be at least half a kilometers.

The lake threatens to burst through its unstable dam, which would threaten the lives and livestock of over 6000 villagers living around the TamaKoshi River. In 2012, the UNDP reported that an early warning system installed by the authorities in the late 1990s, which became defunct through lack of maintenance, will be replaced by a more modern warning system for glacial floods from the lake. Trekking up to the lake is very challenging and can take about 4-6  days depending upon the time crunch. However, the view of the lake will make the explorers forget about all the pain and suffering.

Imja Tsho (or Imja Lake) is a glacial lake created after meltwater began collecting at the foot of the Imja Glacier on the lower part of the glacier in the 1950s. A 2009 study described this lake of meltwater as one of the fastest-growing in the Himalaya. Held in place by a terminal moraine, Imja Tsho threatens downstream communities with the potential for a glacial outburst flood.

Imja Tsho has been identified as one of the potentially dangerous lakes in Himalaya. It is located at 27° 53' 55" N latitude, 86° 55' 20" E longitude and at an altitude of 5010 m in the Everest region of Nepal. The catchment of Imja Tsho occupies the northeastern part of the Dudh Koshi sub-basin. The lake itself is located on the lower part of the glacier at the toe of its mother glaciers (snout of Imja and Lhotse Shar Glaciers). The Lhotse Shar Glacier flows in a south-westerly direction. The Imja Glacier, on the other hand, is oriented in a north-westerly direction and has its terminus at about 5100 m. These two glaciers coalesce approximately 3.5 km above the terminus and flow westwards just beneath the trekking path of Imja Tsho.

The lake was first mapped in the form of a few ponds from the satellite image taken in 1962. The total area of the ponds was approximately 0.03 square km. With the melting of glaciers, the ponds merged into a super-glacial lake in the 1970s and it has grown continuously ever since. The lake area increased to approximately 0.8 square km (796600 sq m) in 2000 with an average growth rate of 0.02 square km per year. On the basis of the newly released image of 21 November 2009 on Google Earth, the Imja Tsho has attained an area of 1.055 square km as a result of which the growth rate of the lake has increased to 0.025 square km per year from 2000 to 2009. The preliminary analysis has also shown that there has been an increase of almost 11% in the lake area compared to the area calculated on the basis of satellite image received in October 2008.

Gokyo Lakes are oligotrophic lakes in Nepal's Sagarmatha National Park, located at an altitude of 4,700–5,000 m (15,400–16,400 ft) above sea level. These lakes are the world's highest freshwater lake system comprising six main lakes, of which Thonak Lake is the largest. In September 2007, Gokyo and associated wetlands of 7,770 ha (30.0 sq mi) were designated a Ramsar site.

Gokyo lakes are located in Khumjung VDC of Solukhumbu District in Sagarmatha Zone in north-eastern Nepal. Gokyo Cho, also called Dudh Pokhari, is the main lake with an area of 42.9 ha (106 acres), and the village of Gokyo lies on its eastern shore. Thonak Cho is the largest lake with an area of 65.07 ha (160.8 acres). Gyazumpa Cho is 29 ha (72 acres) in size, followed by Tanjung Cho with an area of 16.95 ha (41.9 acres), and Ngojumba Cho with an area of 14.39 ha (35.6 acres). As sources of permanent freshwater, they have high hydrological value. They feed on waters from various sources, such as seepage from the Ngozumpa stupa, a stream coming from the Renjo La pass from the north-west and another stream originating from the Ngozumpa glacier in the east. These are glacier-fed freshwater wetlands and discharge water to the Dudh Kosi headway via the Taujon Lake and the Longabanga Lake.

These lakes are deeper than previously assumed by the researchers. Fourth Lake (Thonak Cho) is the deepest lake (62.4m) followed by the Gokyo Lake which is 43 m. A direct connection between the Gokyo Lake and the upper Thonak Cho and the Ngozumpa Cho has not been observed, but these lakes may be connected via underground seepage water. The Gokyo lake system is naturally vulnerable, as it is lying in an ecologically fragile and unstable zone. The outburst of Ngozumpa glacier is always a threat to the existence of the lakes. The Gokyo lake system of 19 lakes is spread over an area of 196.2 ha (485 acres) lying between 4,600 and 5,100 m (15,100 and 16,700 ft). The wetland lies on the head of the Dudh Koshi.

Tilicho Lake is a lake located in the Manang district of Nepal, 55 kilometers from the city of Pokhara. It is situated at an altitude of 4,919 meters in the Annapurna range of the Himalaya and is sometimes called the highest lake for its size in the world, even though there are lakes at higher altitudes. Tilicho lake is fascinating, enchanting, breathtaking, picturesque stuff in the Annapurna region. The glaciers melt from the Tilicho and the Annapurna Range and get collected at the lake. The lake is made from a collection of the glacier around the lake.

There is no aquatic organism that has been recorded in the lake. Due to the high altitude and cold climate, the place is not the best habitat for the animals i.e aquatic animals. Tilicho Lake is the destination of one of the most popular side hikes of the Annapurna circuit trek. The hike takes an additional 3–4 days. There is no need for camping equipment, as new lodges have been built between Manang and the lake. The final approach to the lake is done in a day hike from the lodge at Tilicho Base Camp.

Trekkers attempting the Annapurna Circuit route usually cross the watershed between Manang and Kali Gandaki valleys over the 5416 meters high Thorong La pass. The alternate route, skirting Tilicho Lake from the north, has been gaining popularity. This route is more demanding and requires at least one night of camping. There are no teahouses or lodges past the Tilicho Base Camp lodge some kilometers east of the lake and the next village of Thini Gaon in the Kali Gandaki valley. Most groups spend two nights between these places. There are two passes leading to Thini Gaon and Jomsom; Mesokanto La and Tilicho North pass known also as Tilicho "Tourist pass". These routes via Tilicho Lake are more often closed by snow than the higher Thorong La.

The best time to visit Tilicho lake is in the month of March to May and September to November. In these months, the lake melts you see the giant shadow of the surrounding mountains in the sparkling blue lake. The lake is frozen from December to April. The lake also has religious significance. Hindus believe that lake Tilicho is the sacred lake called KaK Bhusundi Lake mentioned in the epic Ramayana.