Mustang, the dream destination of every tourist

Mustang is an ancient forbidden kingdom and is bordered by the Tibetan plateau in the north and some of the highest peak of the world i.e. Annapurna and Dhaulagiri. This is a high-altitude trans-Himalayan region spread over 3,640 square km in an area barely north of the main Himalayan mountain range. The name "Mustang" is derived from the Tibetan word meaning, "Plain of Aspiration." The elevation of Mustang rises from 1,372 to 8,167 meters. Jomsom is the headquarter of the Mustang district.

Mustang was one of the most remote and isolated areas of Nepal and out of reach to the foreigners. Mustang is divided into two sub-regions, Lower and Upper. While the lower region of Mustang is easily accessible to foreigners but to visit the upper part of Mustang, outsiders would need permits which can cost about 50 dollars per day and guide is compulsory. The upper region-restricted traveller to enter until 1992. This restriction made it possible for the culture in Mustang to thrive and survive without any outside interference. Lower Mustang is much more accessible, although the town of Kagbeni is as far as foreign tourists are allowed to go without an Upper Mustang permit.

The remoteness and isolated location of Mustang have not discouraged travelers from visiting this magnificent place. Almost everyone from the country knows the place and is a dream destination. It is visited by thousands of tourists yearly. They pay a visit to Mustang, to see its beautiful landscape, monasteries, mountains, lakes, to walk on trails leading to jaw-dropping destinations, caves, ever-flowing rivers and gorge, religious places and to witness the traditional Tibetan culture to its core.

Lo Manthang is a major attraction and the best place to see in mustang. Lo Manthang is the capital city of the hidden Tibetan Kingdom situated in Nepal. Lo Manthang features the King’s Palace and many monasteries built in the early 15th century that is being restored by art historians Europe. The village is noted for its tall whitewashed mud-brick walls, gompas and the Royal or King's Palace. There are four major temples: Choprang Gompa also known as ‘New Gompa’; Chodey Gompa, main city gompa; Thunchen Gompa and oldest among all Jampa Gompa.

Foreigners require a special permit to visit Lo Manthang and was closed until 1992. It can also be reached by Lo Manthang trek following the ancient caravan route from Jomsom to Lo. 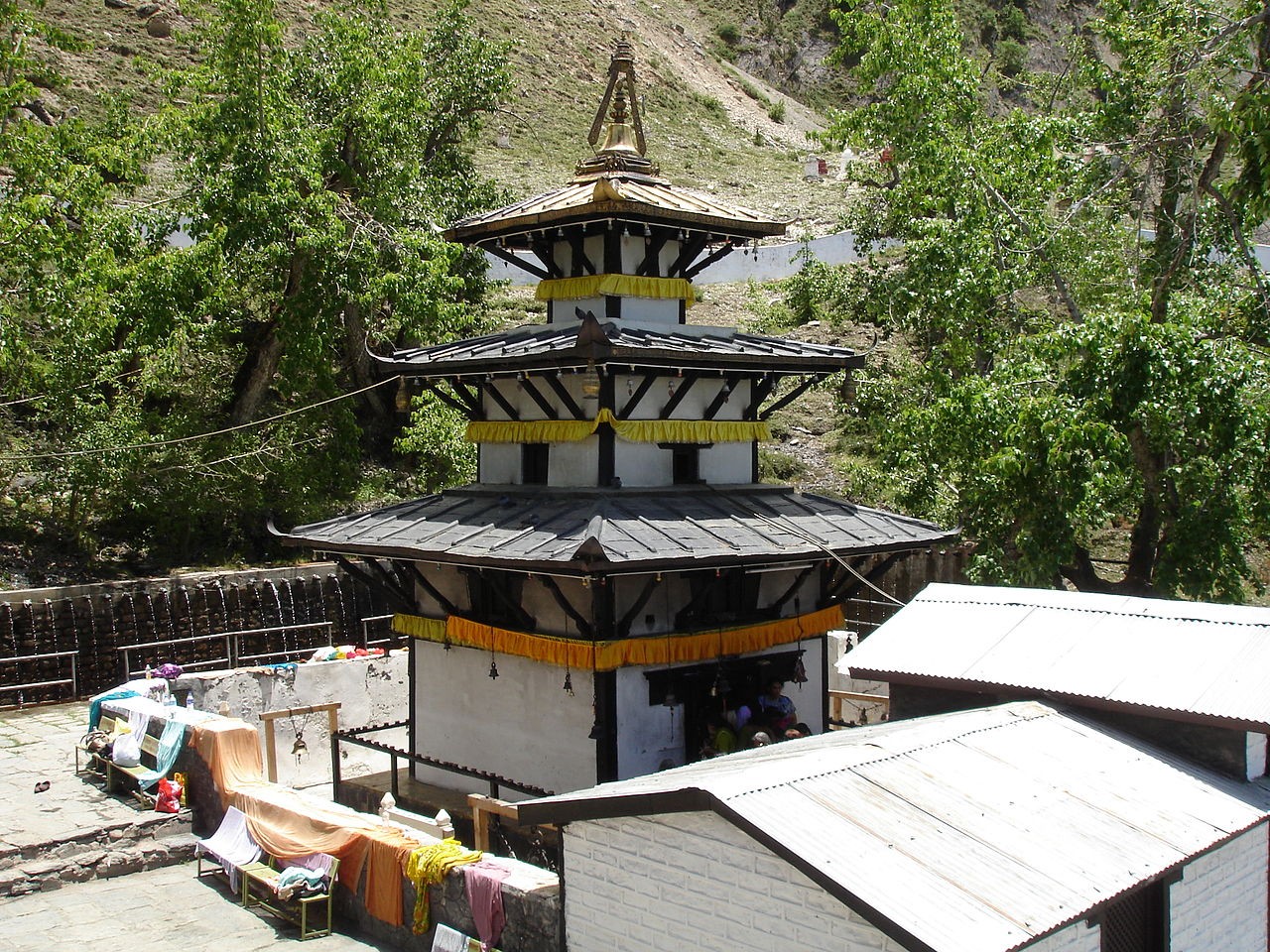 Muktinath temple lies close to the town of Ranipauwa. It is one of the world's highest altitude temples. Muktinath is a temple dedicated to Lord Bishnu and is sacred to both Hindu and Buddhists. It lies at the foot of the Thorong La mountain pass. There 108 stone water spouts from where the water of Kali Gandaki flows and is believed to cleanse one's soul.  Another main attraction is the ever-burning flame.

This temple is considered to be 106th among the available 108 Divya Desam (premium temples) considered sacred by the Sri Vaishnava sect. Buddhists call it Chumig Gyatsa, which in Tibetan means "Hundred Waters". For Tibetan Buddhists, Muktinath is an important place of dakinis, goddesses known as Sky Dancers, and one of the 24 Tantric places.

Dhumba Lake is the new tourist destination while visiting the Mustang region. About 7-8 km from the Jomsom city, it is a hidden gem of the place. Dhumba Lake is an emerald green lake. It lies at an altitude of 2900 m from sea level. This Lake is very famous for being a sacred Buddhist lake. This beautiful lake becomes completely frozen during the winter season. The fish of the place is not eaten due to religious beliefs. Dhumba lake lies at the base of Nilgiri Mountain and is the main source of the lake.

Along with this, a number of caves can be also found in the Mustang region. Jhong cave, sky caves of Chusang village, Chungsi cave near Syangobochen village are some of the famous caves. Recently a series of at least twelve caves were discovered north of Annapurna and near the village, decorated with ancient Buddhist paintings and set in sheer cliffs at 4,300 m elevation. Mustang is also surrounded by small villages like Marpha, Kagbeni, Chhoser, Lubra, Lurpa. Walking through these villages and experiencing the local way is a lifetime encounter that no one should miss while visiting Mustang. Mustang is home for many ancient gumba and monasteries Chhairo Monastery, Red monastery, Ghar Gumba, Luri Gumba are some of the famous monasteries.

Nature has blessed Mustang with the unique beauty that no other place has in Nepal. The quiet and isolated trails which manage to take the trekkers beautiful location with stunning landscapes in every corner are the trails to walk on once in a lifetime. With the close distance view of mountains like Nilgiri, Annapurna, Dhaulagiri and many other mountains, it is a sight to see. 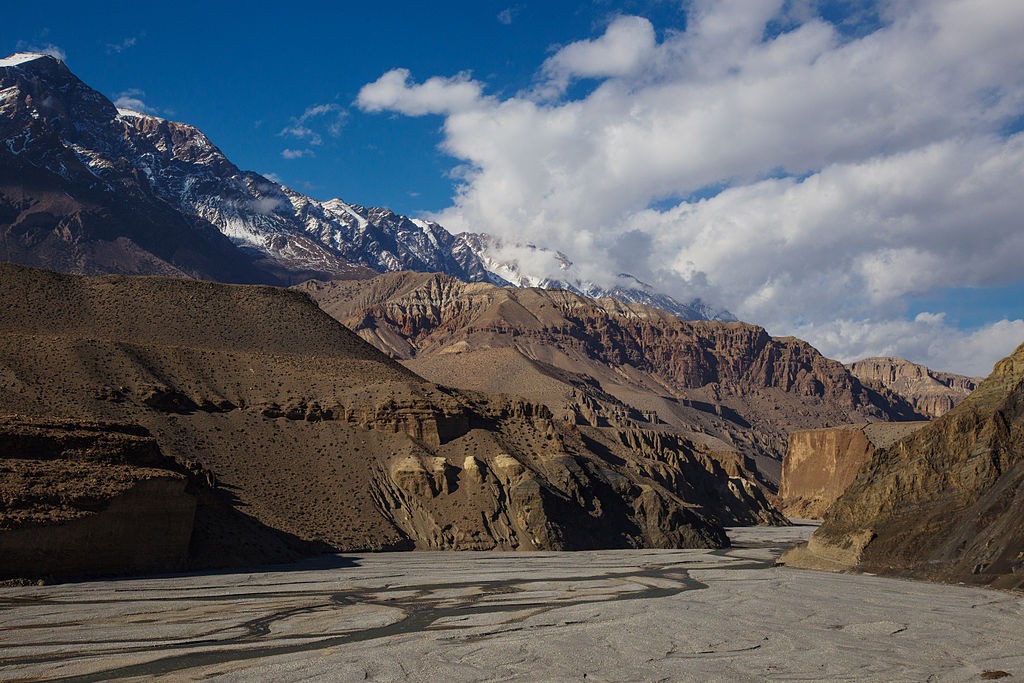 This mountain range gives rise to one of the most important and holy rivers of Nepal, Kali Gandaki.This river is famous for its shaligrams or shilas and is considered aniconic representations of Vishnu. The river gives out the world's deepest gorge. If one measures the depth of a canyon by the difference between the river height and the heights of the highest peaks on either side, the gorge is the world's deepest. Kali Gandaki has become the main source of water for the region's diverse flora and fauna.

Mustang is rich in both temperate and trans-Himalayan biodiversity with flora and fauna that are most common to those that are highly rare. It is home for endangered species of animals like Snow Leopard, Musk Deer, Tibetan Wild Ass and Tibetan gazelle. Out of the 18 butterfly species recorded in Mustang, two are new and three are endemic to the area. A wide variety of insects, birds, mammals, fishes that are native to the place are found in this region. Being at a high altitude, Mustang is rich in medicinal and aromatic plants with very high economic and ethnomedicinal values.

The vegetation of Mustang is characterized by steppe type and has grasslands with scrub. In the lower region, there is a mixed broad-leaved forest that consists of rhododendrons, pines and acer species. Above the elevation of 5,000 meters, there are Rhododendron, Potentilla biflora, and Saxifraga. About 3.24 percent of the Mustang is covered by forest. Above the elevation of 5,800 meters, there is almost no vegetation because of extreme coldness. Near the area of Jomsom, the forest covers the end, and it is very limited in the Upper Mustang region, which falls in the Alpine climatic area.

The Mustang region is situated on the borders of Tibet and presents a unique rain-shadow terrain guarded by the mighty Annapurna and Dhaulagiri Himalayas. It is because of this feature of Mustang that makes trekking in the region during the summer the best option, as other trekking destinations in the country become wet and soggy with summer showers, becomes difficult to trek and the view of the beautiful mountains will be blocked by the clouds which are the main attraction visiting Nepal. However, this doesn't happen in Mustang.

The area receives an average annual rainfall of 260 mm at Jomsom in the Lower Mustang. Spring and autumn are generally dry, but some precipitation is brought by summer monsoons, which averaged 133 mm at Jomsom between 1973 and 2000. The mean minimum monthly air temperature falls to -2.7 °C in winter while the maximum monthly air temperature reaches 23.1 °C in summer.

Mustang borders Tibet, and the culture is mainly influenced by Tibetan. Speaking about religion and culture, Upper Mustang is considered one of the last places on the planet where one can find unsullied Tibetan Buddhism culture still being practiced as it was centuries ago. The upper region of Mustang is inhabited by the Lopa people while the lower or southern part is inhabited by the Thakali people. The main languages spoken are Bhote, Sherpa, and Nepali. The main caste/ ethnic groups are Gurung (45%) and Thakali (17%). 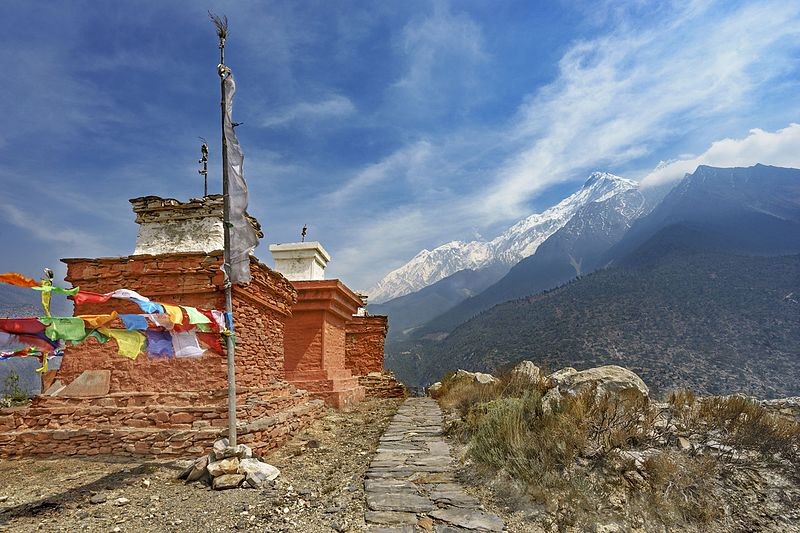 Buddhist monasteries, chortens and stupas, prayer stone walls, monks in red robes, and women in colourful striped Tibetan aprons are common sights. The mud-walled towns are a characteristic feature of the Mustang houses.

Agriculture and animal husbandry are the main occupations. However, with the high influx of tourists and the removal of the tourist ban, many people are engaged in the hotel and hospitality field. They are able to make a livelihood easily, providing a place to stay and food, it has become the main occupation for many of the people of this area.

Jomsom is the gateway to Mustang, reached via a long, bumpy bus ride or a short, very scenic flight from Pokhara. Flights depart early in the morning because of the high winds that whip through the Kali Gandaki Gorge. Flights are frequently cancelled due to the weather. While the flight can be a nail-biting experience, it only lasts a brief 25 minutes, as opposed to the 10+ nail-biting hours on the bus.

Motorbikes can also be another way to reach Mustang. This ride is said to be one of the most difficult and adventurous rides and is in many riders bucket list. Crossing the small waterways to big rivers, unpaved roads, woody bridges and with the view of magical Himalayas range can be a life-changing experience for the riders.