Sarangi, a tale of the tale teller 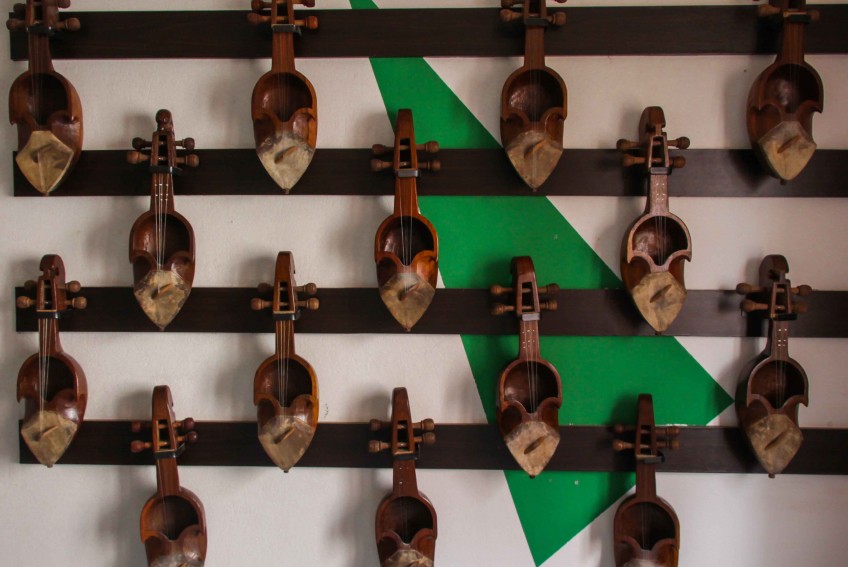 Sarangi – ‘sol rangi’, a hundred colours indicating its ability to adapt to an array of styles of vocal music- is a traditional Nepali string instrument having its origins from the Middle East. A staple folk music instrument in Nepal, Sarangi is extremely popular in India, Pakistan as well as up north in Mongolia. With different styles, formations and genres in each region; today it is clearly distinct from Hindustani Classical and Sufi being most popular.

Originally used as a storytelling and as an announcement medium, the soulful melody of the Sarangi had also found its place at the heart of Nepali music. However, considering the simple Gandharva ethnicity of western Nepal rather paltry in comparison to the legends of the farther west, like Mozart and Beethoven, their profession and heritage have been narrowed down to street players in Thamel, and as souvenirs on showcases. The modern day of the internet has fortunately brought Sarangi to mobile screens of many, even though there still is a plethora of work left before it creates a significant place for itself in the Nepali culture.

The four-stringed instrument is carved out of a single block of either Khira wood or Saaj wood; hence has no joints. It also has no fretboards or finger frets and is rather interestingly controlled by putting fingers in between the strings and shortening the length of vibrations producing soul touching music, which is resonated by three resonating chambers; the pet (stomach), the Chhati (chest) and the magaj (brain). Originally consisting of sheep intestine strings-replaced by metal strings, the instrument produces C,C and G,G notes and is played using a bow originally made of horsehair, almost like the violin.

Traditionally produced organically, and played in homely environments, the Sarangi never caught up with modernisation until very recently. “Without modernising and standardising the instrument its build quality is not justified nor uniform, which could be why it hasn’t been exposed to a larger mass. Hence, it is an absolute necessity to bind the manufacturing of Sarangi with standard measurements”, says Kiran Nepali, founder of Project Sarangi; a foundation that is dedicated to the preservation and promotion of indigenous Nepali folk instruments. The foundation works towards its objectives by also producing standardised Sarangis, and giving lessons for enthusiasts. Nepali, expressing great satisfaction with the steady growth of his project added, “even though it is slow, we are happy with the changes being seen. And as they say, the slow and steady wins the race.”

Sarangi belongs to the Gandharva ethnic group in Nepal and has been a part of their culture for thousands of years. Musicians of the heaven – even mentioned in the Mahabharata – the Gandharvas are said to have been brought down to earth solely to play the Sarangi. However, the Gandharva were the victims of ethnic discrimination for a significant amount of time in the past, to an extent of even having to change their surnames to avoid being looked down upon.  “Our profession was never considered artistic; us playing the Sarangi on the streets of Thamel is considered begging when all we try to do is make a living out of our talent and heritage.”, says 57-year old Mangal Gandharva, who has been playing Sarangi in the streets of Thamel for the past 25 years.

Mistaking westernisation for modernisation, the Nepali society was on the verge of losing a gem from their prestigious heritage; fortunately, however, the much-celebrated Kutumba – a folk instrumental ensemble of six professionals from Kathmandu – played the heroic role in the doomed tale. Escalated by performing in schools in Kathmandu, straight up to the Wembley Stadium in England, Kutumba showed all Nepalis the power of music; and proved that if followed with grave determination, it is possible to attain one's dreams. The band acts as a source of inspiration and with every passing day continues to inspire and motivate Nepalis to incline towards their own rich culture.

The historically rich Sarangi, with numerous stories, from many generations is steadily creeping up the wall to people’s hearts. With a positive impact on social media and the internet, once on the verge of vanishing; the magnificence of the soulful Sarangi, is gradually resonating its way to become an echo. The Nepali society has finally started realising the importance of preserving their culture and has found an inspiration in the dazzling and delightful Kutumba band. With highly respected personalities like Kiran Nepali, and innocent, hardworking street players like Mangal Gandharva giving continuity to their work, the arrow will only point towards positivity and success, soon making the Sarangi the third identity for the Nepali people after Mount Everest and Lord Buddha.