A Festival marking the Affection of Brother and Sister

The purity of the bond between brothers and sisters is celebrated in festivals like Bhai Tika and Rakhi which are widely known. Nonetheless, there is another special festival named Sama Chakeva which marks the affection between the siblings. Like the name itself, its celebration is also distinct from any other festival in Nepal.

Originating from the Mithila region, Sama Chekeva is a Hindu festival celebrated in November. The festival includes folk theater and song, celebrates the love between brothers and sisters, and is based on a legend that dates back to the Puranas.

The festival tells the story of Sama, daughter of Krishna who had been falsely accused of wrongdoing. Her father punished her by turning her into a bird, but the love and sacrifice of her brother Chakeva eventually allowed her to regain human form. The celebration starts from the night of Kharna, the night before Chhath puja.

Young, mostly unmarried girls assemble near the ghaats of Chhath at night with a basket fully decorated with small idols of sama chakeva, candles, kohl, daily use appliances made of clay, etc. The clay is brought from the freshly harvested paddy fields to make the idols. They sing traditional songs, perform some rituals, and exchange their baskets.  This celebration continues till Kartik Purnima. On the auspicious occasion of Kartik Purnima, girls take a dip in the river and the idols of sama and chakeva are immersed in the river. 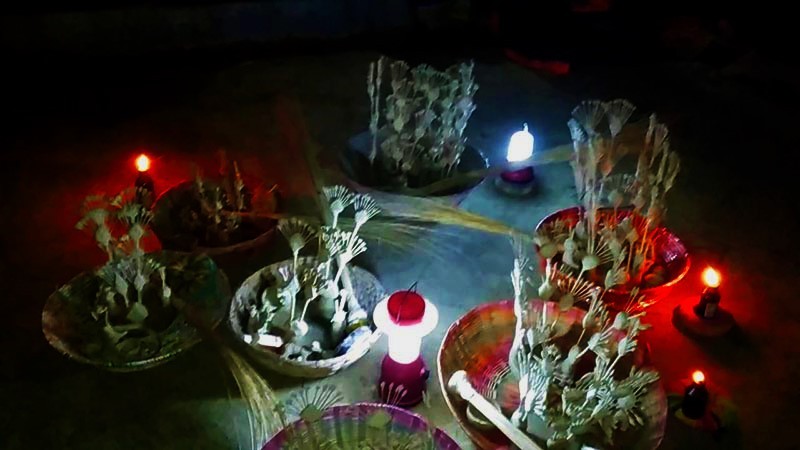 Celebrated in various districts across Terai including Mahottari, Sarlahi, Siraha, Dhanusha, Saptari, and Parsa, this tradition is as strong as Rakhi and Bhai Tika which too celebrates the kinship between brother-sister.

The celebration also marks the arrival of colorful birds to roost on the plains during winter from the Himalayas.