The melting pot of scenery and culture, Tengboche Monastery offers a physical and the spiritual journey that everyone must experience for oneself

Resting at the side of hills, inside the Sagarmatha National Park , this heritage within a heritage has stood for a century, renowned for its panoramic view on the mountains and the luscious scenery of the rhododendrons. Ever since the historic 1953 expedition of Tenzing Norgay and Edmund Hillary put a spotlight on the small Sherpa community living near the monument,  it has been a gateway and transit point for mountaineers to rest and gawk at the picturesque landscape and taking blessings for their arduous and daunting trek to scale the highest peak known to man. It is the Tengboche Monastery.  While the monastery is more recent than its contemporaries with the construction being completed only a century ago, it stands as a testament for centuries of Buddhism flourishing in the region and Nepal, as traditions and rituals from ad infinitum have been preserved and practiced throughout the ages to this day. 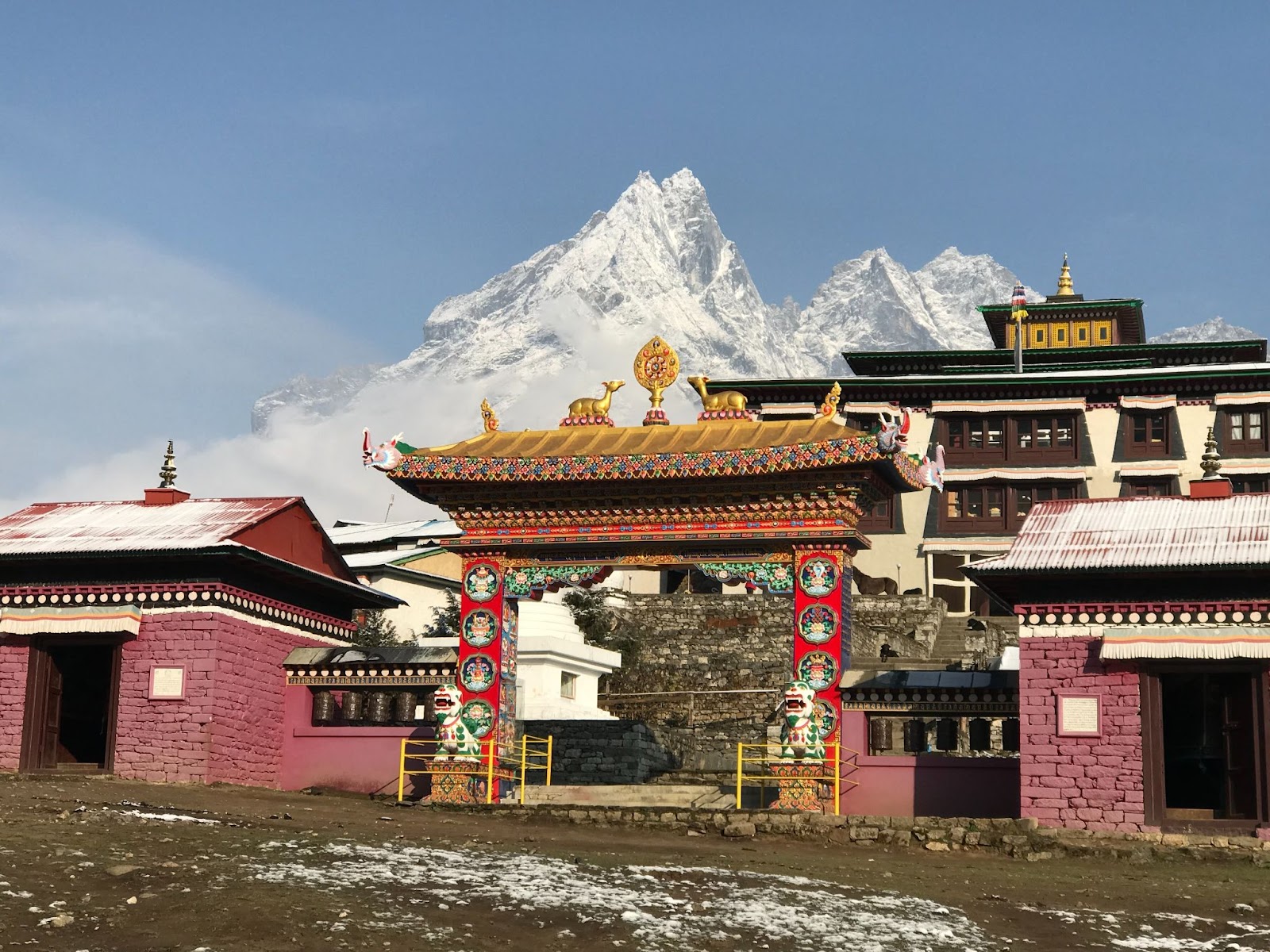 The story of this monument starts 350 years ago, when the Khumbu region came under the influence of Buddhism with many ancient and sacred scriptures and texts referring to this valley as a sacred site for their spirituality. Lama Sangwa Dorje is referred to as the first person to construct and make the oldest monastery in the region in Pangboche and surrounding areas. With his divine knowledge, intuition and an uncanny sense of clairvoyance he forecast a prophecy in which a monastery would be built at Tengboche.

This foretelling came to pass, albeit centuries later, when Ngwang Tenzin Norbu, believed to be the fifth incarnation of Sangwa Dorje established the monastery in 1916. He had already established Rongbuk Monastery in the Tibetan side of the Himalayas and with the funding and patronage of the wealthy Sherpas and the Rana kings along with the support of Khumbu and Sherung Sherpas, he was able to establish the great pilgrimage.

The monastery is the first celibate monastery under the lineage of Nyingmapa which practices Vajrayana Buddhism. The monastery is inundated with Buddhist architecture and culture, made from mostly stone masonry.  The large and spacious courtyards and store rooms were tailor made for the monk's religious rites and activities. The main building has the prayer hall, Dokhang with a large statue of Shakymuni Buddhia said to guide the monks towards enlightenment.  The statue extends to two floors of the monastery and encompasses the Ser sang lha khang, the deity of wisdom and Maitreya and of the future Buddha. The scriptures of the Kangyur,  the original teachings of the Buddha translated into Tibetan are part of the sanctum. 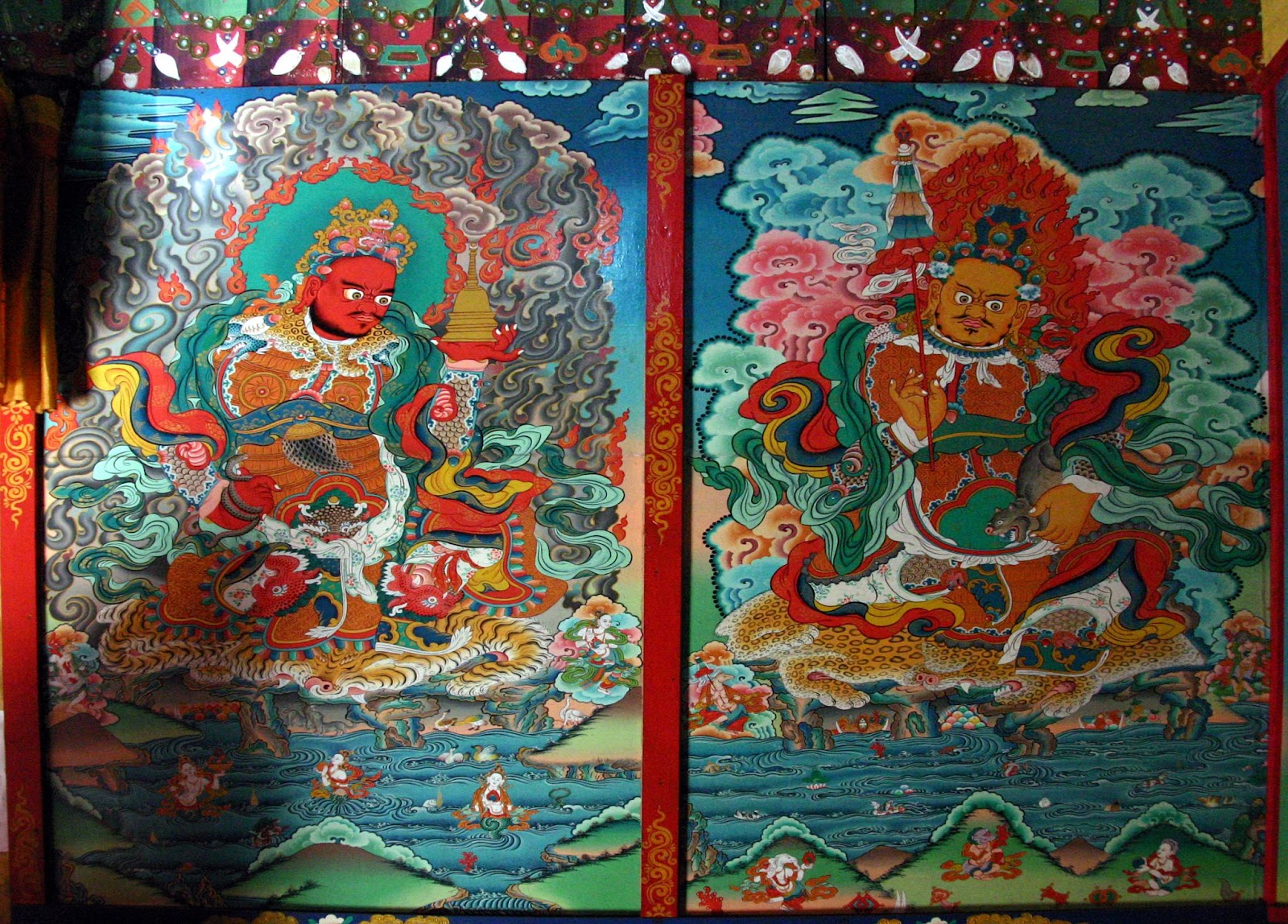 The monastery is filled to the brim with paintings, murals, sculptures, scriptures and many more forms of symbols denoting the feel of sacred and spiritual all around the monastery.  The monastery is surrounded with mani stones; flat stones inscribed with 'Om Mane Padme Hum' prayer,  the elements flags of Buddhism soaring high among the peaks denoting the elements of earth, wind, fire, water, and consciousness in Buddhism. The paintings have been dated back to the 14th century with precious mandalas and other works of art having significant relevance and importance to the inhabitants of the regions. 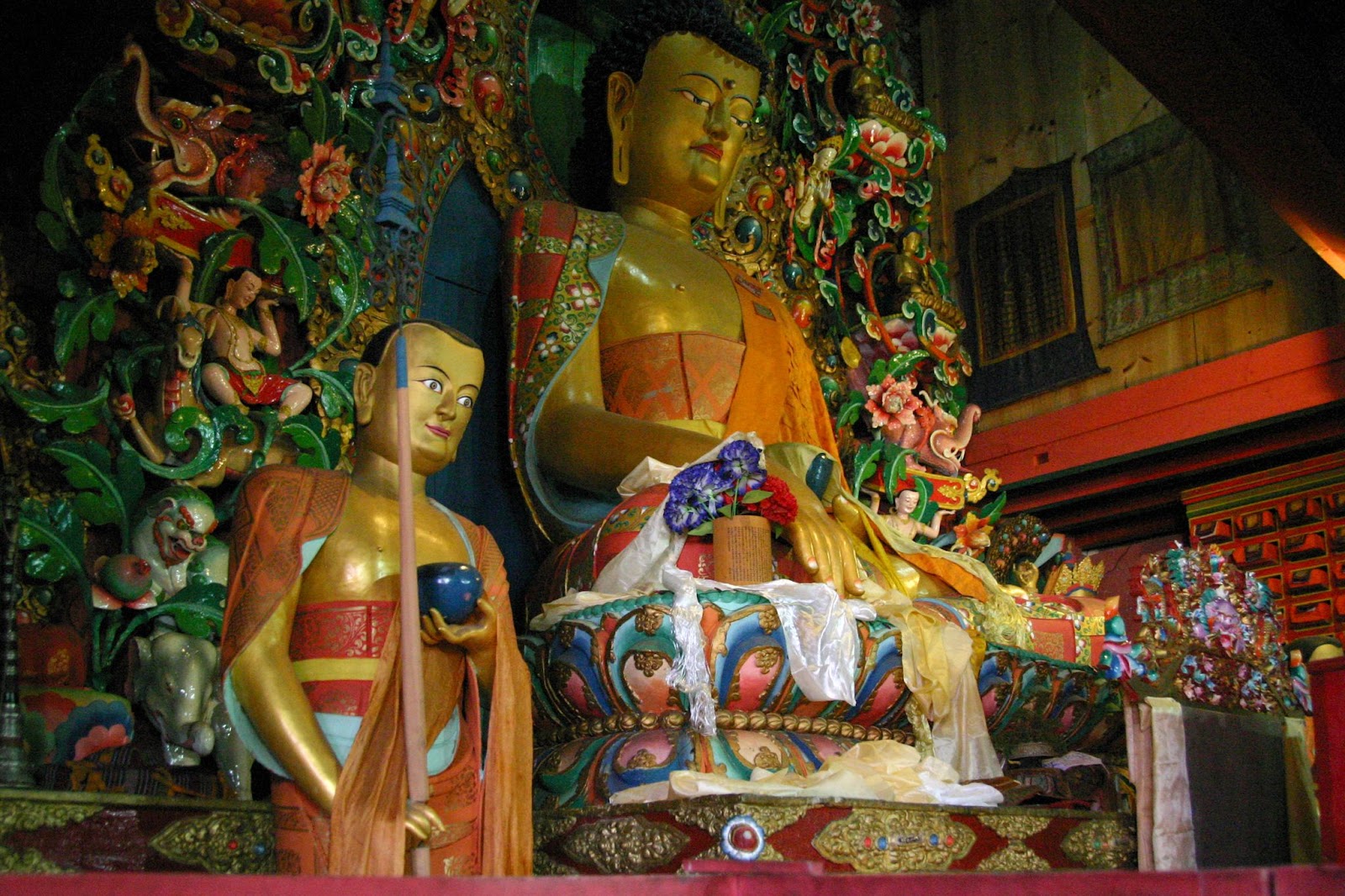 While Tengboche Monastery is a living landmark of ancient Buddhist practices and rituals alive and flourishing in this community, throughout the years it also has gone through many changes. Amidst the damage and destruction caused by the 1934 Earthquake and a fire in 1989,  it has been reconstructed many times, with international assistance. The current state of the monastery has been rebuilt to utmost adherence to their Buddhist roots. In addition, with many nuns living in the Tengboche Monastery demanding an exclusive place of their own, the Lama Gulu, the head of the monastery made a small nunnery building in 1923, a short walk from the main monastery.

In the Vajrayana sect of Buddhism, Mani Rimdu is the most important festival for the Sherpa people living near the monastery. Celebrated in the tenth lunar month of the Tibetan calendar, preparations are made for the festival. Mani Rimdu consists of many ceremonies and Drupchen meditation.  'Mani' means 'part of a chant' while Rimdu means 'small red pills'. Therefore, on the occasion  of the festival, small red pills are made and blessed with a chant of Chenrezig and then is distributed to everyone that attends the festival. For 10 days, the monks begin with the construction of an elaborate mandala diagram using the specific type of sand from the hills. Meanwhile, the program includes 16 types of dance numbers for celebration. Once the mandala is completed and the devotees have left,  then a fire site is done with the mandala to dispel any evil for sentient beings. Then at the end, the resident blesses the general public after which the 'Mask Dances' are performed by the monks. The monks perform the masked dance to usher some of the protective deities as manifestation of the legendary saint Guru Rinpoche, the founder of Tibetan Buddhism; the dance numbers also display the defeat of demons and the initiation of Buddhism to Tibet. 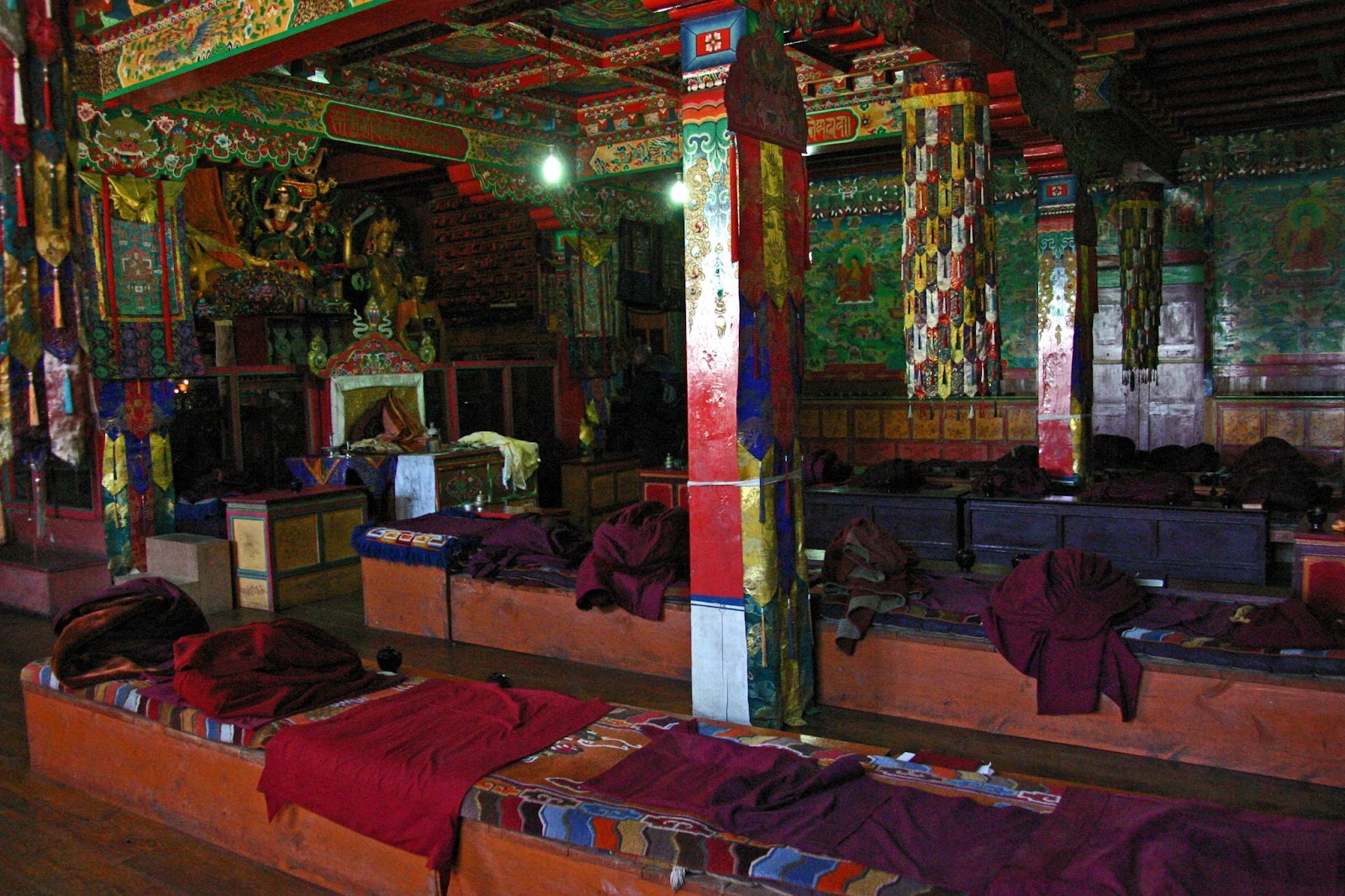 The Tengboche Monastery sits at the edge of both the physical and spiritual. Standing between the hills, privy to the peaks of the world, the panoramic scenery of the Himalayan range makes Tengboche Monastery, just a short walk away from the highest point in the sky. Meanwhile, the Buddhist practice of meditation and other rituals is done for the raising of one’s own self to a higher level and eventually attain enlightenment. And with the Buddhist aesthetic being ever present in the environment and the architecture, in the natural and in the man-made, makes it a place for having a higher sense of self. It is the melting pot of scenery and culture, the physical and the spiritual that everyone must experience for oneself.

Chitlang: A Refreshing Getaway From Your Daily Routine