After shining in battlefields for centuries and used for various purposes in households, the Khukuri, a bequest from our ancestors and pride of our nation, lately shines as decorative pieces 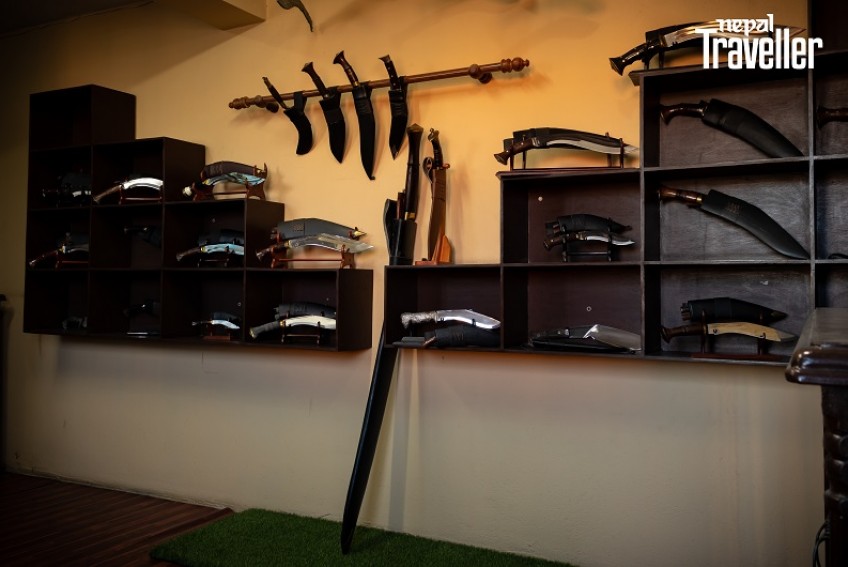 The Khukuri is a national symbol, whose origins are traced and its variety explored. Apart from its significance in our history, it holds a special place in our society as well.

The Khukuri is a type of machete, a recurved traditional knife that evolved in Nepal. These blades are powerful and durable, which is why they are still widely used in rural Nepalese households. They hold symbolic values as well as practical purposes. They are mostly used as a tool for chopping wood, clearing bushes, cooking, slaughtering, and processing meat. Some households even keep Khukuris for security reasons.

The Khukuri was made known to the West during the Gorkha War (1814-1816) with the East India Company, but its exact origins are unknown. Nevertheless, there are many theories. Amongst them, one of the most convincing and compelling is the Kopis version. The shape and style of the Kopis knives are strikingly similar to those of the Khukuri, leading some to believe that it is the direct ancestor of the Khukuri we know today. Some people also believe that the “Machira or Machaira”, an ancient Macedonian cavalry sword used by Alexander’s troops to invade northwest India in the fourth century BC, is very similar to the Khukuri. Later, these swords were improvised by the local blacksmiths to meet the regional demands. The Machira may have been molded on practical and religious grounds by different makers. Some of these swords later turned out to become Khukuris.

Similarly, some claim that the Khukuri was first used by the Kiratis, who ruled Nepal before the Lichchhavi era in the 7th century. The modern Khukuri’s shape may have been descended from the ancient Kirati knives. Likewise, some also believe that the Khukuri originated from a type of knife first used by the Mallas, who came to power in Nepal in the 13th century. There are still many Khukuris displayed in Kathmandu National Museum at Chhauni, proving this claim. The knives carried by the Mallas are very similar to modern Khukuris. The weapon rose to prominence during the Gorkha War, and maintained its legacy during both World Wars I and II, enhancing its reputation among both Allied troops and the enemy forces. And one of the oldest known Khukuris is the Khurkuri of Gorkha’s King Drabya Shah, which can be dated back to approximately 400 years. Today, Khukuris have also become intrinsically symbolic objects as many of their design features are purely for symbolic purposes, with some of these traditional ornamentations going back so far that nobody knows exactly what they represent. Cho is a single, tiny toothed notch cut into the edge of the blade right in front of the handle. It has numerous layers of meanings. Some believe that it symbolises the crescent moon and sun (national symbols), a cow’s hoof (a cow is believed to be sacred), or the genitals of the Hindu Gods of power and destruction. The eye-shaped butt cap, which serves as a hard surface for pommel strikes, protects the end-grain on the wooden handle. The eye in question is the eye of Buddha, which can be found in many Buddhist monasteries and is representative of Nepal’s particular fusion of Hinduism and Buddhism. A complex engraving runs up the spine of the blade called the “Sword of Shiva”, “Finger of Strength”, or “Red Feather”, which is frequently filled with brass wire which symbolises speed, power, and sharpness. A Khukuri made for general use typically has an overall length of 16-18 inches and weighs between 450-900 grams. While, Khukuris made for souvenirs and other decorative purposes come in various sizes to meet the popular demands.

Khukuris are classified into several types based on their shape and blade profile. Their shape progresses from very slender to very broad and robust. No one knows for certain where or who created such shapes, but it is assumed that the broad ones were made in the eastern Nepal, while the slender and curved ones were made in the western Nepal. Among them, Sirupate is one type of khukuri that is thin and narrow, having a slender outline. In most cases, the spine is also on the straighter side. Because of its sleek shape, it is light and easy to carry and use. As the name itself suggests, its shape is inspired by a leaf called “Siru”, found in the hilly regions of Nepal. Similarly, Baaspate is another type of Khukuri founded in Dharan, which emerged after the establishment of British Gurkha institutions. It has a broader blade than Sirupate which is heavier but more effective. The term “Baaspate” refers to the leaf of a bamboo tree. Thirdly, Kerapate is a large and heavy variation with a blade measuring 25 inches or longer. Many of the Khukuris in history fall under this category. These kinds of Khukuri have a very narrow purpose that falls under two opposite extreme ends from aggressive to subtle; to kill or to keep. Similarly, Budhune is a traditional heavy version whose longer versions were used by our soldiers as their primary weapon during the Anglo-Nepal wars of 1814-1816.

Some blade profiles are very broad in the chest and have broad belly shapes, while others are broad in the chest but deep in the belly, producing a beautiful shape with power in the front portion than those of other blade profiles. It is obviously better and faster. Another type that has a very curved profile and no shoulder or peak in its spine is the Chakkre. The spine goes in a continuous curved flow from bolster to tip which gives it an interesting look and resembles the shape of a crescent moon. Based on this profile, Salyani & Gi1 are the popular versions currently available in the market. Sidhe, a rare variation of Khukuri, is preferred by farmers, shepherds, and villagers in far western Nepal for daily survival. The spine has no pronounced shoulders but it gently slopes, going towards the tip from the bolster. Chuchche is another version of Khukuris, which first appeared somewhere in the middle of the 20th century. The contour of the front edge is fairly straight till the peak and only then it takes the re-curve shape of a typical Khukuri. This category primarily includes Khukuri like Limbuwan, Srijung, and a few varieties of Chitlangs and Chainpure.

These historic blades have always been made out of high-carbon steel traditionally. The small portion of the tang that protrudes through the end of the handle is hammered flat to secure the blade. (A tang is a piece of metal, which sticks out from the lower end of the blade and is hidden inside the hilt making it easier to hold the sword.) The tang of the blade typically extends all the way through to the end of the handle. Khukuri blades have a softer spine and a hard, tempered edge. The handles of Khukuris, which are typically made of buffalo horn, are frequently secured with a type of tree sap known as laha (Himalayan epoxy). Since only the portion of the handle that touches the blades is burned away, the tang can be heated and burned into a wood or horn handle to ensure a tight fit. The majority of Khukuri scabbards are made of metal or wood with an animal skin, metal, or wood covering. It comes with two small knives in the scabbard; one is blunt (Chamak), and the other one is sharp (Karda). The blunt one is used to start fires with a flint, while the sharp one is a multi-purpose knife.

In Nepal, the Khukuri is much more than a knife or a weapon because of the religious values it carries and the beliefs that have been incorporated in the Nepalese culture. The blade’s shape represents the trinity symbols of “Brahma”, “Vishnu”, and “Shiva”, the three major Hindu Gods. The Khukuri is also worshipped on different occasions and festivals. It is thought to have spiritual power to ward off demons, evils, and nightmares. So, it is kept under the pillow of those who are suffering from a sleeping disorder. As the saying goes, “A man with a Khukuri represents a man of honor, dignity, courage, and loyalty who would kill and get killed for the rightful cause”. This reflects the significance of the Khukuri in the Nepalese society.

Yomari: A Special Delicacy Loved By All