Indra Jatra: For the God of Rain 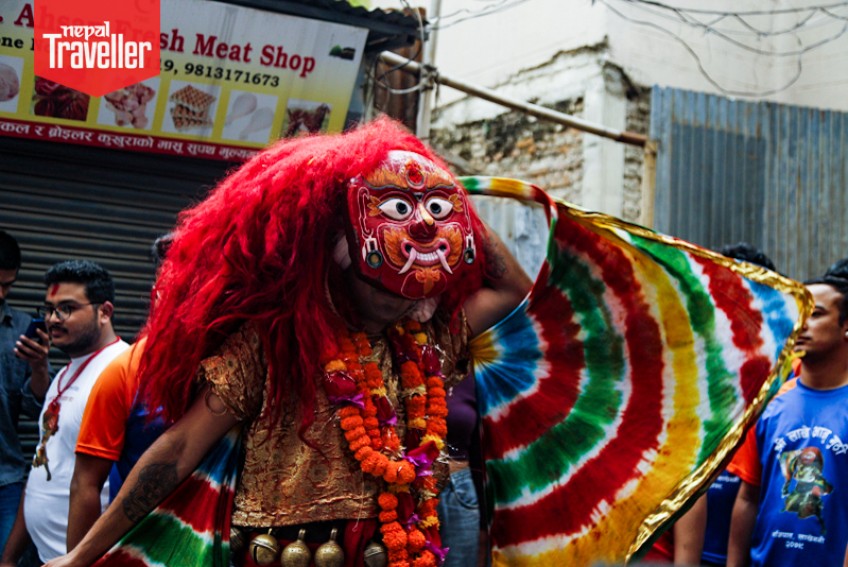 Indra Jatra, locally known as Yenya Punhi (in Newari, Yen means Kathmandu and Ya means celebration) is perceived as the most fascinating and significant festival of the Newar community in the Valley.

As per general perception, an eight-day-long celebration of Indra Jatra leads to the inauguration of the month-long festival season of autumn. Living goddess Kumari, Bhairav, and Ganesh's chariot procession also takes place along the main streets of Kathmandu during Indra Jatra.

The celebration of Indra Jatra starts with the erection of a sanctified wooden pole (lingo or lingam) made of pine that has had its limbs and bark scraped off of it. The pennant of Indra is unfurled from top of the pole at Basantapur Square in front of the historic Hanumandhoka Palace. Men tug on ropes as it is eventually dragged to Durbar Square.

In the evening, Lakheys depicted with a fierce face, rigorous fangs and decked in mane of red or black hair dance amid the deities relentlessly and energetically aided with the loud sound of traditional drums. Oil wicks are used to brighten the sacred shrines and historic palace edifices around Kathmandu Durbar Square.

Every evening, an amendment depicting the ten earthly incarnations of Lord Vishnu is enacted on the platform in front of the Living Goddess temple. The colossal representation of Akash Bhairab's head is placed on public display directly facing his temple at Indra Chowk.

The day before the full moon, in the late afternoon, people gather to witness and pay homage to the chariot carrying Kumari which is followed by two other smaller chariots carrying an archetypal of Ganesh and Bhairav through the winding alleys of Kathmandu. Ecstatic crowds huddle near Hanuman Dhoka Palace to witness the anxiously awaited Living Goddess chariot procession and catch a glimpse of her.

In a ritual called Yosin Kwathalegu, the Yosin pole erected in Durbar Square is toppled on the eighth day. The celebration of Indra Jatra comes to an end with this ritual.