Hanumandhoka Durbar Museum: An Ideal Cursor to the Past

Spreading over five acres, Hanumandhoka is the manifestation of royal refinement in Kathmandu. 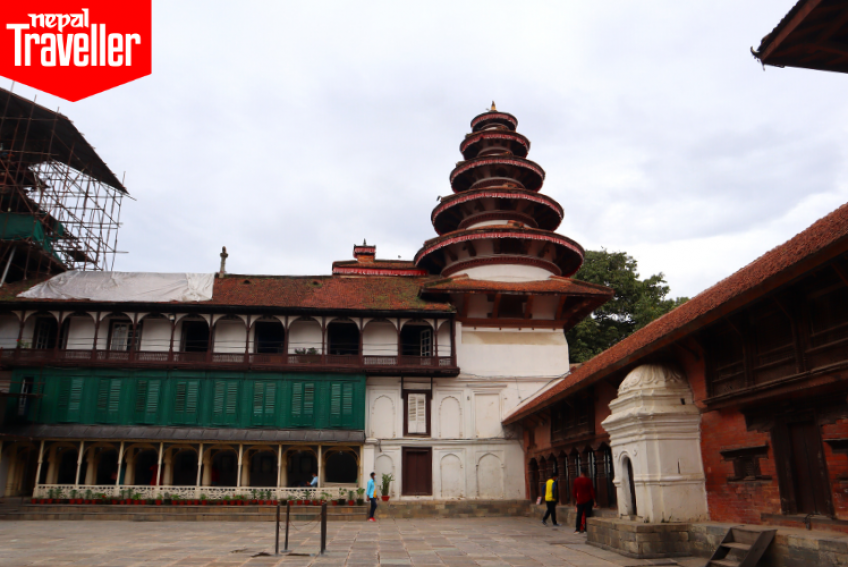 The Hanumandhoka Museum showcases a multitude of traces used by the erstwhile Shah dynasty during their monarchy. The pavilion within the majestic palace was reincarnated and assembled as the Hanumandhoka Museum to give visitors a peek into the royal sphere of lifestyle and possessions of former monarchs.

The Hanumandhoka Durbar Square is the pinnacle of mediaeval Nepalese architecture and culture, incorporating the plethora of artefacts carved during the sovereignty of the Malla and Shah dynasties. Hanumandhoka Palace served as the abode of the Shah and Mala dynasties for many decades. Hanumandhoka's notoriety and uniqueness have accelerated since it was inscribed as a World Heritage Site by UNESCO in 1979.

The name Hanumandhoka was inspired by the stone idol of the Hindu deity, Hanuman, when it was installed adjacent to the main entrance by profound art lover Pratap Malla. Myriad temples of pagoda, sikhara, and dome architectural styles are dotted around the Hanumandhoka Durbar Museum. The palace has astonishing historical, archaeological, and religious value and is ironic in literary cultures. It took centuries to complete the endeavour after the construction of the intricate wood carvings in the palace began in the middle of the 17th century. Spreading over five acres, Hanumandhoka is the manifestation of royal refinement in Kathmandu.

Even after the royal family and Shah King moved into the Narayanhiti Palace, the monarchy proceeded to own the sphere of influence. The pavilion within the majestic palace was reincarnated and assembled as the Hanumandhoka Museum, also known as the Tribhuvan Museum, to enlighten visitors about the royal sphere of lifestyle and possessions of former monarchs. The Hanumandhoka Museum showcases a multitude of traces used by the erstwhile Shah dynasty during their monarchy.

In contrast to being aesthetically appealing and enhancing the magnificence of the palace, the numerous stone spouts and ponds that Hanumandhoka Palace has also helped to maintain the ecosystem within the premises of the place.

The Hanumandhoka Palace is segregated into several chowks, each with distinct significance.

You land at the renowned Nasal Chowk immediately after entering the Hanumandhoka Palace. Nasal is the Nepali word for ‘dancing’. Consequently, the Dancing Shiva Statue in the square's northeast corner became the inspiration for the name Nasal Chowk.

At the northeastern corner of Nasal Chowk, the PanchMukhi Hanuman Temple is a striking structure with five circular roofs.

Nasal Chowk was used for the inauguration ceremonies of the kings. Amid the courtyard stands the coronation podium. The crowning of King Gyanendra in 2001 marked the most recent use of Nasal Chowk for coronations.

Sisha Baithak (Audience Chamber) of the Malla King provides Nasal Chowk with a contemporary flair. The Malla throne and portraits are featured in the open Varanda variant of the Baithak.

Mul Chowk is featured in a quadrangle architectural design and is exclusively used for the royal family's religious commemorations. It was built in 1564 AD by King Mahendra Malla, but the first citation of the temple dates from around 1627 AD. The Mul Chowk is believed to have been reconstructed by King Bhaskar Malla, who also gave it its contemporary aesthetic.

As the word "Mul" implies "principal," the name Mul Chowk designates the foremost proximity for all principal religious rituals and ceremonies within the palace. These sacred ceremonies comprised bratabandha, religious rites, wedding ceremonies, the e crown prince and chief ministers' inauguration, and the coronation of a few former monarchs.

Lohan Chowk is situated south of Mul Chowk and southwest of Nasal Chowk. The Lohan Chowk was crafted into the Chaukwath architectural masterpiece (four towers residing at the four corners of a quadrangle). All four structures are said to have been built as the king's residence following his victory over Kathmandu City. Since then, Shah kings have resided in Lohan Chowk throughout their monarchical era before relocating to Narayanhiti.

The name Lohan is derived from the word "lohan," which translates as "stone." It is also regarded as Tejarath Chowk since Tejarath Adda resided here before the Shah dynasty reassembled the structure. According to inscriptions and archives, the Shah monarchs referred to the courtyard as Basantapur Tower.

The tower's artistry is unparalleled in its architectural approach. As King Prithvi Narayan Shah embraced Nepali artists and merchandise, he asserted the construction of Lohan Chowk as the first approach to development. Consequently, it is recognised as the pinnacle of Nepali wooden architecture.

The building is constructed in neoclassical architecture, endorsed by Rana resign in Nepal. The single storied exhibition building has no windows on the rear wall, but a small window with a square gill design is built in the middle level of the main door. The inner section has double air circulation for half of the space.

The tower was built by the prior Prime Minister, Junga Bahadur Rana, built the tower and is predicted to fetch Rs. 110 million as the national crisis fund. The treasures were relocated to a new vault building constructed by Prime Minister Chandra Samsher Rana when this building began to crumble down. The artefacts on display were buried in a demolished structure between Faras Khana and Nuchhechowk.

On the 13th of Ashad, 2068 B.S, trinkets of historical, archaeological, and cultural significance were buried in an iron safe during the renovation of buildings between Nhuchhen Chowk and Faras Khana at Hanumandhoka Durbar. These materials have been chosen diplomatically, and some of them are now on exhibit.

Showcased artefacts at the Hanumandhoka Museum

The modules on display include god and goddess figurines that have been used in various religious and cultural activities; gold, silver, and copper centrepieces; gold and silver coins; scarce gold coins used by the East India Company, gauging equipment from the historical time frame; and a silver lunar chalice that was used to decorate an elephant's head during a coronation ceremony.

There are two palanquins on display along the east side of the courtyard in Nasal Chowk that were used to convey the royal nobles.

One exquisitely crafted palanquin used to carry the bride during the royal wedding procession as she entered the royal palace is on display. In 2026 BS, the displayed palanquin was assembled to bring princess Aishwarya Shah as the bride in the wedding ceremony (1969 AD). This palanquin was also used in the marriage ceremony of Princess Sruti Shah, daughter of King Birendra Bir Bikram Shah and Queen Aishwarya Shah.

The next palanquin was solely used to convey the bodies of the late monarch, queen, prince, and princess. After King Tribhuvan's demise in the Zurich hospital in Switzerland in 2011 BS (1955 AD), the displayed palanquin was used to carry his corpse from the airport to Tundikhel. Tenderly, it was devised to take the body of Queen Aishwarya Shah, who perished in the Royal Palace Massacre in the year 2058 BS (2001 AD).

Destroyed Land Rover in a blast

The late King Mahendra Bir Bikram Shah's Land Rover Jeep, which was destroyed in a bomb blast in Janakpur on January 22, 1962, is one of the prominent showcases in the Hanumandhoka Museum.

Gaddi Baithak is a neoclassical palace in Kathmandu's Durbar Square, which was built in the year 1965 B.S. (1908 A.D.) during the time of Rana Prime Minister Chandra Shamsher Jang Bahadur Rana. It is an ancient relic site with historical and political significance. This neoclassical tower, destroyed in the 2015 earthquake, has now been restored and is open to the public. The Government of Nepal and the US Ambassador's Fund restored the hierarchy after the devastating earthquake on April 25, 2015, severely destroying most of the building's architecture.

The primary significance of this building was to present the credentials of diplomats as well as to meet high-ranking foreign officials. Various meetings and conferences were held in Gaddi Baithak during the Shah Monarchy.

The Head of the Nation, the Prime Minister, and diplomatic delegates, depict the chariot of Shree Ganesh, Shree Kumari, and Shree Bhairav, which is taken out on the auspicious occasion of Indra Jatra, from the exterior veranda of this tower.

On the basement level of the Gaddi Baithak, which is currently open to the public, are documents with photographs illustrating the political and historical events from the Valley Unification Campaign initiated by king Prithvi Narayan Shah.