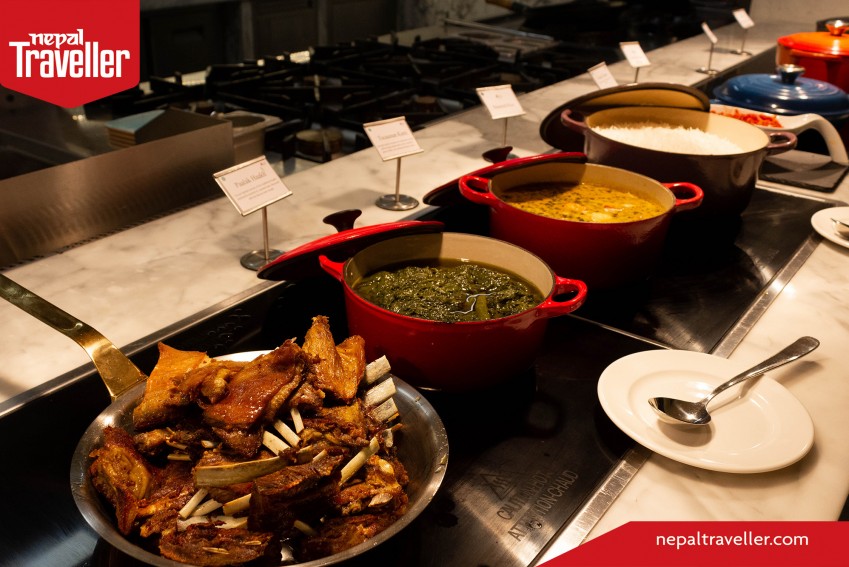 A showcase of authentic Kashmiri cuisine, with dishes being curated by Indian Celebrity Chef, Sanjay Raina, ‘Flavours of Kashmir’ starts on November 12 and lasts for a fortnight at Aloft Kathmandu Thamel

As the weather starts to drop and the chills begin to kick in, warm your senses with ‘Flavours of Kashmir’ this November with a bespoke menu prepared for the Kathmandu winter by Indian Celebrity Chef, Sanjay Raina, the undisputed Ambassador to Kashmiri cuisine around the world.

Known throughout India and the world as ‘Paradise on Earth’, Kashmir is blessed not only with natural beauty, but also a heritage of divine cuisine. A blend of three different cooking styles-that of the Kashmiri pandits, Muslims and Mughals, this cuisine incorporates the use of spices like cardamom, cloves and fennel. Of late, aspects of culinary styles of regions like Afghanistan, Persia and Central Asia are also noticeable in Kashmiri food.

Speaking of this exclusive food experience, General Manager of Aloft Kathmandu Thamel, Vikram Singh shared his excitement in bringing the authentic flavours of Kashmir to Nepal. “Chef Raina is known for developing menus with an unrivalled commitment to detail that have resulted in unforgettable dining experiences for high-end state dinners and food festivals around the world. This is part of our culinary festival journey as we bring international food festivals to Kathmandu. In the near future we look forward to Spanish, Turkish among various other festivals in Aloft Kathmandu Thamel.”

The ‘Flavours of Kashmir’ festival was inaugurated by His Excellency Manjeev Singh Puri, the Ambassador of India to Nepal, at an exclusive reception dinner for Kathmandu’s diplomatic and business community. Following the inauguration, cultural acts showcasing Kashmir’s rich heritage were performed by the Indian Embassy’s Swami Vivekananda Cultural Centre. The performers told stories through their movements and their expressions spoke volumes with the ending act being a Nepali dance.

“Every region has its own taste. The spices that we use make a lot of difference to the flavours of our dishes. Apart from the spices we also use a lot of local ingredients like saffron, almonds and dried fruits. People generally have a misconception that Kashmiri cuisine is full of meat, but that is not the case. There are a lot of vegetarian options too. If you actually count the number of dishes prepared today, you will find that there is an equal amount of vegetarian and non-vegetarian dishes. Kashmiri cuisine takes a lot of time to prepare and needs a great deal of patience. There are layers and layers of phases in preparing a dish. For instance if I were to make a Dum Aaloo, I would need to differentiate if I want new or old potatoes. Then I would need to choose potatoes of the same shape and boil them. This is followed by peeling them and poking them before ultimately frying them. So, Kashmiri cuisine comes with a lot of love and affection.”, Chef Sanjay Raina mentioned.

“For every month we have something special to give to the people. For this month, we thought that as winter is coming we should do something that matches with the climate and which people would enjoy. Since Kashmiri food has a lot of resemblance to Nepali food with its richness, we ultimately decided on it. People think that Kashmiri cuisine is generally very spicy, but it is not so. Planning and preparing for a festival is kind of like constructing a building. We have to brainstorm what kind of cuisine we are going to make, why we are doing it, how to procure ingredients and most importantly how the people react to it. So it takes a lot of team effort.”, said Executive Chef Sailendra Singh.

Including delicious vegetarian starters, divine main courses, and delectable desserts, the ‘Flavours of Kashmir’ food festival will be running at Nook, the hotel’s all day dining from the 12th to the 24th of November. Attend the buffet for Rs 2000++ with two complimentary house beverages.