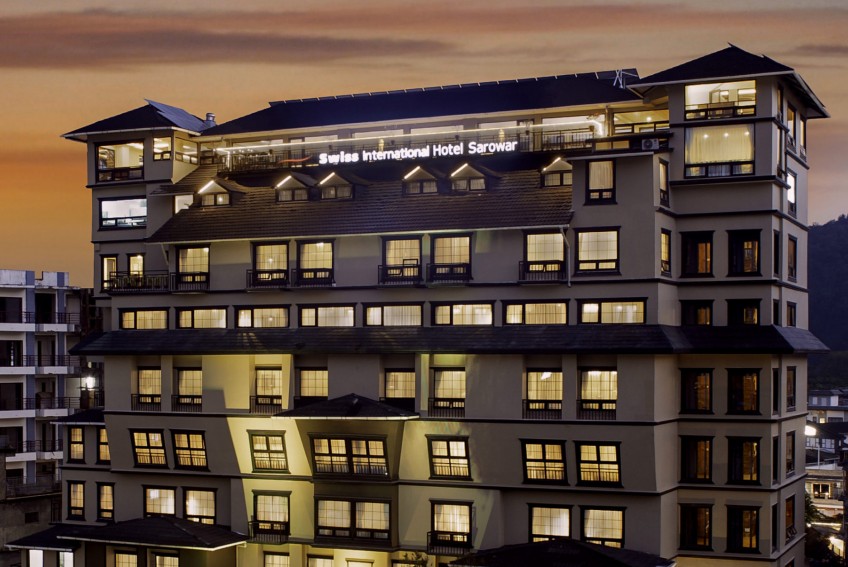 Swiss International Hotel Sarowar, an upscale, 96-room hotel in Pokhara, Nepal, offers stunning views of the Himalayan Ranges and the famous Phewa Lake. What is most impressive about this property is its eco-efficiency—the attention to green design and sustainability from below ground to the rooftop. Swiss International Hotel Sarowar opened at the beginning of this year. The hotel is powered by the sun, heated and cooled using geothermal technology and sells its digested combination of human and food waste as organic manure at the local market.

Swiss International Hotel Sarowar sits 2,655 feet above sea level. Its design incorporates Vastu Shastra, a traditional Hindu system of architecture, which literally translates to ‘science of architecture’. The interior of the hotel is infused with Nepali traditional architecture.

Energy efficiency was on top of mind throughout the design and construction process. Addressing geographical and climatic condition, the orientation of the building was made longer side parallel to north-south direction and stretching to east-west. This has minimized the area of wall exposed towards solar radiation. Walls are made of insulated concrete panels and windows are double-glazed. Bricks were not used because they produce excessive CO2 and CO during their manufacturing process.

The hotel is heated and cooled using a geothermal system. A tunnel 80 meters long and 4 meters below ground level was dug for it. Air passing through pipes is extracted by a centrifugal air blower. The air temperature in the tunnel is constant during all months of the year.

Grey wastewater from Swiss International Hotel Sarowar is recycled and treated before being released into the sewer system. Water systems are audited every four months. Staff check regularly for leaking dump valves, ensure that all water inlet valves are closing properly and check that level controls on water reuse tanks are working properly.

Human waste and food waste are collected in two soak pits for digestion into bio-gas. The bio-gas is later used for heating purposes such as cooking. The remaining sludge, with a moisture content of no more than 15 percent, is packed into plastic sacks and transported to the market for sale as organic fertilizer.

The hotel will transition to shower dispensers soon in order to eliminate individual plastic amenity bottles.