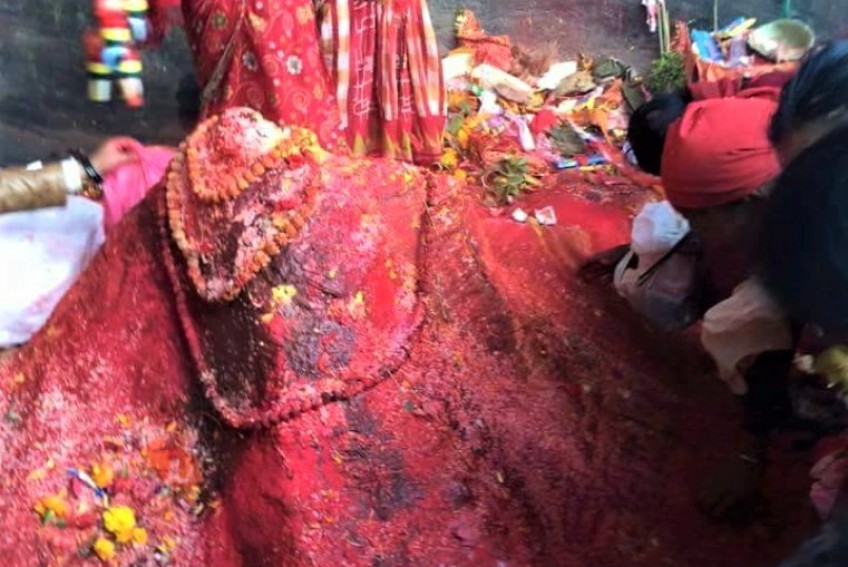 The temple is a central belief for Hindus and Buddhists. It is believed that the wish of having a child comes true when rituals are performed with pure heart and soul for childless couples.

Known as the second Pashupati in Bagmati Province, Dupcheswor Mahadev temple is one of the famous temples of Lord Shiva in Nuwakot district. The highly revered temple, which is visited mostly for its religious beliefs, is a natural structure in the middle of big rocks. Thousands of visitors come to worship the temple all along the year but, the temple is crowded mainly during festivals like big Mela on the days of Dhanyapurnima (full moon day in Mangshir or Poush), Shivaratri, Teej, Balachaturdashi, Janaipurnima, etc. Many pilgrims come here and offer cow milk to God.

According to mythology, around 400 years ago, a local Tamang's milking cow was lost. Later, it was found that the cow used to pour its milk over the Shila – a unique stone projection of a cylindrical shape. The same stone now is considered the representation of Lord Shiva. Earlier, it was called 'Dudheshwor Mahadev' while, later, it became known as 'Dupcheswor Mahadev'.

The temple is a central belief for the Hindus and Buddhists. Mostly, the religious place is a destination for childless couples. It is believed that on doing some rituals with pure heart and soul, the desire or the wish of having children comes true. It is also said by the priests of the temple. Moreover, some pilgrims even say that dumb kids can speak after praying in the temple. The divine power of the temple is believed, and hence worshippers from different places come here to place their wishes (भाकल), and it comes true, they again visit the temple and offer cow milk to God.

A special carnival takes place at Dupcheswor annually on the full moon day of the Nepali month of Mangshir or Poush, called Dhanyapurnima. It is one of the biggest festivals in the entire district. The festival usually starts on the Ekadasi and ends on the Ekadashi. During this time, pilgrims from all over the country, as well as tourists visit this place. The place not only has local cultural importance but is also famous as a tourist destination in the district.

The Duspcheswor Mahadev temple is located on the banks of the Suryamati (Tadi) river. It is 60 km north of Kathmandu's Gangabu and 35 km east of Nuwakot's district headquarters of Bidur, Dupcheswor.
It takes 3 hours to reach there from Kathmandu in a private jeep. Likewise, it is a 15-20 mins walk from the Dupcheswor Mahadev bus station.