Akhi Jhyal, or eyed-window, is a masterpiece in wood carving that is unique to Nepal 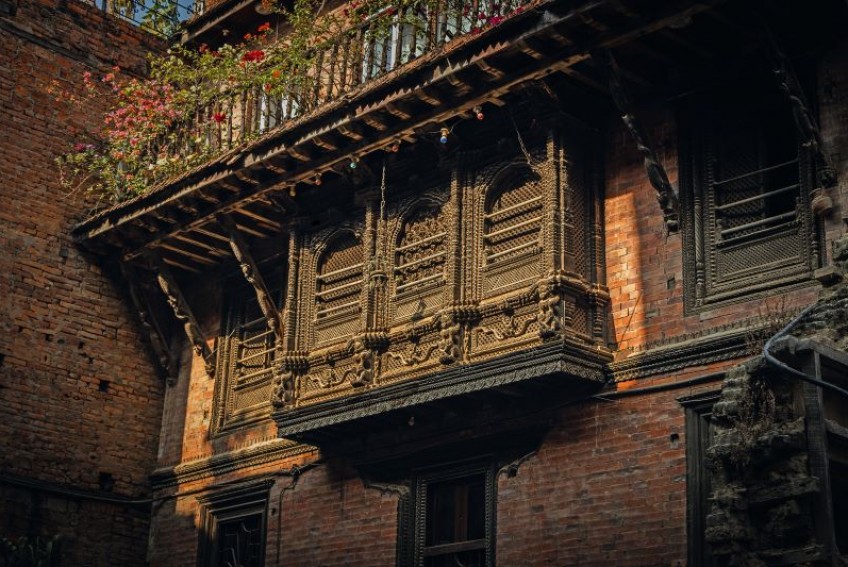 Akhi Jhyals were designed in a way that the insider could glance at everything happening outside while the outsider cannot see who is on the inside. It is believed to have been designed for a queen at the orders of a king to protect her privacy in the Lichhavi era.

Aakhi Jhyal, a mark of excellent workmanship with a unique blend of culture, are perfect souvenirs to take from Nepal

The land of wonders with ancient culture and the Himalayas as a backdrop, Nepal draws visitors for a variety of reasons. Some are lured by the call of the mountains, some are intrigued by the culture of ancient cities, and others come with hopes to find some sort of spiritual awakening. Returning back with interesting stories, a lifetime of memories and a beautiful souvenir is inevitable.

One of the things Nepal is renowned for is its delicate craftsmanship, be it on paper, wood, stone or metals. One such craft is that of making traditional Newar windows known as Aakhi Jhyal. The ornate windows carved completely out of wood are a symbol of Newar culture and artistry. These intricate architectural marvels are found on palaces, private residences and sacred houses across Nepal Mandala.

Ornamented with figures of deities, mythical beings, dragons, peacocks, auspicious jars, flowers and other elements, these windows weave a story of ancient folk myths and legends. Also the thoughts of why these types of windows were crafted, how long ago did this practice begin and where the first Aakhi Jhyal was built is sure to cross your mind.

Stories from the past tells a tale about the King's order to build a window that would let the people inside see everything on the outside but the people outside would not be able to see inside. Some say that the King gave the order so that his Queens could see the outside but not be seen by the public, some say it was built for defensive purposes. It is a mystery in our history how this skill was born. The most common understanding is that this skill was generated in the Licchavi era but these windows can be seen on buildings that predate that era.

The traditional craft of Aakhi Jhyal making still thrives in the ancient cities of Nepal. The art of wood carving has been passed down from generations to generations but only some have continued the trade. Those who still carry on the craft pride themselves as true custodians of traditional art and architecture.

Inside the Patan Museum, the reconstruction and restoration of the ancient palaces and temples after the 2015 earthquake are still ongoing. With intense concentration working away on some wood, Pushpa Raj Shakya was coincidentally working on recreating one of the intricate Aakhi Jhyals.

Shakya, who started working with wood at the age of 16, says he learned the craft in his hometown, Bungamati. Surprisingly he doesn’t come from a long generation of woodcarvers but he still feels fortunate in having chosen this path. “Making Aakhi Jhyal is all about precision, skills and experience. I have almost 30 years of experience working with wood but it was only after 10 years of hard work that I was skilled enough to make an Aakhi Jhyal.”

Shakya says that even before touching the wood to start making the Jhyal, he visualises the final product in his mind down to every minute detail. Even though modern machine tools allow craftsmen to cut wood in the precise size of the Jhya they are creating, the intricate and delicate process of carving the designs are all done by hand tools.

Shakya works with his hand tools like they are extensions of his own hands. He looks like he is casually chiselling away but any onlooker can see how focused and passionate he is. As he changes the chisels depending on what he is designing and tapping with the mallet with slight variation of pressure and angle. The slight and consistent tapping and the slow reveal of the design is a hypnotic experience. After hours of working, only a small portion of the whole window is carved.

The time taken to make a window varies according to its size and design. Simpler and smaller ones may take up to one week whereas intricate and larger ones may take up to months to finish. When asked what is special about Aakhi Jhyals, he replied, “Everything is made of wood, not a single nail is used because the whole structure is held together by interlocking carved pieces of wood at different angles. And it is a pleasure to look at the finished product.” His passion and experience in making Aakhi Jhyals make him a true custodian.

Imagine if you could take one of these complexly beautiful Aakhi Jhyals home with you. It would be a showpiece that would intrigue your family and guests alike. Along with the beautiful momento to show, you will have a travel story to tell as well. Traditional wood carving still flourishes in the old cities such as Patan and Bhaktapur. So if you want to buy Aakhi Jhyals, you will find shops in three Durbar Square areas that sell them. You can get a ready made product or order your own customised Aakhi Jhyal.

Santosh Wood Carving is one such store selling small, delicate Aakhi Jhyals in Tichhugalli of Patan. Santosh Silpakar, the second generation owner of the shop, says that most of his customers are Nepalis. All the eye-catching Jhyals hanging on the walls of his shops were handcrafted by Santosh and his father. From bijou windows to life-size windows, these shops offer a wide range of products.

These handcrafted Aakhi Jhyals can be the perfect gift for your loved one or a souvenir to take for yourself. If local and international tastes continue to appreciate traditional Nepali styles, the skills passed down through the generations will continue to be passed on for much longer.

Is Woodcarving A Dying Art?

Top 5 Traditional Art To Take Back As Souvenirs

Sarangi: Emotions Pouring Out Of Strings

The Myth Behind The Living Goddess, Kumari