Long Lasting Patterns: An insight into metalwork in the Valley 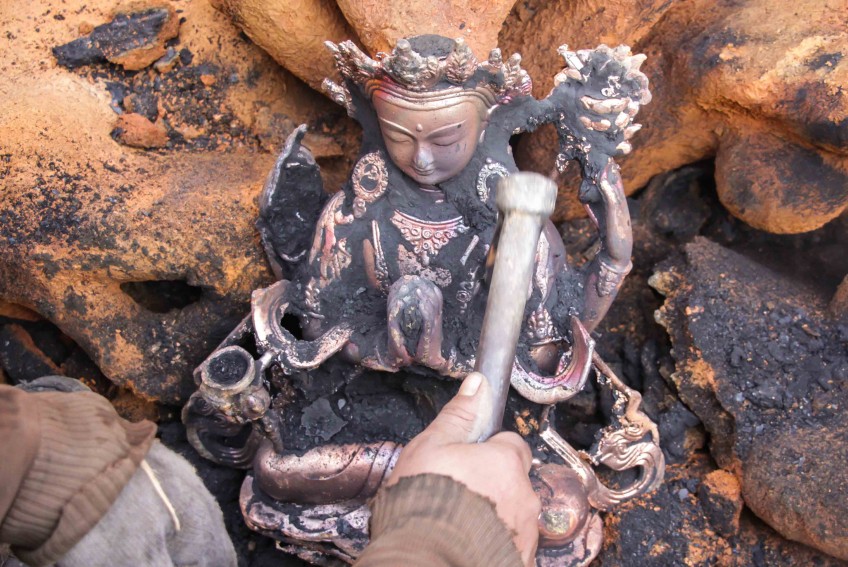 Though metalwork has appeared to exist in Nepal since the start of formal civilisation, it is difficult to pinpoint its development due to a lack of documentation. However, its mark on Nepali culture is undeniable. When Amshuverma brought a metal crest for the Changu Narayan Temple back in 607 AD, we have some evidence that it has existed since or probably before the seventh century. There is also some evidence that the Licchavi Kingdom used bronze for coins and jewellery which later evolved into the use of copper, gold, and silver. The Pala Dynasty of ancient Nepal has had a major influence on the metalwork of Kathmandu and its surroundings. Along with local myths and legends, exposure to a different form of handicraft encouraged the kingdoms to adapt this form of handicraft.

Like the rest of the society, metalwork has also been progressive. Variety of techniques were used when sculpting a statue. While the ancient Licchavi craftsmen preferred full bodies, broad hips, as well as full chests, other artists in other regions, adapted slimmer bodies, detailed limbs, fingers, and toes.

This occupation was tied well with the ancient Nepali caste system. Newari folks in Kathmandu and Patan are still well known for their metalwork. However, the family business might not remain as prevalent as it used to be. The occupation was well demanded and respected in the past as the kingdoms competed with each other. Now, this craft has evolved into something that is appreciated by everyone while only afforded by a few.

Currently, metalwork is given a higher artistic value. Despite that, there is still a very small market for this industry. Metalworkers in Patan tell us that their only audiences are the Chinese tourists and wealthy businessmen — also from China. But because the Chinese market had high demands for such a craft, they decided to industrialise it in their own country. Now that they can get a relatively cheaper price for a similar item in their own country, the main market has significantly narrowed down in ours. So the only ones who do purchase these metalworks are the people who prefer authentic and handmade Nepali metalwork.

Mim Maharjan, a seller at Kipu Handicrafts in Mahaboudha said “I’m probably the last person in my family lineage who will be involved in this occupation. The demand for the art has been drastically reduced due to the industrialised production in China.” While other crafts are being sold in an out of Nepal, metalwork still has its own share of problems — not having buyers. However, they believe that it won’t come to an end as it is an art appreciated for its originality.

Mahaboudha is a small town in Patan. It is where the majority of metalwork is made, polished, and sold. There are stores on either side of the road gleaming with varieties of monuments and ornaments. Further in there are places where numerous craftsmen do their share of specialised work.

People carving in patterns, making wax moulds, polishing and refining the monuments; all of this can be discovered in the cobblestone alleys. The Newari town provides the perfect ambience for tourists who like to take a peek into this art. Like every other Nepali town, the goods can be found while you walk around the main streets and when you make your way into the narrow alleys and courtyards. It truly is a locality dedicated to metalwork.

The complexity of the art is tied well into its construction. It takes numerous people and even more days to build a monument that is ready for sale. There are multiple people who all have different jobs to build one single monument. The process starts by creating a wax dash replica of a pre-existing statue or constructing a new design itself. Then cow dung is used to coat and mould the wax figurine; which is then further coated by a special combination of yellow mud and rice husks and its dust. Once the wax is coated and a solid mould is formed multiple holes are carved out on the bottom. After the mould is all dried up its ready for the next phase.

A large cement furnace is heated up using firewood for all the melting process. Firstly, the mould is inserted in the foundry and within a few seconds, the wax replica inside the mould melts away. Some of the wax is recollected so that it can be reused for future works. Cheap wax, however, is just added to the fuel. While the mould itself is getting its share of heat, the copper pieces are also brought in. Chunks of copper wires are pushed down a special kind of high-temperature furnace and melted down. It takes an hour or two for hundreds of kilogrammes of copper to be melted down. To make the process much easier and smoother, some amount of tin is used. The melted copper is then extracted into large iron containers and then slowly poured into the holes of the vacant moulds. It takes quite some time for the hot copper mixture to settle and to cool down. All the moulds that have been filled in by solid copper are then brought outside and cooled by splashing some water on it. Once that process is complete, the mould is ready to be cracked open to reveal the art. This process also requires its own set of specialised workers. Once the mould is all cleared up and washed, it is ready to be sent for further refinement.

These monuments are then sent to the nearby places in Imadol and Mahaboudha, Patan. These freshly formed monuments are then inspected for further work. The refining task involves using high-pressure gas torches and hammering the sculptures into its correct shape. It is then followed by carving in patterns and details into the sculpture itself. After that is complete it is then polished and ready to be painted on if necessary.

The painting process is also quite intriguing. While metal plating usually involves electrolysis and such, the gold plated on these monuments are painted on using varieties of small metal tools. The gold is initially brought in form of thin sheets which are then ground by hand on a stone grinder. To assist the grinding and painting, glass dust and mercury is also added to the mixture. Afterwards, nitric acid is used on the ground gold so that it can be painted on the monuments. The painting process is also very time consuming as the strokes and other details have to be extremely precise. Once this is completed, it is further polished and then put on display or sold directly to the buyer.

These metalworks are mainly sold to tourists who prefer “authentic handicraft”; because everything, including the grinding of gold, is done without industrialised machinery. A lot of these items are exported to Patan, Sundhara, and mainly Bouddha. Prices can have a wide range as it depends on the product quality, metals used, size of the sculpture, and the time invested.

Overall metalwork in Nepal has been praised for its authentic building techniques and various other qualities. The people involved in this field of work are confident that the products they make are strong and resilient to dents or cracks. The sellers also do their best to convince buyers despite the challenging market. And the buyers respect authentic artwork and all the dedication behind it. Thus, contribution from all sides and admiration for the art has allowed this century-old culture to remain significant in our society.

Is Woodcarving A Dying Art?

In The Valley Of The Gods

Bathed In Milk And Saffron