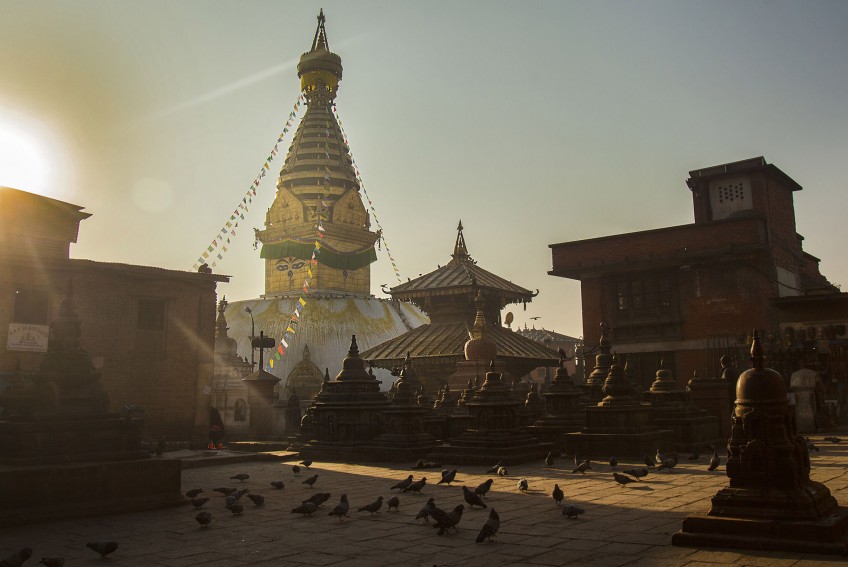 As I take the first of the 365 steps towards the Swayambhunath Stupa I feel at peace. Maybe it’s the woods that surround the stupa or the pacifying chants of ‘om mani padme hum’, the stupa located atop a small hill gives a positive and peaceful vibe.

The Swayambhunath stupa also known as the Monkey Temple is one of the most glorious Buddhist Stupas in Kathmandu. It is one of the many Buddhist pilgrimage sites in Nepal. The stupa located on the west of Kathmandu offers visitors information on the history and origins of Buddhism in Nepal. The temple is set in a serene and beautifully forested hill. The 365 old steps lead up to the hillside covered in woods to the peak, which offers a scenic view of the valley. The place is full of monkeys who reside if the woods that surround the place.

The stupa is believed to be 2000 years old and if you sit down and talk to the locals you’ll get to hear a lot of interesting stories. Here are a few facts you should know about the great Buddhist stupa:

1. The stupa’s white dome indicates the womb of creation whose phallic match is in the square tower.

2. On top of the Buddha’s Eye is a spire of 13 golden disks representing the ladder to enlightenment

3. The sleepy, all-seeing Buddha eyes that stare out from the top have become the quintessential symbol of Nepal.

4. The famous Buddha eyes gazing out sleepily from each side of the tower (oriented to the four cardinal directions) are those of the all-seeing Primordial Buddha.

5. Between each of the pairs of eyes is a symbol that looks like a question mark - this is the Nepali number "1" and represents the unity of all things.

6. Regarded as the most vital Buddhist site in the capital, the shrine’s all-watching eyes is said to be that of Lord Buddha gazing from the peak that is the archetypal landmark of the country.

7. Gold plaques rising above the eyes like a crown depict the Five Dhyani Buddhas, celestial buddhas who are associated with the five senses, the four cardinal directions plus the center, and many other symbolic groups of five.

8. The Five Dhyani Buddhas are further honored with special shrines at the base of the stupa. They face the four cardinal directions, plus one slightly left of east to represent the center direction. Between them are shrines to four of the Buddhas' consorts. Linking all nine shrines together is a chain of prayer wheels and butter lamps. The five main shrines are enclosed in beautiful gilded copper work, for which the Kathmandu Valley is renowned.

9. At the base, there is a ring of small Tibetan prayer wheels surrounding the dome. Many pilgrims as well as visitors walked countless rounds around the dome (in a clockwise direction), chanting prayers and spinning the wheels to send their prayers and chants to the heaven.

10. The two main festivals celebrated at Swayambhunath are Buddha Jayanti(in April or May) and Losar (in February or March). During these times, many pilgrims visit the temple and the monks create a lotus pattern on the stupa with saffron-colored paint. Also important is the month-long Gunla celebration (August or September) marking the end of the rainy season.

Shashwat Pant is a content writer at Nepal Traveller. He is writer by day and a dreamer by night. He loves to spend time discussing about sports and Geo politics.