An intensely sugary delight, Chaku is a celebrated Nepali dessert, mostly eaten during the festival of Makar Sankranti 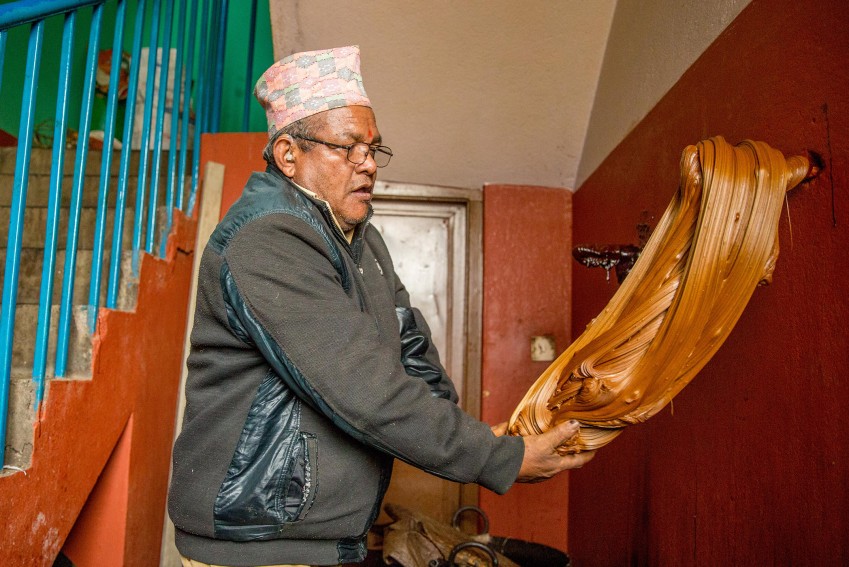 Reeya Pradhan from Nepal Traveller ventures out to Tokha, the heart of chaku making.

An intensely sugary delight, Chaku is a celebrated Nepali dessert, mostly eaten during the festival of Maghe Sankranti. And although quite popular in the bustling streets of the busy Asantole, Chaku has been customarily prepared in Tokha. 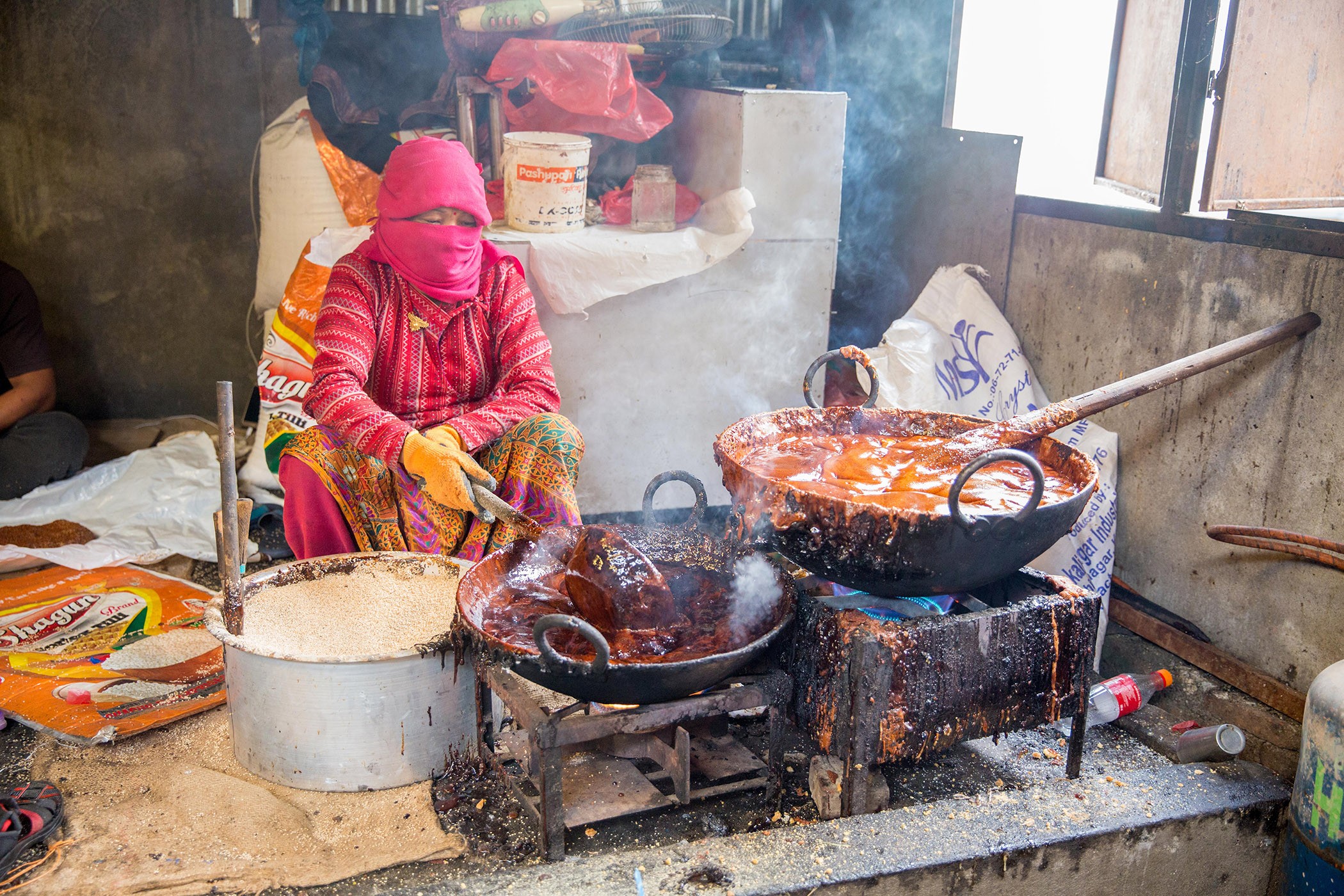 Chaku is a part of traditional Newari cuisine; it serves as an integral ingredient in many iconic dishes that has made the cuisine so well loved. The product is made from raw cane sugar called sakhar or jaggery, ghee, and nuts. The mixture is cooked down in giant metal vats on wood fires until it is homogenised and the sugar has caramelised and solidified. The brown mixture- molasses, after being cooled for a bit is then pulled and stretched on a hook by hand in a manner similar to making taffy for about 5 to 10 minutes, and then cut into small rolls to be packed and sold. 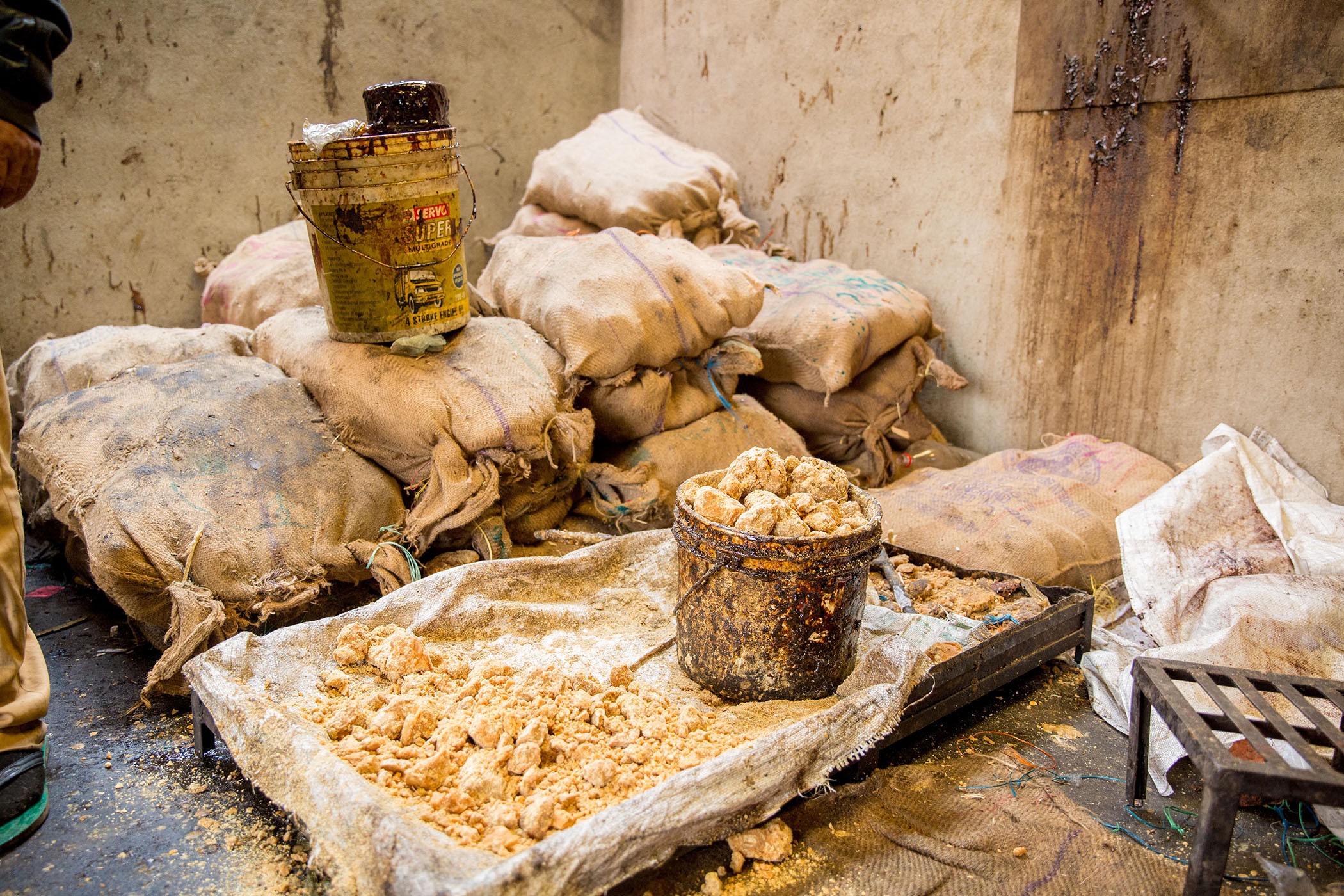 Chaku is not only eaten as it is but is also used to prepare dishes like Yomari, the sweet Newari dumpling, and Til ko Laddu, balls of sesame seed and molasses. Chaku is also eaten on the auspicious day of Maghe Sankranti, which basically means the start of the month of Magh, by being melt and poured alongside ghee on rice, and mixed. 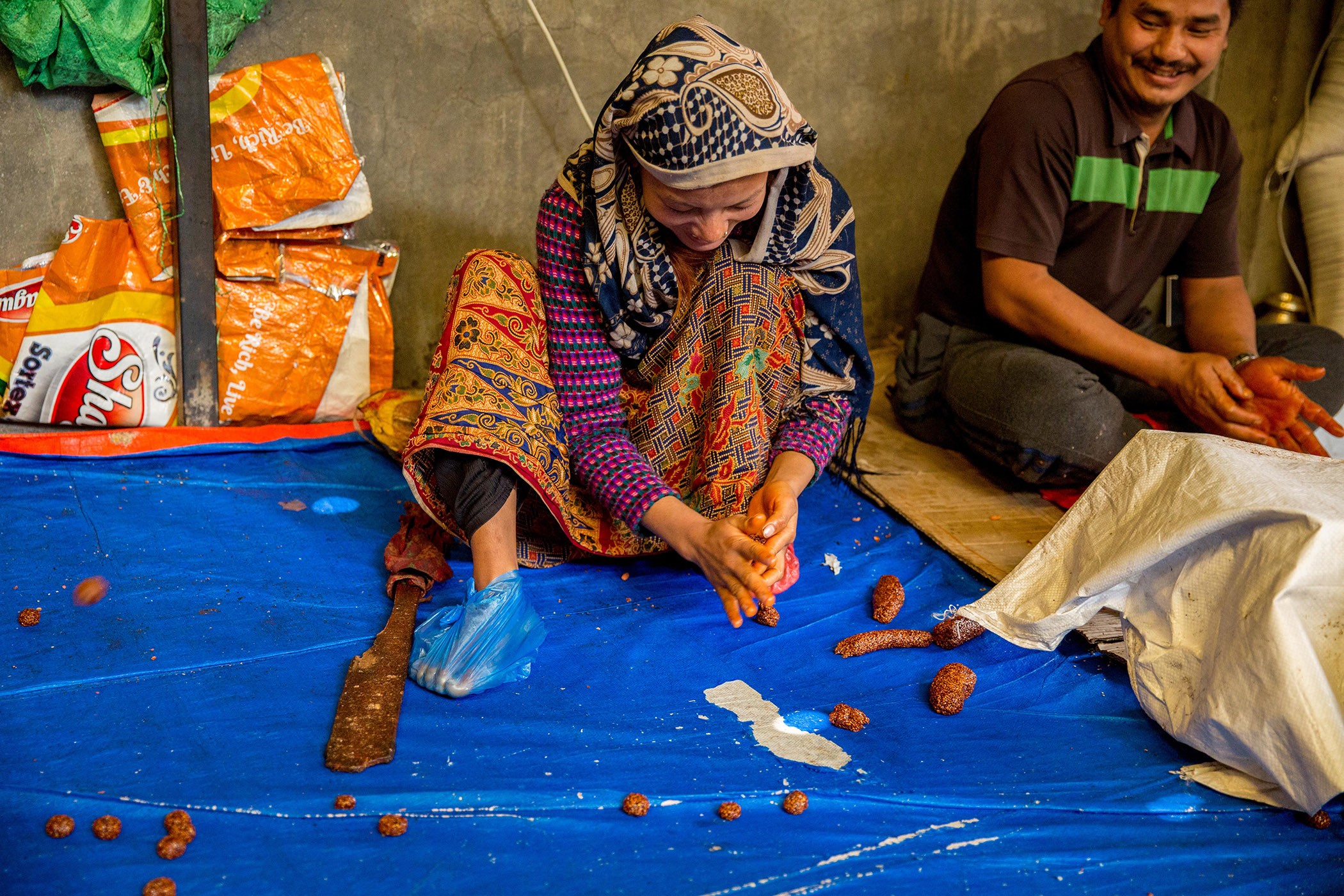 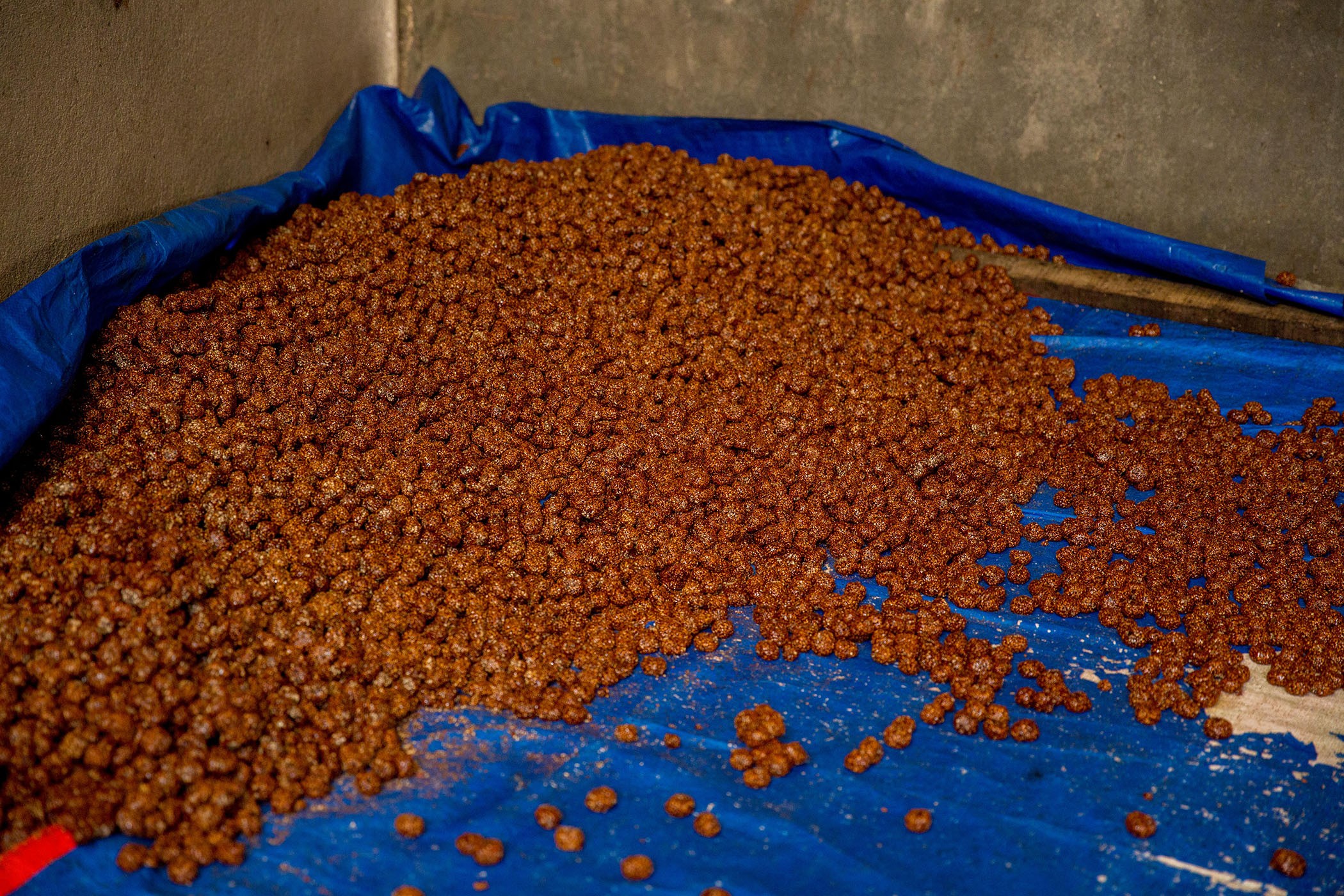 Maghe Sankranti is a Nepali festival observed on the first of Magh in the Bikram Sambat calendar that marks the end to the winter solstice which falls in the month of Poush. The festival venerates the Sun God who is regarded as the symbol of power, divinity and wisdom. The celebration is noted as the beginning of an auspicious phase in Nepalese culture and is cited as the 'holy phase of transition’.

Observant Hindus take ritualistic baths during this festival, notably at auspicious river locations. These include people taking dips near Sankhamul in the Bagmati near Patan, the Gandaki/Narayani river basin at Triveni, Devghat near Chitwan Valley, Ridi on the Kaligandaki, the Koshi River basin and Dolalghat on the Sun Koshi. Festive foods like Til ko laddu, ghee and sweet potatoes are prepared and served as prasad  of religious offerings. The mother figure of each household wishes longevity and prosperity to all family members. 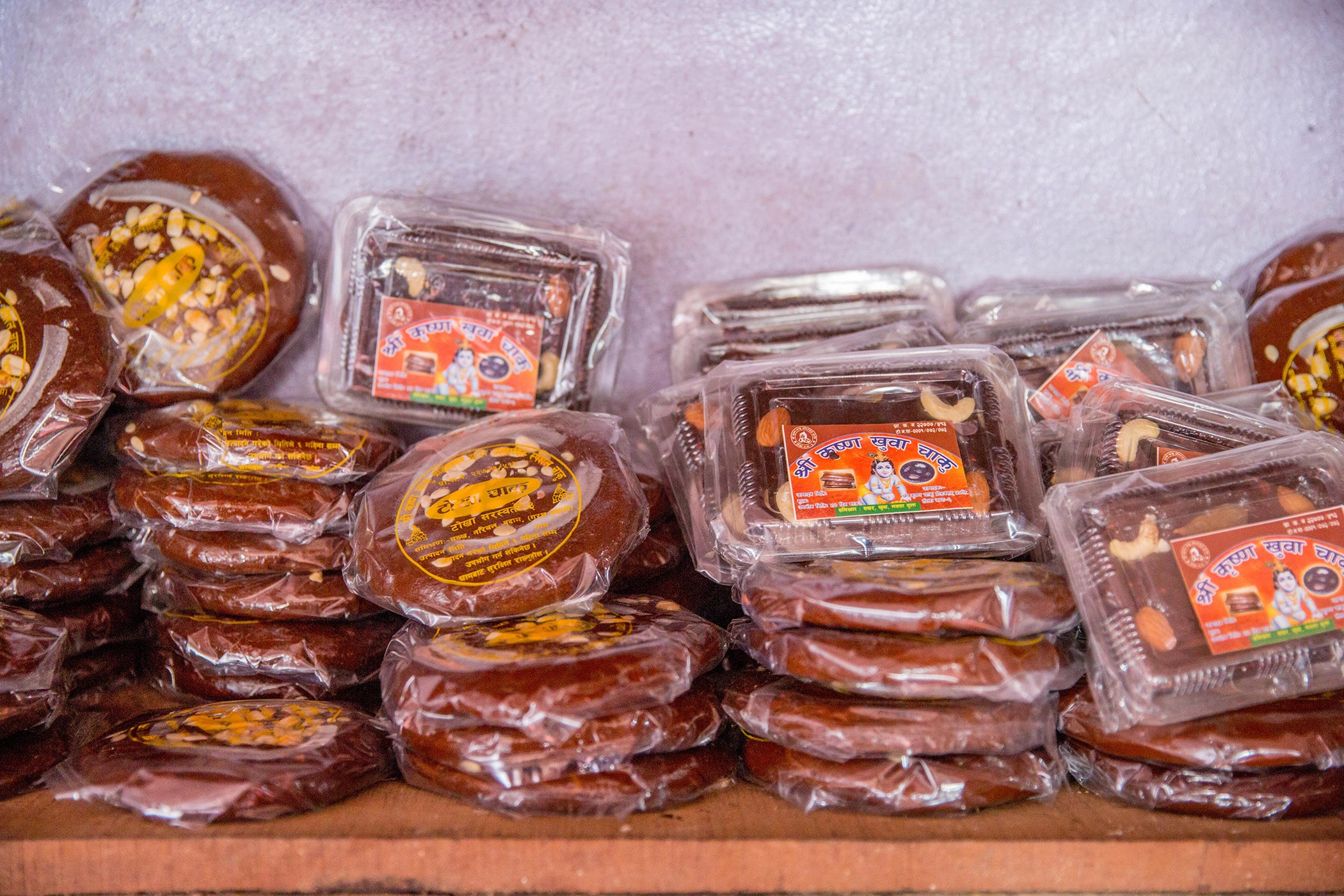 Chaku has always been ceremoniously prepared for the onslaught of Makar or Maghe Sankranti where celebrators consume Chaku with their rice or in the form of Taula (Chaku shaped into a ball with sesame seeds). It is largely consumed this time of the year. 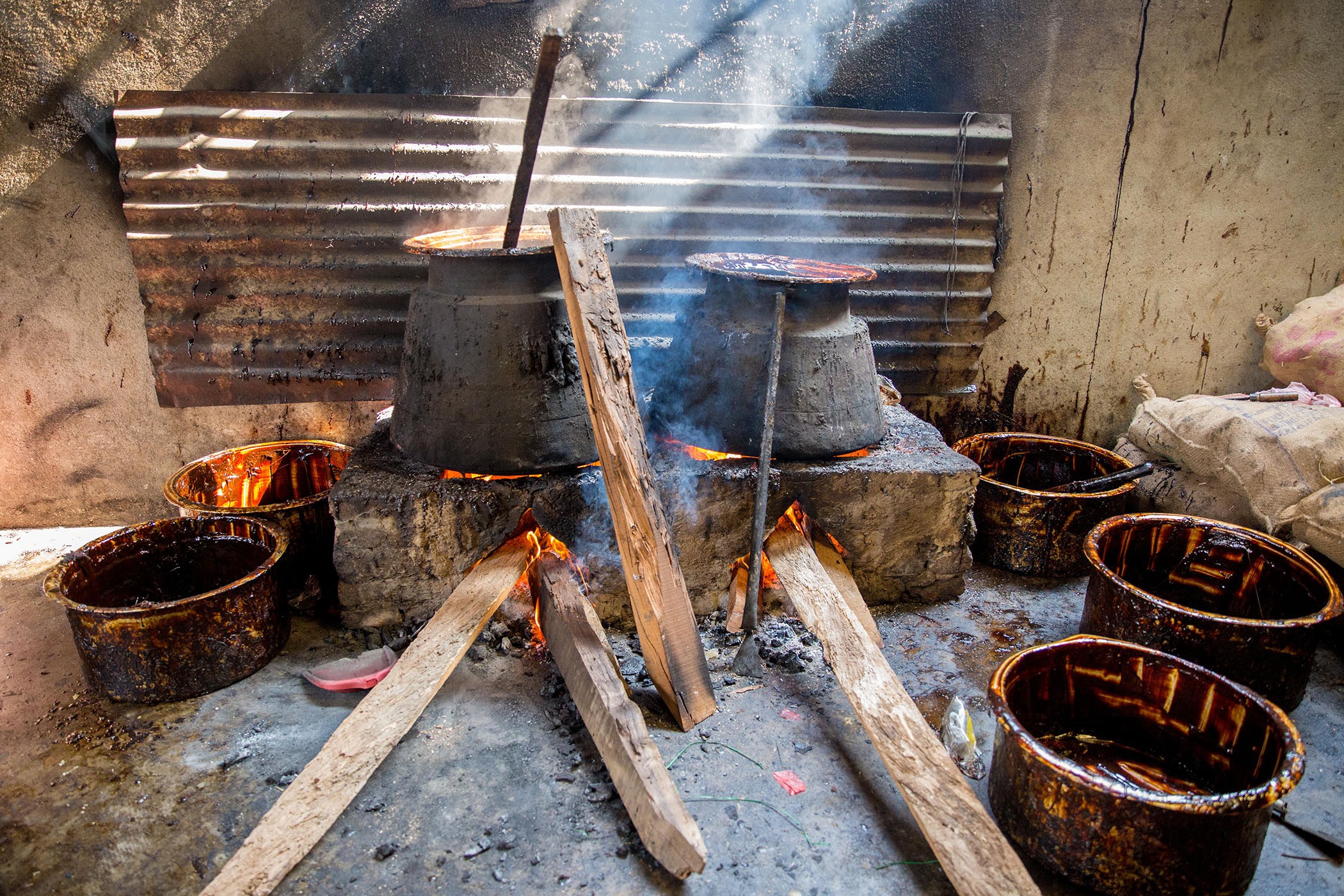 All the way in Tokha, in the Southwest corner of the Kathmandu valley lies the heart of Chaku making. The streets are lined with shops that prepare and smell them, and once you enter the narrow path, you will at once be hit with the distinct smell of it. Tokha is well known for producing this typical Nepali chocolate, and Shree Krishna Chaku Production has been said to be one of the oldest and most prominent manufacturers of the delicacy. A business that has been passed down from generations, the shop has been increasingly busy for the winter season- when the demand for Chaku is at its peak.

There are several stations inside their small production that carry out different tasks that are essential in Chaku making. A cluster of men and women carry sacks of sakhar to the cooking area where the ingredients are weighed and mixed and brought to a boil- this is the most dangerous part of the job, the boiling sugar is extremely hot and spits. The mixture is continuously stirred and laid in frames to cool at room temperature once prepared. The cooled product is then carried to the metal hooks and then stretched around the contraption to aerate the Chaku which gives it the desired the dark colour it is known for. Another group of ladies are involved in weighing the finished product and adding in the dried fruits and nuts and packaging the Chaku for delivery to the market. Modern times have seldom touched these kinds of businesses but people are slowly incorporating the developments of science into these conventional practices. They have recently installed a new machine that aerates the Chaku, saving a lot of time spent on manual labour, and have opted for the metal pots than the clay pots the people have always used. They prepare of minimum of 800 kg of Chaku per season according to the demand they receive from the market. 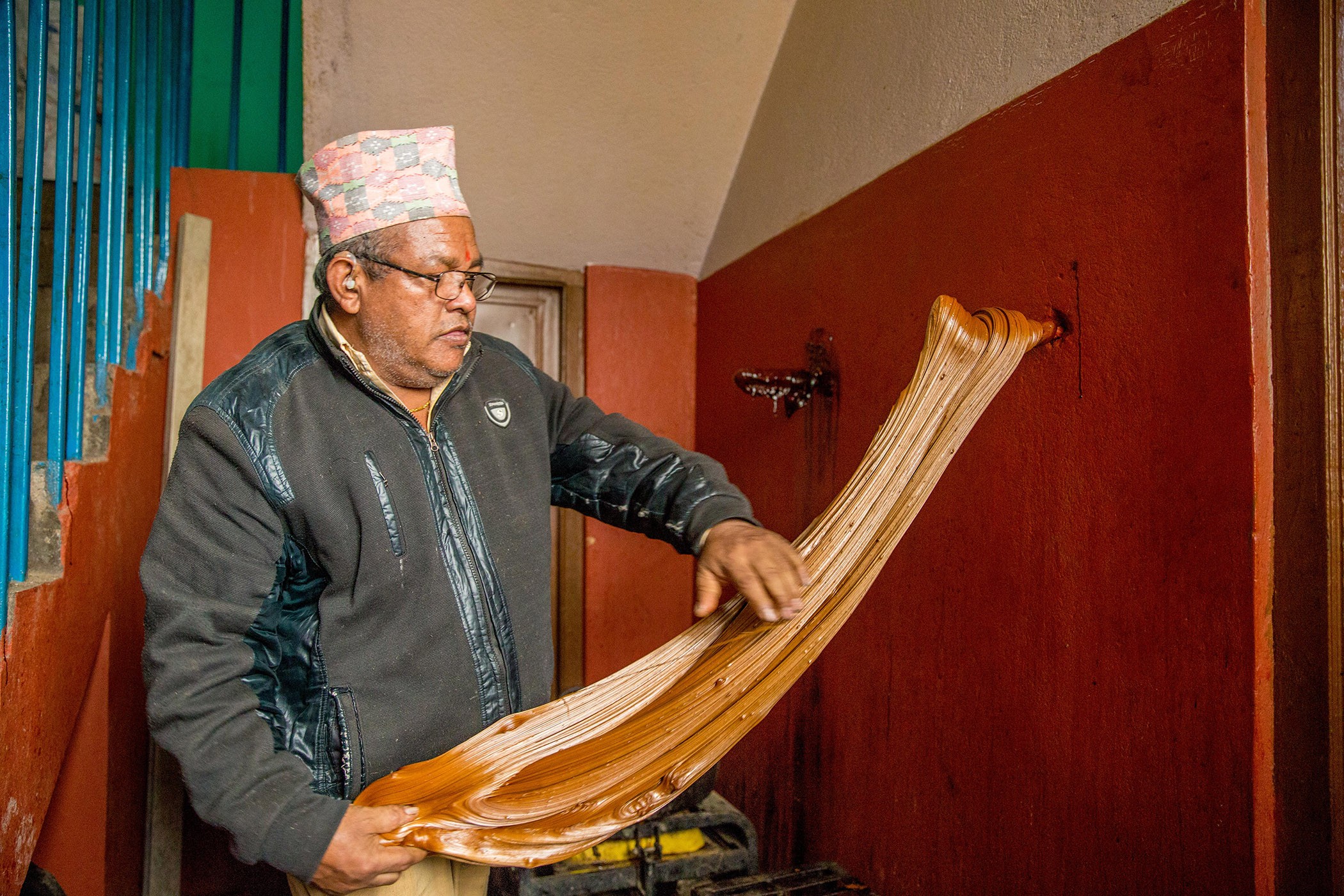 "Certainly, there are issues when it comes to businesses like these, a lack of raw materials being one of them. Sugarcane fields are drying out, and without jaggery, the core ingredient, production will come to a complete halt. But since there is a high demand for Chaku, our family business is passing on its knowledge generationally and to those who are enthusiastic to keep the art going. The Chaku is sold to the traditional Newari localities in Kirtipur, Patan and Bhaktapur but is centrally mass distributed from Asan. From Asan tole, people have managed to export the product even to the United States,", says Krishna Lal Shrestha, proprietor of Shree Krishna Chaku Production. 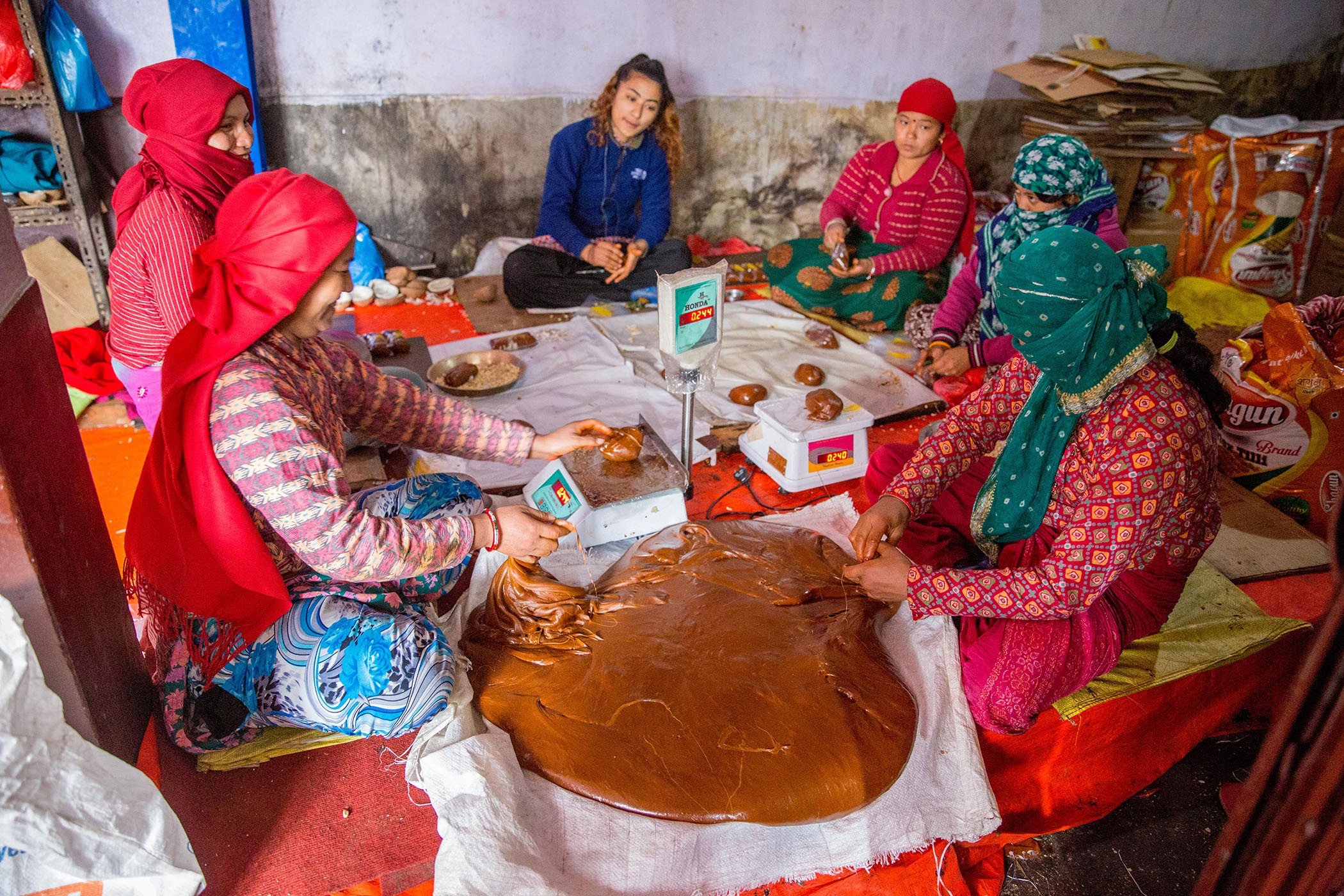 Do indulge yourself in these sweet delights. Afterall, they’re your locally produced time-honoured candies that have the perfect hint of bitterness that pleases even the pickiest of eaters. 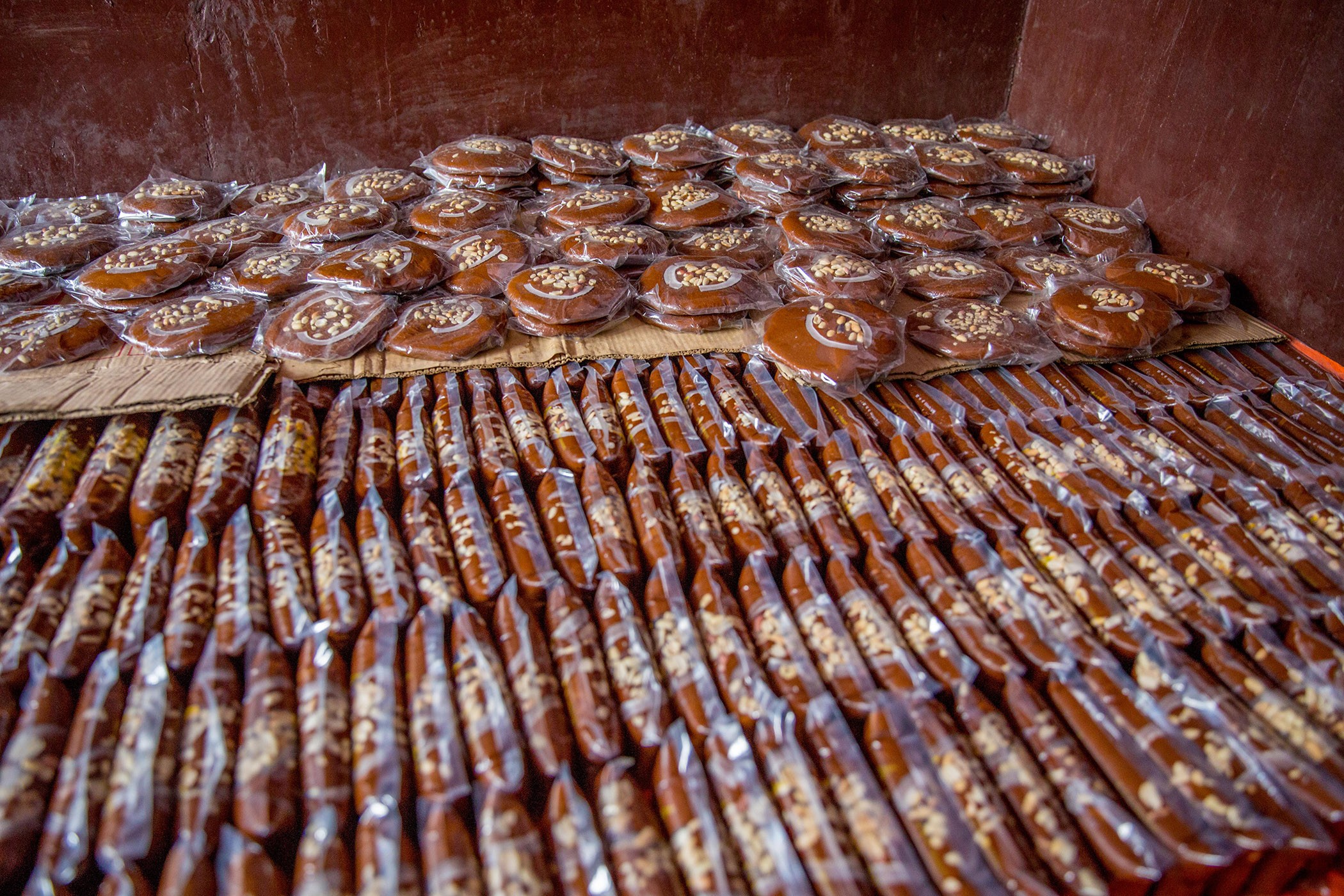