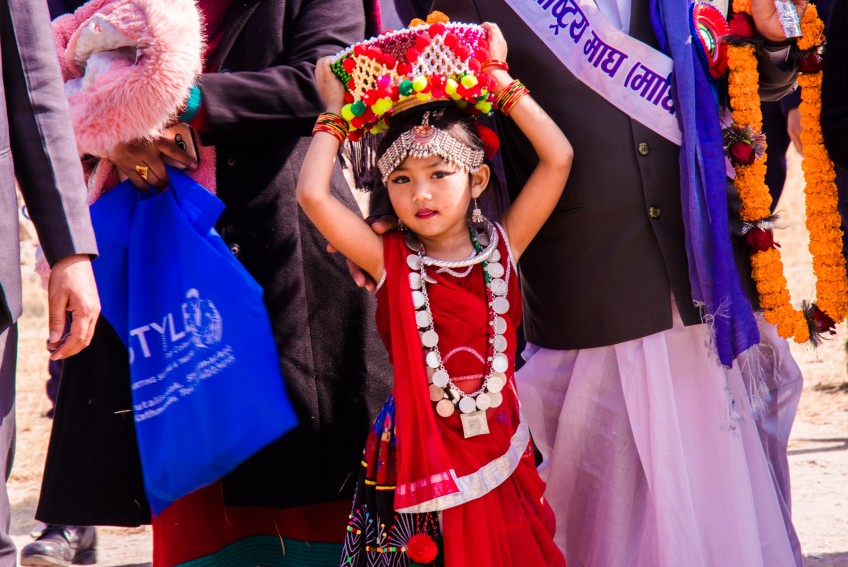 Maghe Sankranti is one of the auspicious festivals of Nepal which is believed to signify the end of the harsh winter and welcome spring with joy and festivity.

Basking in the warm mid- January sun, children eagerly waiting to devour the sweet teel ko laddus, women massaging their hair with mustard oil, communities uniting for a glorious program, Maghe Sankranti is a festival of families coming together. As a child brought up in a Newari household, Maghe Sankranti meant lavish feast and sweet molasses. A little older in my teenage years, it meant taking a day off from the mundane school work, lounging in the warmth of the sun and getting a mustard oil massage. Now, in the initial years of my adulthood, it is a symbol of unity in diversity- a festival that is shared and rejoiced by people of many castes and ethnicities.

Considered as one of the coldest days of the year, Maghe Sankranti is observed in the first day of Magh in the Bikram Sambat calendar ( tenth month of the Nepali calendar). Also known as Makar Sankranti, it is also considered as a major harvest festival in the Indian subcontinent. As a prominent solstice festival, it marks the movement of the sun from one zodiac sign to another. Although Hinduism follows the lunar calendar, Sankranti actually is a solar event and takes place approximately after 21 days of the winter solstice. It is believed that at the end of this day, the heart-wrenching winter will diminish and the spring will breeze prosperity and good health.

Religiously, Maghe Sankranti marks the death of Bhishmpitama, son of Ganga, who according to the famous chronicles of Mahabharat has the power to decide the time of his death. Right after the epic battle of Kurukshetra, he chose this day for mortality and discovered the wisdom of life and death. It is believed that the ones who pass away on the day of Maghe Sankranti receive liberation of the soul.

Maghe Sankranti, like any other festival in Nepal, has a folktale associated with it. Riding down my memory lane, I remember my grandma telling me a story a benevolent merchant in Bhaktapur with an outstanding business of sesame seeds. According to legend, the sales of sesame seeds were so good that it never diminished. Amazed by the fact, he began investigating the reason behind it and on his search, he found an idol of Lord Vishnu hidden deep inside the sesame seeds. Thus, to this day, the idol is worshiped as til Mahadev idol with a belief that it would bring good fortune and wealth.

Traditionally, Maghe Sankranti commemorates the beginning of harvest season and is marked with great festivity. Devotees take a dip in the confluence of holy rivers and special delicacies are consumed only this time of the year. Chaku, or hardened black molasses, is dipped in a thick paste of clarified butter accompanied by boiled sweet potatoes or Sakarkhanda and yam or Tarul, smeared with ghee and sprinkled with salt special.

In Newari community, this day is considered the day when men are fed these delicacies. Women usually take ghee and Chaku during their post-delivery period. Men, on the other hand, don’t have particular occasions so, on this day they are allowed to have as much as possible.

Tharus, on the other hand, celebrate Maghe Sankranti as their new year. Maghi- as they call it- is celebrated with great festive for three whole days with families coming together to have a great feast. An array of Tharu cuisines such as crab pickle, fish, teel ko laddu (sesame seed ball), pork curry and a variety of bread like Bagiya, Dhikri and Jharra Roti are served. The feast is followed by various Tharu dances from different communities. Maghi holds special importance to married women too because the festival has a special ritual of providing them with gifts by their parents and brothers called “nisrau”,  a nice package consisting of salt, rice, and other grocery items.

Maghe Sankranti is one of the auspicious festivals of Nepal. Apart from the natural heritage, Nepal offers, the intangible and the tangible heritages are something that you cannot miss.

Maha Shivaratri: The Night Of Shiva