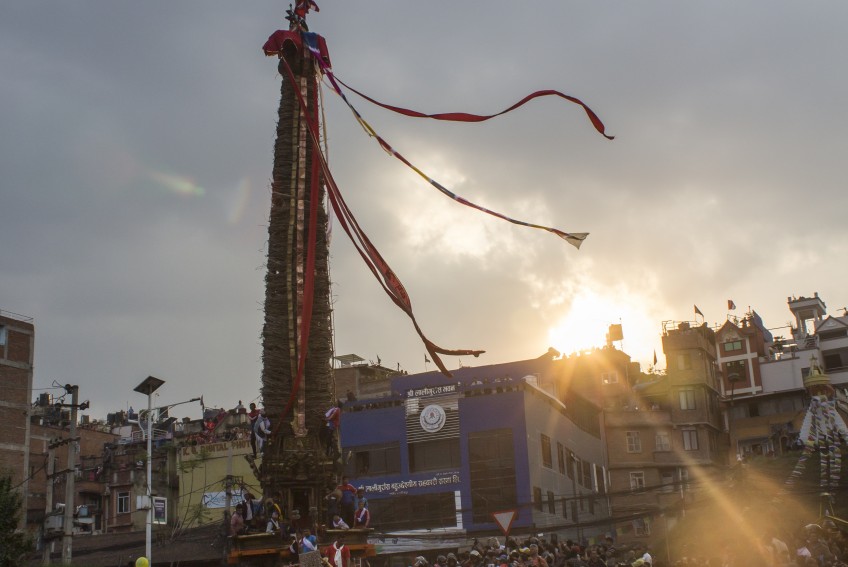 Rato Macchindranath Jatra, the grandest festival of Nepal, has finally begun. The tall chariot is on its journey through Patan

The Year 2075 has made an entry with celebrations, and this time it is a religious one. The much-revered Jatra of Rato Machhindranath has started in Lalitpur district. The Jatra of lord Machhindranath also known as the god of the rains, started yesterday with the pulling of the chariot (rath).

The 32 hands long chariot has been completed after many days of hard work. The chariot had been built and decorated in Pulchowk, from where the chariot was pulled by locals all the way through to Mangalbazaar. In the coming weeks, it will pass through Lagankhel, Kumaripati and finally to Jawalakhel.

On the first day, April 19th, the chariot was pulled by men, women, and children merrily towards Mangalbazaar. Along the way, the pedestrians and locals were seen worshipping the red god resting inside the chariot. Celebrating the initiation of the grand festival, the observers were seen dancing to the traditional songs and music alongside the chariot.

The coordination observed while pulling the chariot every year is commendable. Following their leader's calls, the strong men and women pull the heavy two-wheeled chariot with the help of two ropes with great synergy as they shout 'Haiste Haiste'- simply exciting just to watch.

The pulling of the chariot will last two more weeks. With music playing, dancing, and celebration, this is indeed one of the most enthusiastic and grand festivals of Nepal. If you want to attain blessings of the Rato Machindranath, then the chariot is currently on its way through the streets of Gahabal. It is definitely impossible to miss this tall eye-catching structure if you are travelling through Patan.