An explosion of aroma to welcome the holidays 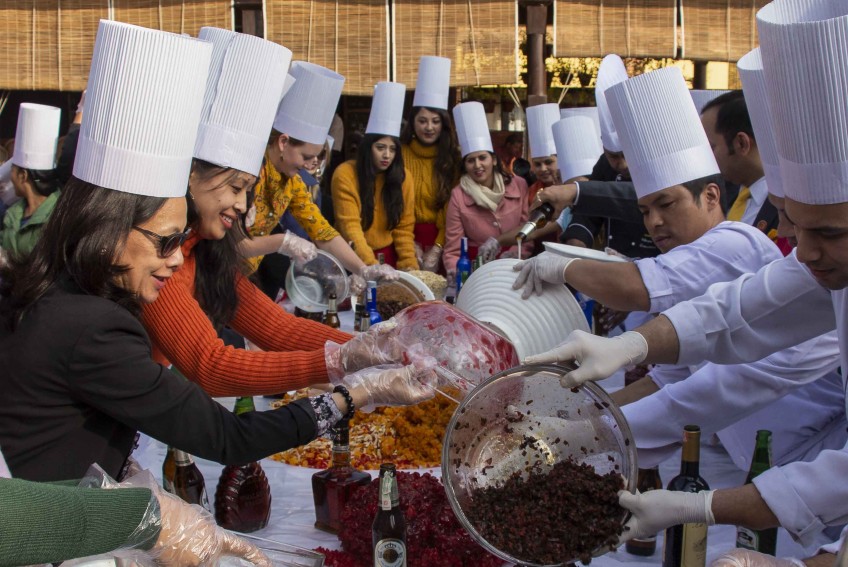 On November 25, Hotel Shangri-La commemorated its annual cake mixing event. As you make your way into the beautiful Shambala Garden your eyes immediately notice the long rows of tables lined up for the event. The sunny day made the environment even more pleasant as the bowls of ingredients and bottles of beverages give out a twinkle that you would cherish for the rest of the day.

The table was lined up and decorated with varieties of fruits and nuts such as dates, dry cherries, peanuts, raisins, walnuts and what not. Alongside the massive bowls of fruits and nuts were bottles of brandy, rum, vodka, and wine. And you can’t get mixing without spices. There were even more bowls, containing: cinnamon powder, cloves powder, nutmeg powder and much more.

Every guest was then super enthusiastic about putting on aprons and chef hats so that they could partake. After the Executive Chef, Vikram Kumar gave some insight about the tradition all hands surrounding the table came into action. The fruits and nuts were getting swayed from one place to the other, rum and wine were being poured here and there and everyone had a smile on their face. Celebs such as Barsha Lekhi, Neelam Chand, Sahara Basnet and Anshu K.C also had their share of fun in this colourful mayhem.

Executive Chef Vikram Kumar told us that this tradition has been ongoing at Hotel Shangri-La for ten years. He also mentioned that the event carries a lot of excitement and the preparation has been done for weeks. “While the management part can be a bit stressful, it wasn’t anything that our team of talented chefs couldn’t handle. I am very satisfied with how we setup the event and how it went”, he insisted. As per the tradition, all the fermented ingredients will later be used to bake Christmas goodies such as Plum cakes and puddings.

However, the event wasn’t limited to cake mixing. Hotel Shangri-La invited kids from Niten Memorial School and provided a support cheque to the founder of the school: Nicole Thakuri Wick. This support cheque handed over by General Manager Sameer Banerjee was provided with the intention of providing scholarships to students and giving them a better future.
Overall, the event was as exciting as promised. Varieties of people and varieties of ingredients, the only kind of mixing that leaves everyone with something to look back to.

Lunch For Children At Hotel Yak And Yeti