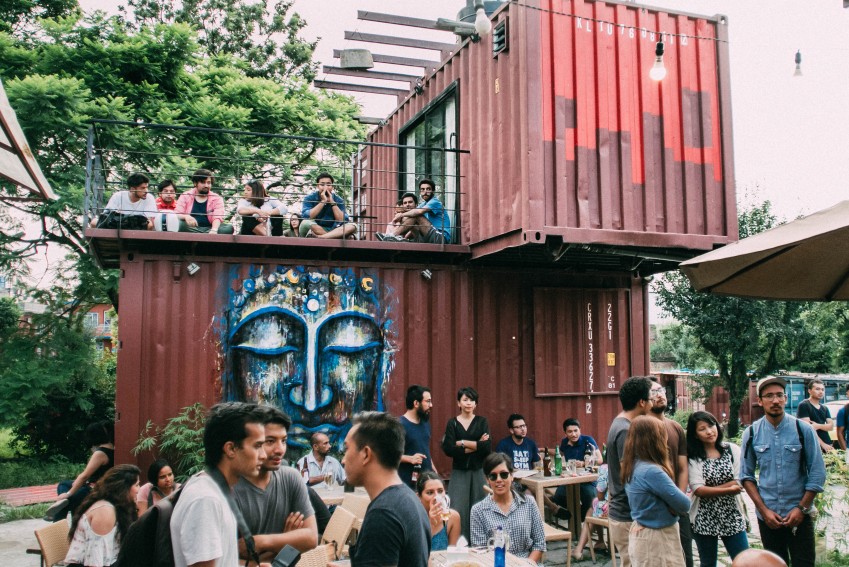 Around 20 young people gather in a Cafe outside of town.

We got here a few days ago. The city is an assault on the senses. The smells, the colours the sounds. The unpaved roads in the centre, the rickshas, the mud and the dust. In some places so thick that it is almost tangible. But there is also this. Rs Moto. A quaint, hip and modern joint in a more open part of town. A cafe bar made out of containers that is a motorcycle-customisation spot as well. It has a stage, sells brownies and food made by young people.

We've been to many such places in the world. DEUS ex machina being the most obvious coming to mind, but this spot is something more.

It feels a lot more intimate. The Musician is clearly a friend of the owners.

We were invited by the extremely talented nepalese photographer and filmmaker Prasiit Shapit , who is a close friend of Phatcowlee  as well. Phatcowlee aka. Rajan Shrestha, is a Kathmandu based multimedia artist, who is at the forefront of the growing Nepali, interdisciplinary, contemporary art scene.

Before his transition into electronic music, he was a member of the successful rock band Jindabaad , which was respected by fellow artists and broader audiences alike. Exploring a softer, quieter, more personal site, he now stands humbly on the stage in front of us, fiddling about with the variety of instruments he brought along, before the show begins.

There is a keyboard, a guitar, a ukulele, his computer, a microphone and a mixer. We are just travellers who came to be here from far away. Passers-by, who never know what the next day may bring. Yet, just seeing Rajan with his instruments, I already know one thing: There will be art.

You can tell by the way the artist caresses his tools. By the wear and tear of the buttons and nubs. By the tone in his voice and the look in his eyes when you try to interview him. It reads: "What I have to say cannot be said in words. That is why I make music.'

At 5 pm the colourful mix of locals and foreigners in the spot has increased to 120 people and Phatcowlee begins to play.

As soon as the music starts, everyone falls silent. The sounds evoke memories of Hans Zimmer, Daft punk. Death cab for cutie. The postal service, Brian Eno, De Phazz. Country, Jazz, Blues, Drum 'n Bass . Coldplay's Chris Martin and a bit of Erykah Badu. But there is also something unheard here. Original Nepali melodies, that are new to my ears and create a third space. Not West, not East, but here.

Where am I?  Lost. Floating away with the music. In the midst of all these people.  I knew it : Art, doing it's magic. Creating an alternate space and a path, that takes you out of your reality and allows you to be somewhere else for a while. It turns strangers into a group of fellow journeymen, bound by the music as a common vehicle. Art is a holiday for the soul, that this crowd gladly embarks on.

Talking to a few of Rajan's old fans after the gig, I realised that for some, he even produced a permeant shift in perception. That he, quote, changed their "idea of what is possible and what isn’t." That is called inspiration and it is one of the most powerful wonders of art. It is the skill of not judging the world by what you know, but to stop judging it at all for a moment and to instead open your mind. We all have this ability. The only question is which channel we communicate with.

After having been in Kathmandu for a few days now, Phatcowlee's EP release is, in my humble opinion representative for what is going on in the Kathmandu underground art scene as a whole. The scene is small. There is no mass hysteria when the man comes on stage. It is populated by a very intimate core of people in different stages of their artistic development. From established artist in all media, to amateurs, beginners and mere spectators.

There is no division in between the art forms. We met photographers, videographers, sculptors, writers, filmmakers, other musicians, art collectors, curators, tattoo artists, art mechanics, interior designers, journalists and more. Even established artists are accessible and seem willing to share and learn with everybody else. This creates a beautiful environment for younger, upcoming artists.

As Aman Karna, a younger, local musician, from the great band The Phosphenes put it :

"I started to listen to Rajan when I was 15 years old. He was my idol. I am 25 now and I have met him countless times. He was invaluable for my development as an artist.

Nepal is suffering from a huge brain drain. Young Nepalese people leave the country in masses to find work abroad. Some of the more educated migrant workers might find skilled positions, but many young people feel forced to waste their lives away at the bottom of the international pecking order. What they all have in common, is that they are disillusioned with their country. Nepal has made most headlines in the recent past with poverty, civil unrest, water-and electricity shortage, and because it struggling in the lower third of the human development index.

Art is invaluable for the identity of a county. It is the non-material glue that can give hope and value. We all know what it feels like to be energised by a few, special words or a song. In the past, these mechanisms often took generations to unfold their true power. But here, in Kathmandu, in the century of the internet, virtually everyone in the scene can listen to an album on the day it is released and speak live to the artist only a few days later.

The scene here is a modern day, fast evolving, interdisciplinary, subculture that does a very important job. Now it needs to start demanding the mainstream attention that it deserves.The children of the future have a right to hear it's voice. Nepal doesn’t need anymore negative headlines. As a matter of fact, no one does. The world doesn't need more examples of how not-to-do things,  but examples of good people who are who they are. We are creating for the people that don’ t measure value in word counts or clicks. We are writing for the ones, that can and need to hear this message.

If you are one of these artists, listen to me:

Follow your heart. Your work is so much more valuable for the future than anything the experience-industry can ever pay you for. If you feel us, please like, share or comment below and show the sceptics that we are here. It is time to show some colours. Thank you for these lessons, Nepal. And we have only just arrived.

Arternatives  is a project by four artists from four different continents who travel the world to connect with creative communities.

We believe that the world is full of open-minded individuals who are positively influencing their environment.

It is our mission to find and connect them.