Bajrabarahi: The Prized and Mysterious 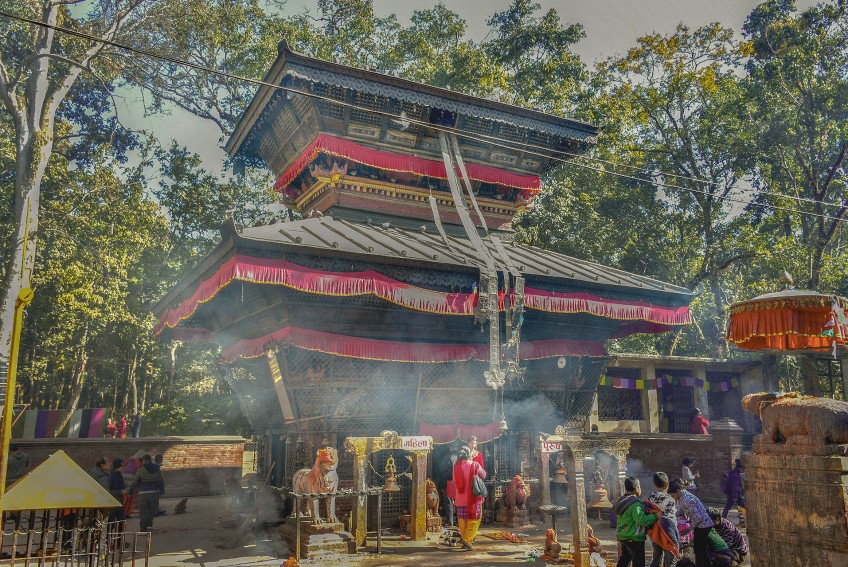 Located south of the Kathmandu valley, the Bajrabarahi temple is a popular site for worshippers and visitors alike for its mysteries and sacred spirit.

8 kilometres south of Patan lies the temple of Bajrabarahi, the most famous and the most frequented of the four ‘Barahi’, a goddess with a boar heard and a human body, temples across the valley. The name of the temple, Bajrabarahi comes from the Barahi goddess and Bajra, a mythical weapon, assumed to be a sword of thunder and lightning.

Believed to be built on a Monday in the month of Chaitra between 784 and 786 B.S.  (approximately 1664-1666 A.D.), the temple is said to be established by King Shree Niwas Malla of Patan. Before the temple was built, legend has it that initially, there was a small pond where the temple lies today, and the Goddess of Bajrabarahi came into existence and took over the area.

Of this temple, there is a lot that remains to be mysterious and unknown. The most enigmatic of secrets is of the missing ‘gajur’ or the pinnacle of the temple. Temples across the country, including the three other Barahi temples, usually have this gajur as it is a part of the architecture since long ago. The absence of the pinnacle or spire is often believed to be because of a priest’s nightmare that depicted the gory death of the workers if they ever tried to put on the gajur. Because of this terrifying dream, there was a halt in the placing of the gajur, which is put on last and ever since the Bajrabarahi temple has been without one.

The inside of the temple features various incarnations of female deities and the outside of the temple is guarded by two tiger statues, the vehicles of Goddess Kali. A statue of a bull, the vehicle of Lord Shiva, placed further out on the premises also plays a role in protecting the temple of Bajrabarahi. Many offer milk and other dairy products such as ghee or curd to the bull in hopes that the offerings will help win over the Goddess’ protection over the wellbeing of their cattle.

One other superstitious belief that circles the locals of Bajrabarahi is that if the twigs and leaves fallen onto the ground the premises of the temple are purposefully taken outside, then those who are responsible for this deed will be cursed and will fall ill. The leaves that leave the temple unintentionally will be brought back by the powers of Goddess.

Over the course of the year, the temple hosts three different jatras or festivals of sorts— one that lasts nine days during Navaratri, when worshippers pay homage to the various incarnation of the Goddess Kali, one called Marasi Jatra and another called Purney Jatra during Kartik Purnima and Chaitra Purnima respectively. Many sacrifices in the form of animals are made during this time in order to appease the Goddess in return for her protection.

In the midst of the forest and a 45-minute drive from the heart of Kathmandu, a visit to Bajrabarahi usually calls for a family picnic with close ones or a peaceful walk nearby to watch the various types of birds flocking the surroundings. While enjoying a day trip with friends and family is always fun, exploring the temple of Bajrabarahi and its enchanting history is something to go on your newest bucket list to Nepal.

Simran Dali is a content writer at nepaltraveller.com. Apart from being an avid writer, she enjoys Korean delicacies and she's been to various regions across Nepal because of her love for travelling.