Bathed in milk and saffron 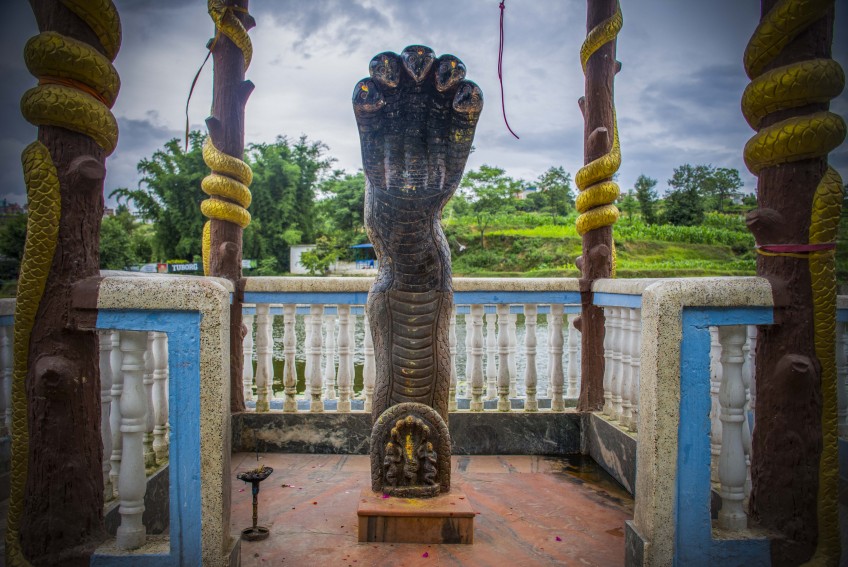 Shrouded in myths and legends, Naag Panchami is a time of rainfall and revelry

Naag Panchami is a celebrated affair in the mystical Hindu culture. In Nepal and throughout India where religious adherents live, serpents are worshipped on the fifth day of the bright half of the lunar month of Shravan. Representations of god in the form of snakes gilded in silver, carved on stone or wood, painted on walls is a sight central to only this region.

On the day itself, waking up to the jingle of bells, religious chants and a poster of the serpent deity besides the doorway is a common sight in Hindu households. Then given a bath with milk, it is believed the revered Naag bestows blessings for all.

Well documented in Hindu puranic manuscripts, Mahabharata being the most popular, the epic story narrates how Astika, the Brahmin son of Jaratkarus stopped the Sarpa Satra of Janamejaya, ruler of the Kuru empire which lasted for 12 years.

This yagna was performed by Janamejaya to annihilate the race of all snakes. To avenge his father’s death at the hands of Takshaka, the king of snakes. The fire sacrifice was intervened by Astika on the Shukla Paksha Panchami day in the month of Shravan, thus, saving Takshaka, the king of snakes and his remaining race at that time. Since then, Naag Panchami is celebrated in revelry every passing year.

The ritual is also particularly remembered for the fight between Garuda and a great serpent. Held in honour of the great serpent on the coils of which Lord Vishnu rests, the observance of this festival is shrouded in myths and legends.

Many other mythological texts such as the Agni Purana, Skanda Purana and Narada Purana along with folklore also give detailed accounts on the worship of snakes. The divine festival honors the Naag Devata along with other serpent deities such as Anant, Vasuki, Shesh, Padma, Kanwal, Karkotak, Kalia, Aswatar, Takshak, Sankhpal, Dhritarashtra and Pingal. However, it is a debated topic among historians who believe they weren’t serpents but Naga kings who were worshipped as gods. Not only in Hinduism, but also in Buddhism and Jainism snakes hold a sacred place.

With precision, Nagas are worshipped with milk, sweets, flowers, lamps and even sacrifices. Images of Naga deities made of silver, stone, wood, or paintings on the wall are first bathed with water and milk and then worshipped with the reciting of mantras. Fast is observed and some often believe it protects one from snake bites.

Numerous places across India and Nepal hold boisterous fairs with snake charmers and their pets gracing the event, a spectacle you will have to see to believe. Receiving increased footfall, temples of Lord Shiva is another sight to behold.

The pious fanfare at Naag Pokhari and Naag Daha is complete with a lively crowd, offerings and a colourful rangoli (a pattern made of coloured powder on the floor). The rangoli depicting the five-hooded snake is created on the floor with a brush made of wood or clay or precious metals such as silver or gold with sandalwood or turmeric paste as the paint. To this day the historic site of Naag Pokhari and Naag Daha receives huge numbers on the auspicious day, ushering in good tidings.