The Spirit of Spices 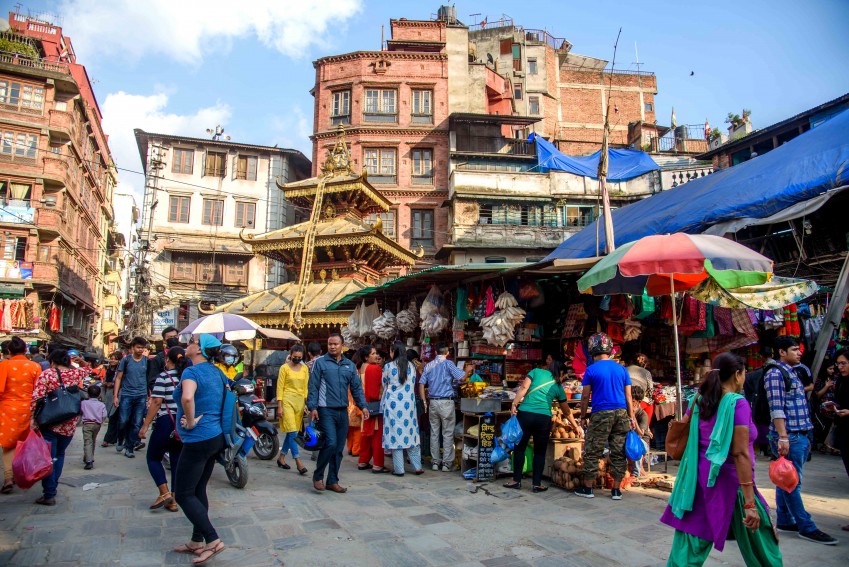 Friday afternoon and Asan Tole, a crowded market square and the heart of traditional shopping in Kathmandu, fringed by ancient buildings and temples, was filled with vendors of household goods, cultural handicrafts, clothing, vegetables, foods — you name it. Thronged with the bustle of hundreds of people preparing for two major celebrations approaching, Dashain and Tihar, and the hustle of shopkeepers hawking their goods while walking down the narrow alleys, Asan is at the height of its business. With all things Asan has to offer, one of the most popular, especially at this festive time, are spices. Asan Tole is the main place in Kathmandu to find authentic spices of the highest quality that come from all over the Indian subcontinent.

Spices, or ‘masala’ in Nepali, reflect the vibrancy of Nepali life and have been a prevalent part of Nepali culinary culture for centuries, tracing all the way back to the Silk Road Spice Routes (Maritime Silk Roads) when trade of goods, including a huge variety of spices was flourishing along the passages from China to India and Nepal in one direction, and all the way from China to the Western world in another. Although Nepal was not a proper stop along the Silk Road, recent evidence of textiles that most likely came from China and India, found in Upper Mustang, indicates that the route hit a stop in Nepal as well. This means that along with textiles, spices were also traded through this route.

Especially during this time of year, an example of masala and its role in religion and tradition is the packet of masala put together as a gift while receiving tika and blessings during Dashain and Tihar. These packets are made up of walnuts, cashew nuts, almonds, raisins, dates and dried fruits.

Aside from the enhancing effect masala has on flavours of foods, traditionally, spices are believed to have medicinal value as well. Turmeric, the spice that gives a Nepali curry its distinct colour, is known to be an antioxidant that protects against cancer, as well as a liver cleanser. Ginger, which gives a pleasant kick to Nepali dishes, prevents colds and regulates blood pressure. Coriander, which is used both for its seeds in curry powder, and its fresh green leaves as toppings for salads and achaar (pickle), is also an antioxidant and helps treat diabetes.

After wandering around the square for a while, searching for the row of stalls with spices, Charan Pradhan’s Saffron Centre was open and clear of swarming people. Pradhan’s small pasal (shop) in the midst of the hectic streets, supplies buyers with fresh Himalayan spices and herbs. Saffron, a deep crimson thread, is the most expensive spice sold at his shop – hence the name. It is difficult to cultivate and mostly imported from India, although saffron cultivation is starting up in some areas of Nepal now as well. “I have been working as a vendor of spices my entire life, basically before I was even born; my family had carried on this tradition for four generations but sadly I am the last in line from my family to sell spices since my children are not interested and are occupied in other jobs.”

Despite the popularity and zeal for life Asan offers, which has not died down after hundreds and hundreds of years, something that unfortunately slowly is, is the business of selling spices. As Charan mentioned, there are only a limited number of vendors selling spices now. This is no longer an adequate occupation to support families due to the increase in other job opportunities and the increase in competition from large businesses producing the same spices in greater volume and efficiency, although the spices from Asan are superior in quality as they are authentically and freshly ground.

Next stop in Asan was the Indira Masala Pasal, owned by a rotund, Newari middle-aged woman, who ground all of her spice products in her own home. “I spend four to five hours a week grinding spices in my kitchen. In addition to the traditional curry spices, I also sell mixed packets of tea masala, vanilla, along with raisins, walnuts and cashews.” Nepali masala isn’t only found on the streets of Asan and in Nepali curries these days. As one of Nepal’s growing exports, it is spicing up cuisines in other Asian countries and across the world in Europe too.