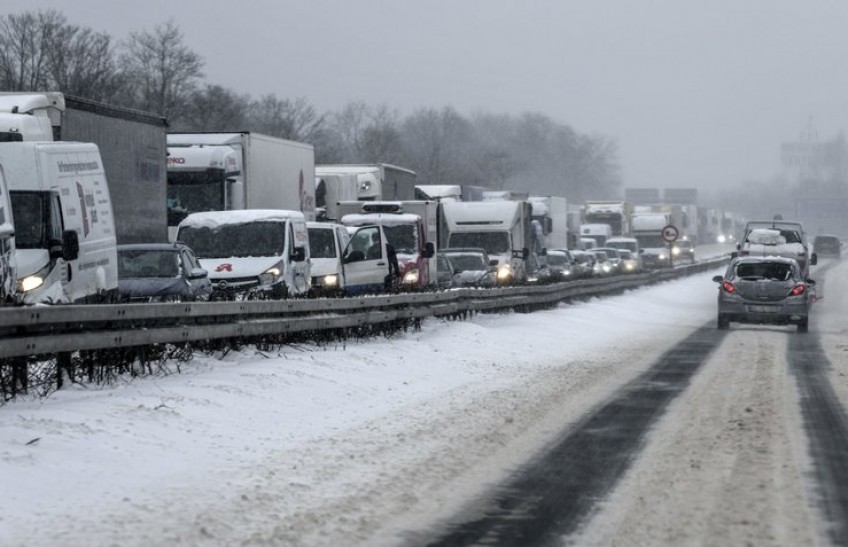 Hundreds of vehicles were trapped on the A2 highway in western Germany all night in that traffic jam, Bielefeld police reported early Tuesday.

Heavy snowfall in Germany led to more severe traffic disruptions Tuesday, including a 37-kilometer (23 mile) overnight logjam in which hundreds of cars and trucks got stuck on a highway for hours in sub-zero temperatures.

Hundreds of vehicles were trapped on the A2 highway in western Germany all night in that traffic jam, Bielefeld police reported early Tuesday. Rescue teams went from car to car handing out blankets and hot drinks, the German news agency DPA reported.

Traffic jams due to snowfall and icy roads were also reported in Brandenburg state in the east and in Hesse state in central Germany. Train service was also partially canceled in several regions as snowplows were working around the clock to free the tracks of ice and snow.

The country’s transportation minister called on Germans to stay at home and avoid traveling. “When conditions are this extreme, even the best turnout heating and the best snow plow can reach their limits,” Andreas Scheuer said.

More snow was predicted for northern Germany for Tuesday especially for Schleswig-Hollstein, the German Weather Service DWD reported. Parts of central and northern Europe have been gripped by a cold weather spell since the weekend.