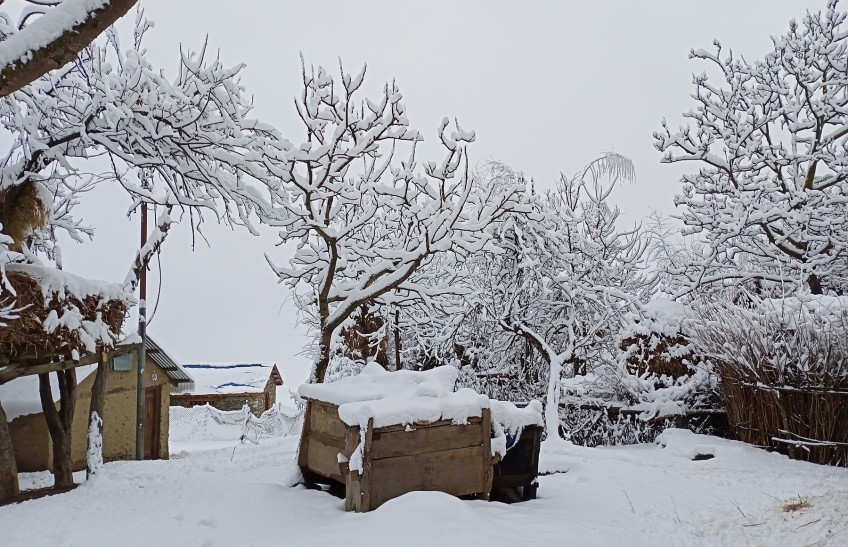 Humla’s normal life is getting tougher with the sharp decline in temperature following snowfall and rain. As Humla is a high-hill district local people here have experienced troubled life after the abrupt drop in mercury particularly in the district headquarters Simkot and northern Tamkha rural municipality area.

Snowfall has gripped the higher hill of the district including Simkot since Sunday afternoon. A cold wave has immoderately increased with snowfall and rain in different parts of the district lately.

Locals in Humla are gathering around wood-fire to keep them warm and protect them from the cold wave.

Simkot’s temperature has dropped to minus following the sharp rise in cold waves with variations in weather conditions since Sunday. Now Humla has witnessed minus eight degrees centigrade.

Humla saw excessive cold wave after snowfall gripped the district up to 1,000 meters from the sea level. After the gradual rise in the cold wave, the traders and other general public residing in the district headquarters Simkot and its market area are putting them around wood-fire to allay cold effects.

Normal life has been most affected in the northern part of Humla with erratic weather changes since Sunday, locals said. The service delivery of government and non-government organizations has also been affected with all-pervasive cold. Besides, day-to-day works have also been halted in the offices owing to an unbearable cold wave. It has also badly impeded livestock rearing and crop harvesting in the district, said Kamal Bhandari, a local. Areas in and around Simkot are being covered with thick snow. It has also obstructed people’s mobility from one place to another.

Almost all residents of human settlements of the northern Humla have left their areas in search of warmer shelter.

Along with the cold wave, the Simkot area has also witnessed wind storms since this morning. Snowfall seems to be continuing in the district with thick clouds in sight.

Seven Bridges To Be Completed In Koshi Corridor

Britain To Roll Out AstraZeneca Shots