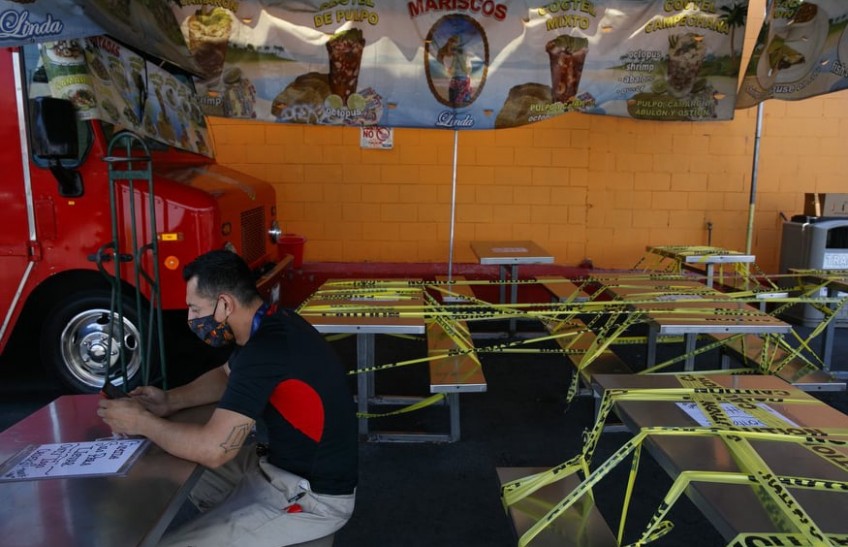 To control the spread of the coronavirus, bars and inside restaurant dining are banned throughout California

Bars and inside restaurant dining are banned throughout California, while indoor religious services, gyms and hair and nail salons are again off-limits in most of the state, Gov. Gavin Newsom said Monday in issuing a sweeping set of closures to head off surging coronavirus cases and hospitalizations.

The order is part of the state’s new strategy to control the spread of the virus by focusing on limiting indoor activities to reflect public health officials’ evolving understanding of how the virus spreads.

Earlier in the pandemic California closed beaches, campgrounds and state parks as it sought to limit interactions of people from different households. But as data showed the virus was most likely to be transmitted indoors, the Newsom administration began modifying public health orders, including ordering people to wear face coverings and leaving outdoor activities alone.

Newsom has repeatedly implored people to refrain from social gatherings and he expressed frustration that many aren’t following the guidance.

“COVID-19 is not going away anytime soon, until there is a vaccine and or an effective therapy,” Newsom said. “Limit your mixing with people outside of your household. It’s just common sense, but the data suggests not everyone is practicing common sense.” The city of Los Angeles immediately implemented the mandated shutdowns and Mayor Eric Garcetti said he wouldn’t hesitate to go further.

Earlier this month the city created a color-coded system to designate the threat level from the virus and corresponding shutdowns. Rising numbers of cases and hospitalizations now have it at orange — the second-highest designation, when people are to minimize all contact with anyone outside their household.

“Red is when everything shuts down again -- everything, to our strictest level. And I do want to warn people that we’re close to that,” Garcetti said. Newsom’s move faced immediate resistance from religious groups and business organizations. Fred Jones, attorney for the Professional Beauty Federation of California, suggested many hair salons may not comply with the order.

He said there is “no evidence that a single contagion has been spread in a salon since we’ve been allowed to reopen.”

California was the first state in the country to issue a mandatory, statewide stay-at-home order aimed at slowing the spread of the coronavirus. Most businesses and churches voluntarily complied, scrambling to let employees work from home and moving worship services online.

Public health officials praised Newsom, crediting the March 19 order with limiting the virus’ impact in the nation’s most populous state, which has about 40 million residents. But the order devastated the economy, causing more than 7.5 million people to file for unemployment benefits.

Newsom moved quickly to reopen the economy in May but by mid-June there were signs that the virus was resurgent and when July arrived Newsom took action. For counties on the state’s watch for rising virus cases, he ordered bars to close and indoor operations halted at restaurants, wineries, tasting rooms, zoos, museums and family entertainment centers like bowling alleys and miniature golf courses. On Monday, Newsom extended that order statewide.