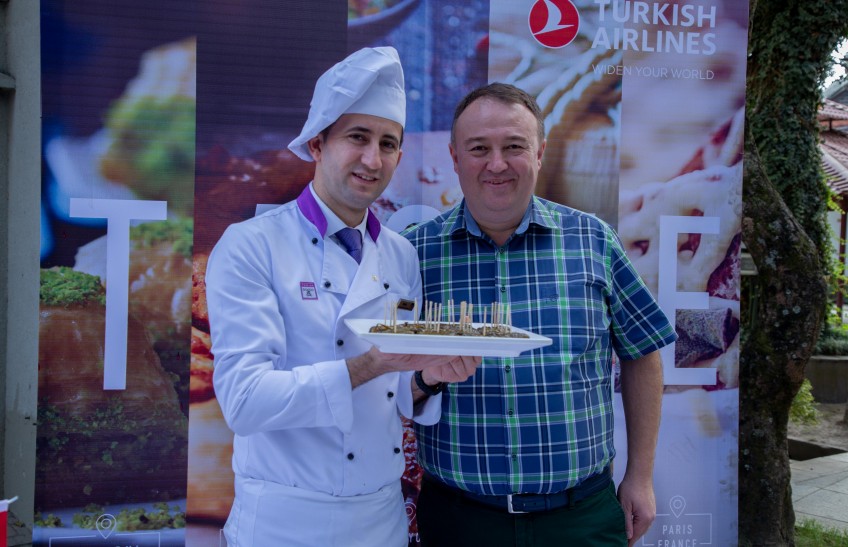 Taking the theme of the five senses in mind, Turkish Airlines organised a grand celebration for their 5 year anniversary in Nepal at Gokarna Forest Resort on November 18. Keeping with the brand's motto, "Widen Your World", Turkish Airlines flies to 304 destinations within 122 countries more than any other aircraft carrier company on the planet.

Taking the theme of the five senses in mind, Turkish Airlines organised a grand celebration for their 5 year anniversary in Nepal at Gokarna Forest Resort on November 18. Keeping with the brand's motto, "Widen Your World", Turkish Airlines flies to 304 destinations within 122 countries more than any other aircraft carrier company on the planet.

For their 5 years of togetherness with Nepal, the company incorporated the 5 senses in their programme -- see, hear, smell, touch and taste. For sight, Joey Ellis, an animator and teacher worked his magic on the attendants with his animations and his digital colouring of monochromatic photographs that date back to the Rana Regime. A live band, The Black Stone played on during the event and they represented sound. As for smell, a table with different brands of perfume ranging form Victoria's Secret to CK were laid for the guests to sample and buy. The fourth sense was represented by a mystery box which the guests were encouraged to put their hands in to guess what secret object was in there to win a prize. And the final element was most certainly the most enjoyable one as their in-flight chef served decadent Turkish delights like the Baklava, Sarma and Su Borek.

Abdullah Tuncer Kececi, the General Manager of Turkish Airlines, said, "The best way to celebrate is to spend time with friends - that's our main idea. And we want you to enjoy your time with family and friends. Thank you for supporting Turkish Airlines as our friends or partners- all of you are very valuable to us. As our motto is 'more' this year, we want you to enjoy your time with us a little more as we do our best to make your experiences worthwhile."

The airlines' magnificent observance of its anniversary was followed by various exciting games with generous prizes from the aviation company's side. The emcee, Sanjay Gupta excitedly announced a 'selfie game' in which guests were asked to snap a picture of themselves using their front cameras in front of a large screen that projected names of various cities- destinations where Turkish airlines offered its services, and post it on their social media. The winner would be selected via a lucky draw of sorts and presented with a business and economy class ticket to the place visible in their pictures. Former Miss Nepal, Sadichha Shrestha didn't hesitate as she clicked some gorgeous pictures in front of the screen.

The guests were served drinks and an assortment of grilled and fried meats, the classic Nepali Mo:mo, a Newari platter, and fresh pasta and grilled vegetables from a live a counter. Various media personnel, corporate houses and other leading figures from variegated industries were invited to attend the event.

Turkish Airlines' enhanced strategy is to make passengers feel special and valued throughout their travel by developing new innovations at each stage of travel, offering them pleasant surprises and bringing them a diverse and memorable travel experience. The location of its Istanbul hub allows for one stop connections between virtually any two cities on earth and the rich cultural heritage of it helped to form the basis of its award-winning service.